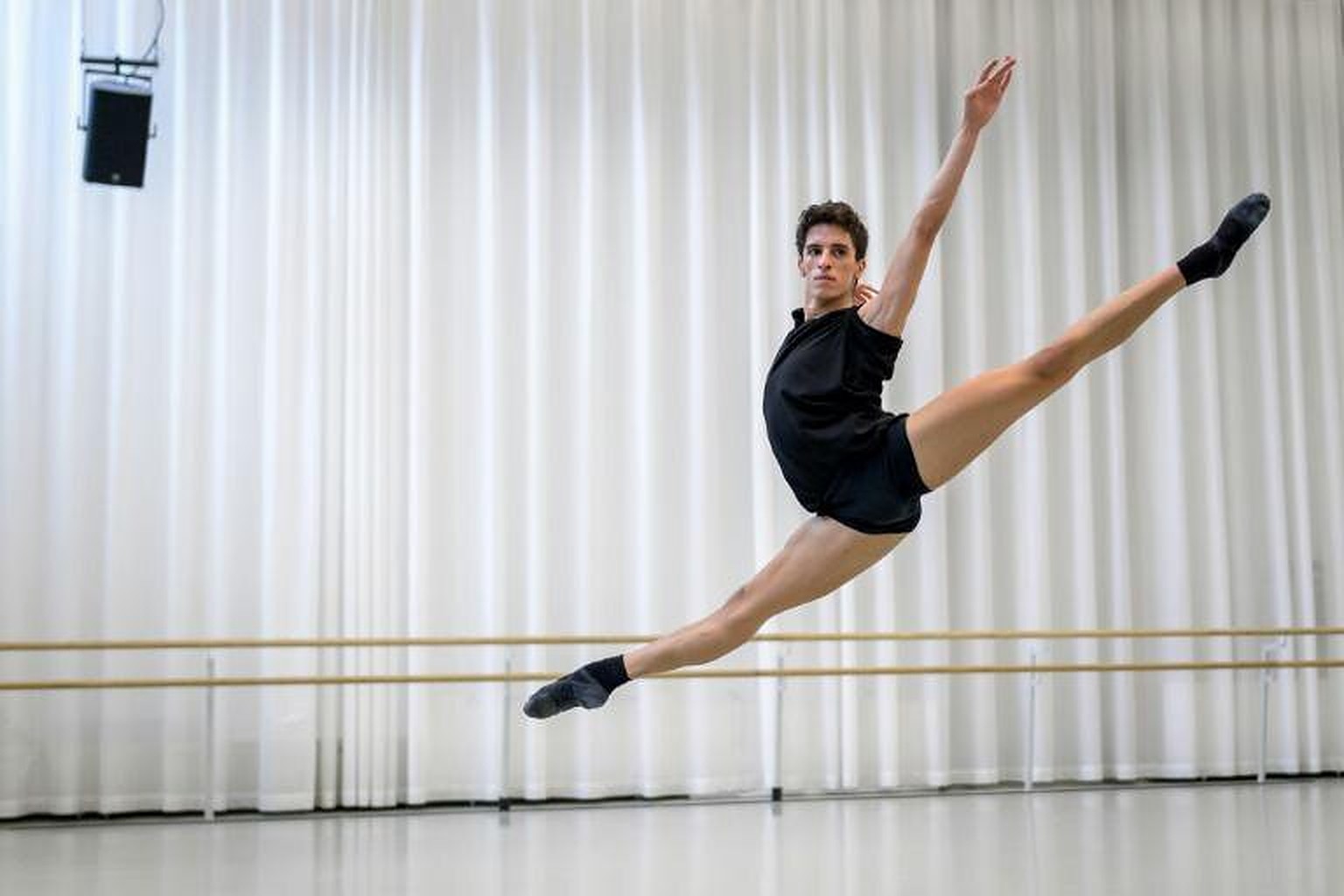 In the 1960s, Russian ballet dancer Rudolf Nureyev, who is widely considered the greatest male ballet dancer of his generation, was described as a “wild animal out of a cage” and “one of the most electrifying male dancers of all time.” Nureyev displayed masterful and unsurpassed control over his body in every move; to watch him dance is to see poetry and music in motion.

More than any other dancer, he transformed the role of men in ballet, and reinterpreted it, putting it on equal footing as that of women dancers. As a choreographer, Nureyev also reworked Swan Lake to give a more dominant role to the male dancer. Since then, male ballet dancers have risen to ‘icon’ statuses, with popular names such as Mikhail Baryshnikov and Roberto Bolle.

In Egypt, the history of male ballet dancers also extends back to the 60s, which saw the rise of big names like Reda Sheta, Abdel Moneim Kamel and Tarik Saleh. However, lack of adequate support, funding and training presents a growing risk of losing a whole generation of young male dancers in ballet.

Luca Abdel-Nour is a ballet dancer that we desperately need for our time; one who is not only hugely talented, but also believes in supporting future ballet dancers and blazing a trail in Egyptian ballet.

It is his early influences, his teachers, ballet instructors, and even family that helped write the scripts that end up acting out the rest of his life. Born in Egypt in 2003 to a French mother and an Egyptian father, Abdel-Nour was educated from a very young age in a private school where arts were considered a very fundamental part of education, which helped give him more exposure to theatre, music, applied arts and dancing.

Ballet was never his first choice, as he initially thought it to be a more feminine art form , which remains a widespread misconception in Egypt. However, after he attended a summer dance school in France at the age of 12, his interest in the art form grew after being encouraged by his instructors and mother who told him to give it a try.

“I originally thought ballet was just for girls because in Egypt, you don’t often see men or young boys in ballet. It is a very stereotypical conception of the art, and only girls are expected to do it,” Abdel-Nour says. “I realized that ballet is actually very difficult and athletic—it is both an art and a sport at the same time, which makes it not very easy to be able to practice. As a young person in Egypt, I wasn’t exposed to that many ballet artists, and we just have one ballet company here in Egypt, but I [hope] that ballet becomes more prominent in Egyptian culture.”

But it isn’t merely because of the gender stereotypes that ballet is misunderstood or under-appreciated. Normalizing arts education, such as dance and theatre, isn’t popularized in Egyptian society, which leaves many to consider it a ‘trivial’ profession or simply a hobby.

“There is no proper full ballet education, which is why it cannot be considered as a real profession like where you grow to be a true professional. Even for girls who dream of becoming ballerinas, they realize later on that it is hard to pursue it as a profession on its own. We have the Cairo Opera House and the Ballet Institute, but there is still a long way to go until the general public also considers it to be a form of art and education,” he says.

To pursue this education, Abdel-Nour first joined renowned Egyptian ballet dancer Ahmed Yehia’s class when he was 12, which helped deepen his interest and engagement in ballet.

“We did a bit of stretching and then a few basic dance moves, and then he came over to my mom and said, ‘where have you been hiding him?’” Abdel-Nour says. “He took me under his wing since then, and began teaching me rigorously and showing me the tough realities of ballet, and that I have to work extremely hard in order to excel in it.”

At first, his father also didn’t believe that ballet could be a real profession that could generate enough income and create a living, Abdel-Nour says. “He thought it was just a hobby, but it took some convincing from my mother and ballet instructors. If it wasn’t for the support that my instructors had for me, I don’t think my father would have ever agreed and supported me to pursue this career.”

‘You have to take a leap of faith’

Choosing to become a professional dancer is like taking a leap of faith, Abdel-Nour says. It is to absorb the pain, the loneliness, and all the challenges that come with it in order to be prepared for it to take complete control of your life. By the age of 14, he had won a year’s scholarship to a dance school in Budapest, and the following year, won a full-time place at the elite Zurich Dance Academy.

“One of the first challenges I had to overcome was leaving my home country and living by myself at the age of 14 in a European country that I [had] never visited before. You eventually have to trust your guts and just go with it; you basically have to take a leap of faith. But without doing this leap of faith, I would have never been where I am now,” Abdel-Nour says.

“When you’re 14, you don’t really know how life works. It was learning life lessons the hard way, compared to other people who finish school and then university when they are 22, and then eventually they go out and travel and experience independence. I had to experience all of it at the age of 14.”

Fierce competition in the arts, especially due to the limited opportunities and places to accommodate everyone, makes it even more difficult for young dancers like Abdel-Nour to achieve long-term success in their careers.

“There is so much competition, and every single year, maybe only 10 percent of dancers make it to a professional company. It is also a very subjective art form, sometimes it is about personal taste. So, even if you are a really talented dancer, the director might not like your style, and so you have to work hard to discover yourself and find your own style.”

What makes an artist special is not just that they are ‘technically perfect’, but also the energy, personality, emotion and grandness that they bring to the stage and their ability to electrify and captivate an audience.

“To truly flourish as a dancer and as an artist, you have to go out of your box and discover ways to make yourself unique, so that when you go on stage it is not just another performance, but a story where you analyze and interpret it in your own way, and you have to find yourself as an artist and be inspired by people and places around you,” Abdel-Nour says.

“I think that many people forget that I am still in the process of finding myself as an artist. It is a constant process. I am still 18 years old, and it is always evolving. Sometimes it is hard to keep up because you have to do your best every single day, you can never slack. It is a very intensive, seven days a week job, so there is no way out of it.”

A Story About Sacrifice and Perseverance

This is the definition of grit. At the tender age of 14, Abdel-Nour was able to relocate to Switzerland without knowing the language or the culture, and still thrive with all the many hardships and culture shocks that came with it. However, it also allowed him, as a young Egyptian dancer, to explore modern techniques and other contemporary performance arts, as well as European ballet, which helped him grow as a culturally aware and well-rounded dancer.

“Here in Zurich, the company is classically trained, but they do a lot of new repertoires, which is choreography that was created in the 21st century. This is different from Cairo, where they follow the Russian technique and choreography that has endured 200 years of wars and yet still survives to this day. I think it is a beautiful thing to explore a mix of both, because I believe it is important to explore new things and, at the same time, always go back to our roots, which is pure classical ballet.”

Earlier this year, Abdel-Nour became the first Egyptian to compete in the prestigious Prix de Lausanne and win second place. Pointe magazine described him as a dancer who is “quickly becoming one to watch.” Receiving widespread praise and support from home, he hopes that his achievements will encourage a new generation of Egyptian dancers to compete and dance globally despite their backgrounds or challenges.

“I want to come back to Egypt and be the director of a dance school or a dance company, because I believe that Egypt has a lot of undiscovered talent and opportunities. There is not enough funding or attention towards ballet, and it is a real waste. I hope that I can be part of something that will contribute to reviving ballet and dance,” Abdel-Nour notes.

“To young dancers, I say that you always strive for the best, and always show up with a fresh mind and keep a fresh look on things and stay motivated. There is definitely a place for everyone to succeed.”

A “blue mirage”: Biden’s presidency and the Iranian economy