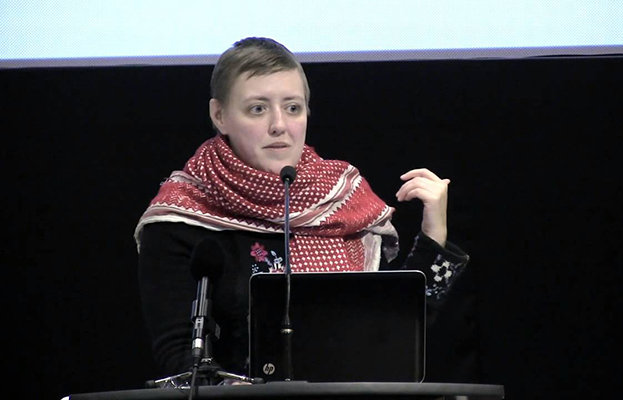 
All the way back in July 2003, I posted about Charlotte Kates, a law student at Rutgers University and one of the leaders of anti-Israel group New Jersey Solidarity. As I mentioned at the time, she seemed to take the position that terrorism is legitimate resistance and a tool for ridding the Middle East of the state of Israel.

A few years after my post, a letter from an acquaintance of hers was published on Jewlicious, revealing Kates was ahead of her time (eat your heart out, Rachel Dolezal!):

In fact, it reminded me that I went to college w/a girl named Charlotte Kates, an absolute genius ( perfect scores on her SATs and LSATS). We were on student government together at Douglass. Like many middle/upper white class white kids with no culture or tradition, she picked a new identity every year out of guilt of being a part of the majority. In ’97 she was scientologist, in ’99 she was gay, in ’00 she was Latina w/an accent, golden hoop earrings and a curious spray on tan

It seems the gay thing was just a phase but not the terrorism thing – Kates has been married to alleged PFLP terrorist Khaled Barakat since 2009.

According to Fatah, Khaled Barakat is a “member in the central committee of the PFLP.”

Barakat is also the International Coordinator for the “Campaign to Free Ahmad Saadat.” Saadat, the PFLP’s Secretary-General, was sentenced to thirty years in prison for heading an “illegal terrorist organization,” as well as for his involvement in planning many of the group’s attacks including the assassination of Israeli Tourism Minister Rehavam Ze’evi.

In fact, Kates is the coordinator of Samidoun Palestinian Prisoner Solidarity Network, which itself has ties to the PFLP.

Samidoun is a main advocate for the release of Palestinian prisoners, many with ties to the Popular Front for the Liberation of Palestine (PFLP) terrorist organization (designated as such by the U.S., EU, Canada, and Israel.

In February 2021, the Israeli Ministry of Defense declared Samidoun a terrorist organization and “a subsidiary of the Popular Front for the Liberation of Palestine (PFLP).” According to the Ministry, Samidoun was founded by “members of the PFLP in 2012,” and Khaled Barakat, identified by the PFLP as “coordinator” of Samidoun, “is involved with establishing militant cells and motivating terrorist activity in Judea & Samaria and abroad.”

Samidoun thanks this group of dedicated and revolutionary Palestinian artists in occupied Palestine and the diaspora who cooperated together to complete the song صولي  – Souli (leaping advance), which we dedicate in turn to the Palestinian people and their supporters everywhere, and to the Palestinian prisoners’ liberation movement imprisoned in Zionist and imperialist jails.

This song is part of the Palestinian heritage and reality of cultural struggle and resistance until liberation and return, for all of Palestine, from the river to the sea.

Here is a translation of the lyrics:

Kates has also spoken at forums calling for an end to the designation of terror organizations as such:

On her YouTube channel, she has videos from an assortment of terrorists, terror-supporters, and antisemites, including Leila Khaled and Hatem Bazian.

So the verdict is in: Charlotte Kates has not changed – except for her sexual preference, and ethnicity.

Re: Pentecostal Zionists and their support for the illegal Israeli occupation