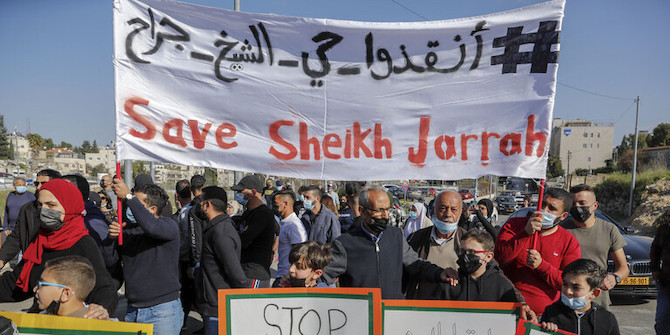 The false rhetoric of being ‘the only democracy in the Middle East’, or a democracy at all for that matter, has traditionally been used by Israel to whitewash its crimes and human rights violations. In November 2017, the former Israeli Prime Minister (and Israel’s longest-serving) Benjamin Netanyahu, was invited as a guest speaker at Chatham House in London. When asked about the Arab Spring and its regional consequences, Netanyahu ridiculed the idea of imposing a ‘Western’ culture of democracy in the Arab world. In the ‘undemocratic’ Middle East, as Netanyahu claimed, democratisation could essentially lead to ‘extreme instability, the loss of security, the loss of many lives, and political turbulence.’ Such rhetoric exposes more than blatant racism of Israeli officials; it exposes Israel’s fear of democracy and democratisation in the region as a whole. Pushed by fear of popular Arab uprisings, Israel is relentlessly investing in its relations with authoritarian states in the Gulf, becoming a source of autocracy promotion in the region, while betting on authoritarian regimes for its survival.

As President Trump came to power with a policy of unconditional support for Israel, authoritarian governments in the Gulf region raced to sign peace treaties, which were to become the Abraham Accords. For Arab states such as Bahrain and the UAE, the main objectives were to guarantee their strategic position in the region and their authoritarian resilience by gaining US-Israeli support. For Israel, the Abraham Accords symbolised a step forward in normalising its presence in the Middle East, with Netanyahu hoping to gain wide acceptance of Israel in the Arab world. Unlike previous peace treaties signed with Jordan and Egypt, the Abraham Accords made absolutely no demands for the resolution of the Israel-Palestine ‘conflict’ in exchange for the normalisation of Israel. In other words, signing the Abraham Accords signalled accepting Israel on its own terms for the first time in Arab history.

Israel’s relations with Arab authoritarian regimes go beyond normalisation and peace treaties. For states like the UAE, peace with Israel translates to unrestricted access to surveillance technologies used to track political dissidents. That said, Saudi Arabia, a close ally of Israel, has also been benefiting from Israeli surveillance technologies even without a formal peace treaty. According to Saudi Arabia’s Foreign Minister, Faisal Bin Farhan Al Saud, normalisation with Israel could bring  ‘tremendous benefits for the region as a whole’ and would be helpful on many levels including benefits from a ‘security perspective.’ However, Saudi Arabia’s Foreign Minister failed to mention that it was already Israeli technology which was used to spy on and crackdown on Arab activists in the region, including the late Jamal Khashoggi who was brutally murdered in Istanbul.

According to different reports published by the University of Toronto’s Citizen Lab institute, the governments of Bahrain, Saudi Arabia and the UAE have employed ‘Pegasus’ – an Israeli cybersecurity spyware – to spy on opposition activists and journalists. In 2018, with the help of the same software, Saudi Arabia targeted Saudi dissidents including Omar Abdulaziz, Ghanem Al-Masarir and Yahya Assiri, in addition to staff members at Amnesty International.

Similarly, the UAE attempted to spy on Ahmed Mansour, an internationally recognised human rights defender. In 2016, an attempted hack of UAE activist Ahmed Mansoor’s phone was detected. This attempt was carried out with the help of an Israeli cyber security company.

In other words, the Israeli government is actively engaged in a tit for tat game with these Arab authoritarian regimes; where Tel Aviv helps Abu Dhabi, Riyadh or Manama to silence opposition in exchange for these regimes turning a blind eye to Israel’s brutal human rights violations in the occupied Palestinian territories.

An End to Business-as-Usual Politics?

By normalising relations with Arab authoritarian regimes, and nurturing ties with states like Saudi Arabia, Bahrain or the UAE, Israel is hoping to further distance the Arab world from democratisation. Nevertheless, the new generation of Palestinians are making this plan untenable.

This tech-savvy Palestinian generation have found new ways of resisting the occupation. Without waiting for the interventions of the Palestinian Authority or its media tools, young activists like Mohammad and Muna Al Kurd are spreading global awareness of the daily struggle of Palestinians in East Jerusalem. Muna Al Kurd’s video documenting an Israeli settler’s raid on their family property in Sheikh Jarrah went viral on social media. Overnight, ‘If I don’t steal your house, someone else will’ became one of the most popular hashtags spreading awareness on the harsh reality of living under brutal militarised occupation. Since exposing Israeli attempts to ethnically cleanse East Jerusalem of Palestinians, the twins have been arrested multiple times then shortly released by Israeli police.

Israel has not only been internationally exposed, but also challenged by the recent wave of unity among Palestinians. Currently, there are 7.6 million Arabs living in Israel, West Bank, and the Gaza Strip. Despite their fragmented political leadership, the latest events speak to the unity of Palestinians across historic Palestine who ‘have never been more united than today.’

On a global level, today, we are witnessing an unprecedented global solidarity with Palestinians. International organisations like the United Nations Economic and Social Commission for West Asia (ESCWA), Human Rights Watch (HRW) and the Carnegie Endowment are recognising Israel as an apartheid state. A recent report published by HRW described Israeli policies toward the Palestinians as ‘crimes against humanity of apartheid and persecution.’ Similarly, four years ago, the ESCWA – a UN agency – published a report concluding that ‘Israel has established an apartheid regime that dominates the Palestinian people as a whole’. In light of recent Israeli aggression, Ireland passed a motion condemning the ‘de facto annexation’ of Palestinian land by Israeli Authorities – a unprecedented move from a country within the European Union.

For an apartheid regime, Israel’s policy towards strengthening relations with regional authoritarian regimes is more than predictable. The left wing in Israel is weak; most influential political figures including former Prime Minister Netanyahu belong to the right. The current Prime Minister, Naftali Bennett, is an ultra-nationalist, who not only publicly admitted to ‘killing lots of Arabs’, but is also an outspoken advocate of Israel as ‘the Jewish nation state’ with religious claims to the West Bank and East Jerusalem. Clearly, internally, and within the Arab region, democracy and democratisation is Israel’s biggest fear. That said, Israel’s bargain on the support of authoritarian states in the region is failing miserably. Recent events have shown Israel reaching a point of no return, and it cannot continue its usual business of disregarding Palestinian demands for self-determination and freedom from the occupation.