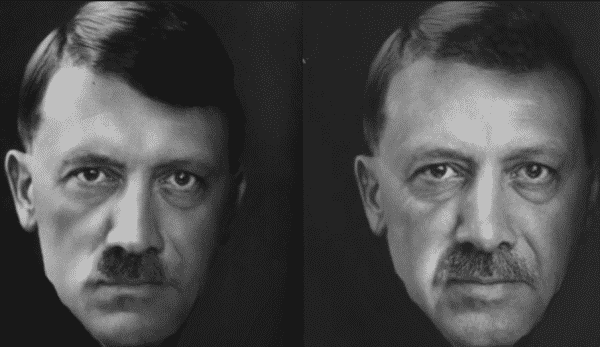 
“Turky Jerky” Recep Erdogan is at it again, finding yet another way to insult the Jewish people

Turkish President Recep Tayyip Erdogan on Monday sent a belligerent message to French President Emanuel Macron, who has voiced criticism against Islamism in his country, and said that Muslims in Europe are persecuted like the Jews before WWII.

Erdogan claimed that “there is a lynch campaign running against the Muslims which is similar to the one against Jews in Europe before World War II.”

But I’m surprised he said it. I thought he was a bit of a Hitler’s Germany fanboy.

Turkey’s president has been pushing for some time for a new presidential system to govern the country, sparring with critics who accuse him of attempting a power grab.

Recep Tayyip Erdoğan’s latest comments in favour of greater executive powers are unlikely to help him bring those critics round. On Friday he was quoted by Turkish media as citing a striking example of an effective presidential system – Germany under Adolf Hitler.

Asked on his return from a visit to Saudi Arabia whether an executive presidential system was possible while maintaining the unitary structure of the state, he said: “There are already examples in the world. You can see it when you look at Hitler’s Germany.