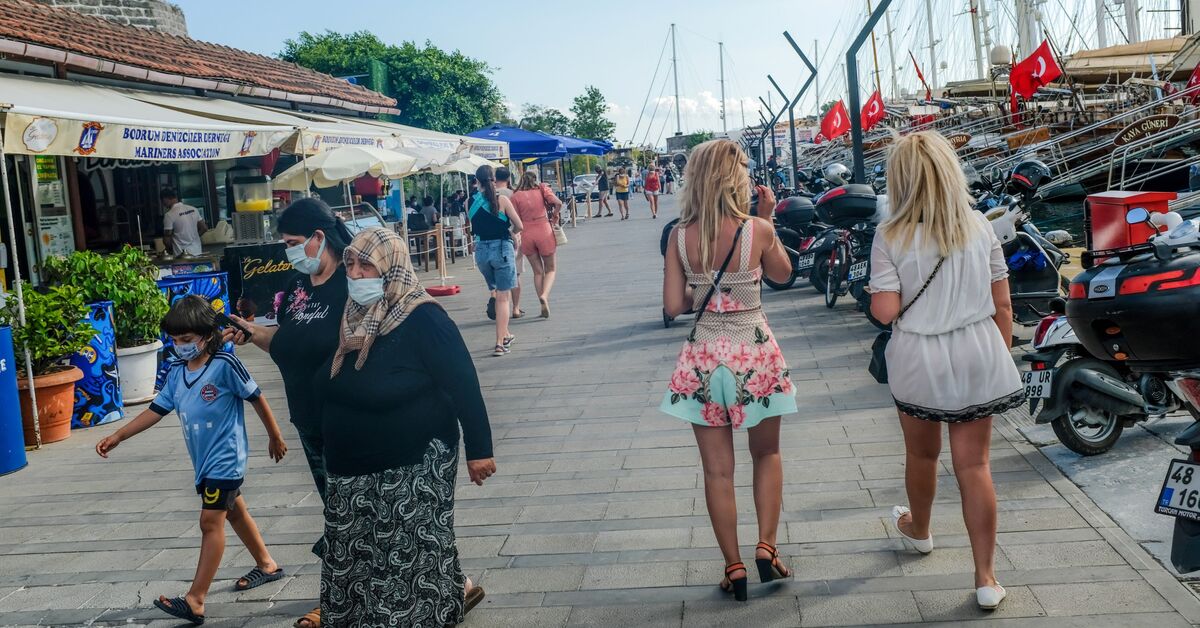 The July 21 figure of 8,151 was a drop from the previous day’s tally of 8,780 new cases, but still was nearly twice the number of new daily cases, 4,418, registered July 4. The rise comes amid concerns about the highly infectious Delta variant of the coronavirus. The number of Delta variant cases in Turkey more than doubled to approximately 750 from 284 in the space of a week, Health Minister Fahrettin Koca warned July 12.

Koca, a prolific tweeter who issues terse warnings through his account, which has 7.3 million followers, shared news of the surge July 20. “The Eid should not offer an opportunity for the virus to spread. We can both celebrate [Eid al-Adha or the Feast of Sacrifice] and remain vigilant,” he tweeted, urging holiday-makers to refrain from huge gatherings and get vaccinated while still on holidays, rather than wait.

In Van, vaccination units were set up in the courtyards of local mosques to administer doses to people who had come to the places of worship for Eid morning prayers.

Turkey started a mass vaccination campaign Jan. 14, first with Sinovac and then with Pfizer. The country has administered nearly 64 million doses, including third booster shots of the Pfister vaccine that are said to provide more protection against the more infectious Delta variant.

The Turkish Medical Association said it had repeatedly warned the government about the Delta variant for weeks but to no avail. “In efforts to boost tourism, Turkey has not only relaxed the anti-pandemic restrictions too quickly but also allowed tourists from the countries with a high percentage of Delta variant to enter Turkey without adequate medical controls and the requirement of a quarantine,” Dr. Sebnem Korur Fincanci said July 21 on Halk TV in reference to Russian tourists who have arrived in Antalya this summer. Antalya hosted approximately 307,000 Russian tourists in the last two weeks, according to official data.

She added that new coronavirus cases were around the “9,000-range” and that the government was “consistently downplaying the Delta variant figures, particularly in the southern provinces where there were foreign tourists.”

“We know from the ground that the Delta variant — as well as the number of overall cases — have shown a surge in Antalya,” Dr. Lutfi Camli, the Izmir Medical Association chair, told Al-Monitor. “Given the massive tourist movement in the coastal areas, we can expect a further surge of COVID-19 and variants after the Eid and a fourth wave as early as August, according to many academics.”

Turkey managed to lower new daily cases of COVID-19 from around 60,000 in April to around 4,000 in June through closing restaurants, shops and cafes, by imposing weekend curfews and by pursuing a mass-vaccination campaign, but Health Ministry officials fear the numbers may surge as a result of the holiday gatherings.

“Stay away from closed and crowded environments. … It is nice to be united but you do not want to leave the holidays infected with COVID-19,” Koca said July 19 as Turkey embarked on the Eid al-Adha holidays.

But most of the holidaymakers had already flocked to crowded sea resorts or left for their hometowns to celebrate Eid with their families by then, following President Recep Tayyip Erdogan’s announcement July 12 that Eid (July 20-24) would be bridged with the weekend before it. After a long, homebound winter and spring marked by curfews and restrictions, many people hit the roads for a change of air as early as July 15 (an official holiday commemorating the unsuccessful 2016 coup) to start an 11-day holiday that would also include Eid al-Adha and the weekends before and after it.

In the meantime, TV channels have shown images of crowded beaches and bars, saying most of the country’s popular coastal towns were now full.

“People think that now that the bans are no longer in place as of July 1 and that the vaccination campaign is going on, everything is back to normal. This is wrong,” Camli said. “Only 22% of the people of Turkey have had their second doses of the jab. This is a far cry from the 70-75% of the population that has received two doses, which is required to attain herd immunity. This action of favoring economics over public health and opening up everything in order not to miss out the tourism season will have harsh consequences, both immediately and medium-term.”

His concerns were shared by the medical chambers of other holiday cities. Cafer Sahin — the chair of the medical chamber of Mugla, the capital of the southwestern province of the same name where resorts such as Bodrum and Marmaris are located — said that while there was a high level of vaccination in his city, the presence there of tourists from all over Turkey risked bringing about an upsurge and/or the Delta variant.

The number of people in Bodrum — a popular holiday resort in southwest Anatolia known for its lively nightlife and being the site of the ancient Halikarnassus — reached 1 million, more than five times its usual 181,000. Cesme, a popular Aegean resort town attached to Izmir, also reached 1 million, more than 20 times its usual 46,000. The municipality sought to provide a distance of 2 meters (6 feet) between sunbathers by marking spaces off with ropes at its huge public beach. Some beachgoers, however, simply removed the dividers.

“Half a million cars have entered Cesme since the beginning of the week,” Mayor Ekrem Oran told journalists. “All accommodations in hotels and bed and breakfasts have been reserved and the locals, particularly the hospitality sector, are very happy.”

Oran, a native of Izmir who has spent most of his summers in Cesme since he was a child, said he had never seen the town so packed in 50 years.

“I have never seen Cesme as crowded as this,” Bahar Tolle, a Turco-German pharmacist who came to see her parents in Cesme, told Al-Monitor. “We pay a lot of attention as we go out, wearing masks and keeping away from crowds, but very few people do. So we go to the beach early in the morning and come back before it gets too crowded.”

Though the local tourists provide a balm for the ailing industry, the real remedy for the hospitality sector lies in getting back at least some of the foreign tourists. This, however, looks unlikely for the time being as the European Union has kept its restrictions on nonessential travel to Turkey due to the coronavirus pandemic.

The UK government also announced July 14 that it will keep Turkey on its “red list” for international travel, meaning travelers will be subject to a mandatory hotel quarantine for 10 days, which they will have to pay themselves, upon their return to the UK. The UK government reviews the traffic light system every three weeks and instructs people not to travel to “red” countries unless for extremely essential reasons.

The Turkish tourism sector had been hoping that the UK would remove Turkey from the red list following the mass vaccination campaign.

With tourism making up 3.8% of its gross domestic product and accounting for 7.7% of its employment, Turkey has struggled to woo tourists by developing a safe tourism certification program for its hotels and restaurants and prioritizing the vaccination of  members of the hospitality sector.

“I promise you, anyone who will ever see a tourist will be vaccinated,” Turkish Foreign Minister Mevlut Cavusoglu told his German counterpart Heiko Maas on May 6, raising the ire of many Turks. The Ministry of Tourism and Culture also came under fire after releasing a promotional video in English on social media where tourism workers were wearing masks that read, “Enjoy, I’m vaccinated.”

Re: 'Israel's attacks on Palestinians qualify as state terrorism'