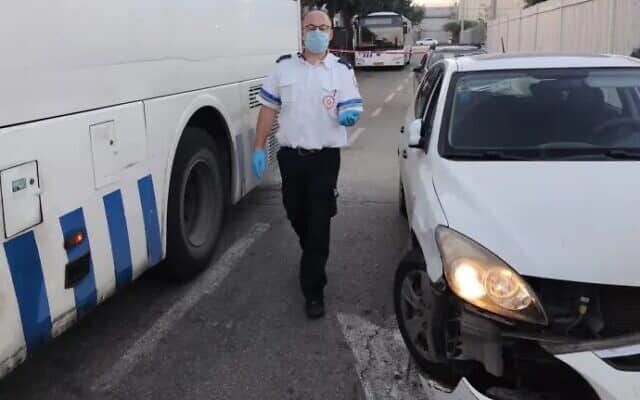 
Turkey’s Anadolu Agency has reported about the evil doings of an Israeli bus driver, who deliberately ran over a group of palestinian workers, killing two.

Two Palestinian workers were killed when an Israeli bus ran over a group of workers near Jerusalem on Wednesday, according to a Palestinian official.

Five other Palestinians were also injured in the incident that took place at the northern entrance to Bethlehem, Shaher Saad, the Secretary-General of the Palestinians Workers Union, told Anadolu Agency.

Saad held the Israeli authorities fully responsible for the incident by failing to “rehabilitate special garages to transport Palestinian workers to their work sites”.

Except it wasn’t an Israeli bus driver at all. As the Times of Israel reports:

In an apparent hit-and-run, a bus hit seven Palestinian workers Wednesday morning near a crossing between the West Bank city of Bethlehem and Israel, killing two of them.

The bus, which is also Palestinian and which had been empty of passengers, fled the scene, the Israel Police said in a statement.

(I assume the bus did not run away, and this is a case of the Times of Israel editor falling asleep at the wheel)

And for those of you who won’t trust an Israeli news outlet (Israel-haters, no doubt)

Note how this Arabic source claims the driver surrendered, while the Times of Israel quotes Israeli police as saying he ran away. Either way, they both confirm he was a palestinian Arab.

The palestinian WAFA News Agency manages to avoid mentioning the driver’s nationality, further proof he was palestinian; because they sure as hell would have mentioned it if he was Israeli!

They said that at least two Palestinian workers, aged 29 and 30, were killed and five others were injured when a packed passenger bus ran over them at the Israeli checkpoint, which separates the West Bank cities of Bethlehem and Jerusalem.

But don’t worry, they still try to blame the accident on Israel.

Thousands of Palestinian workers queue before dawn each day to pass through Checkpoint 300.

Workers crowd into the cement- and metal-barred walkways, push through turnstiles, pass a metal detector and show their IDs and permits to Israeli soldiers in order to travel to occupied East Jerusalem and Israel for work.

The checkpoint was reportedly built in 2005 inside the West Bank despite the International Criminal Court of Justice’s ruling that Israel’s wall was deemed illegal in 2004.

Either way, it is pretty clear Anadolu has disseminated a libel. Which may not be all that surprising given it is a Turkish state-run news outlet. And we all know just how much Recep Erdogan loves to demonize us.

Share
Facebook
Twitter
Pinterest
WhatsApp
Previous articleRe: The UN's Day of Solidarity for the Palestinians exposes its own impotence
Next articleRe: Palestine prof: Zionists had European, US backing, Palestinians didn't have that advantage
- Advertisement -

This article is part of the series on “COVID-19 in the...
Read more
Travel

In the conservative Qatari society of Ameera AlAji’s youth, where she says expressing emotions was discouraged or even condemned, she found a liberating...
Read more