Towards More Sustainable and Inclusive Tourism in Morocco? 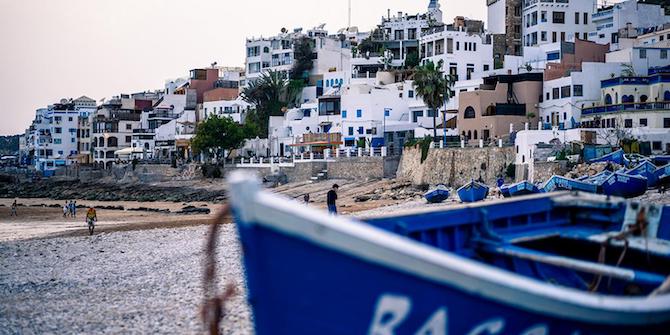 Tourism in Morocco and the Pandemic

Tourism represents 7 percent of Morocco’s GDP and has directly created 500,000 jobs. It generates considerable income: around 75 billion dirhams (6 million euros) in recent years. Moreover, it has indirectly contributed to the creation of approximately another two million jobs.

Whereas in 2019 the occupancy rate of all the country’s hotels reached 90 percent, in 2020, 70 percent of hotel establishments had to close. According to estimates of the National Confederation of Tourism, the losses due to the pandemic may amount to 33 billion dirhams (3 billion euros), with 500,000 jobs lost and 8,500 companies threatened.

Political leaders reacted quickly and, following the royal speech of July 2020 which called for the initiation of an ambitious economic recovery plan, they introduced and signed in August a contrat-programme covering the period 2020–22 based upon three goals: maintaining jobs, stimulating demand and enacting structural transformation of the sector. The signatories of this programme were the Ministries of the Economy, Tourism and Labour on the one hand and the National Confederation of Tourism and the Professional Grouping of Banks of Morocco on the other.

Ensuring the Transition from Mass Tourism to Sustainable Tourism?

The third objective (the structural transformation of the sector) may pave the way for a progressive orientation towards sustainable tourism, in which the need for a diversity of tourist zones would be emphasised and regulation implemented to avoid concentration on sites favoured by mass tourism. An article by Hassan Zaoual, published in 2007, already stressed the need to move from mass tourism to situated tourism; with Zaoual pointing out the need to ‘situate oneself in an uncertain world’ and speaking of the importance of cultural exchanges that ensure social and ecological sustainability.

Sustainable tourism was inspired by the Rio Declaration on the Environment (1992) and the concept was developed at the Lanzarote Conference (1995). It is based on objectives such as the preservation of natural resources and biodiversity of tourist sites (ensuring the long-term attraction of visitors), the conservation of cultural identities and heritage, and the improvement of living conditions of local populations as well as the participation of local stakeholders in economic activities resulting from tourism. The main challenge sustainable tourism aims to tackle is making a tourist activity prosper over the long term. Participatory management allows for the sustainability of socio-economic development while preserving the integrity of local communities.

Aziz Hmioui and Erick Leroux have written on the place of sustainable tourism in Morocco’s tourism development strategy: their piece dates from 2019, before the COVID pandemic, and is prescient in its prognosis. Hmioui and Leroux observe in particular the fact that the essential infrastructures are unequally distributed over the country’s territory: they essentially benefit Agadir and Marrakech, while many riches remain untapped, for lack of investors. Thus, Hmiou and Leroux offer a series of suggestions aimed in particular at the opening up of certain rural regions, such as encouraging Moroccans living abroad to invest in alternative tourism or supporting the creation of tourist micro-businesses, especially in marginalised rural areas.

In short, the orientation towards solidarity and eco-responsible tourism based on the development of traditionally marginalised areas seems a winning solution. In an article dating from 2015, Fatima Arib demonstrates the complexity of the financing of tourist projects in Morocco by underlining the fact that the government, seeking to avoid increasing its public debt, had taken recourse to local private funds. As Arib suggests, more participation of local stakeholders in all their diversity is essential to ensure the sustainability of tourism, especially in rural areas. Arib also notes that the concentration of tourist numbers leads to much greater impacts on fragile territories that are insufficiently diversified to absorb crises. The first socio-economic effects of the COVID pandemic appear to have confirmed her analysis.

In July 2020, during the quarantine period, a cooperation programme was signed between Switzerland and Morocco to promote sustainable tourism in the Beni Mellal – Khenifra region. Nadia Fettah Alaoui, the Minister of Tourism, Handicrafts, Transport and Economy then declared with lucidity: ‘We have not sufficiently involved the local populations and I think we must put all our energies to make this offer more accessible and shared with the populations for more social and territorial equity’. The Morocco-Switzerland programme is a five-year scheme, 90 percent financed by the Swiss State Secretariat for Economic Affairs (SECO) and based on an approach developed at the University of St. Gallen. The aim is to identify priority visitor flows to develop destinations. In addition, around 40 guest houses are to be rehabilitated and an offer of continuing education in tourism will be proposed through the ‘Tourism Academy’ platform.

However, sustainable tourism without participatory management cannot be truly sustainable. The strictly mercantile approach that has hitherto guided the sector must be abandoned in favour of a multi-partner approach whose effects must be measured through effective, ecologically sustainable and socially equitable economic development.

A New Region, or Independence? Basra’s Demands Amidst a Local Government Crisis