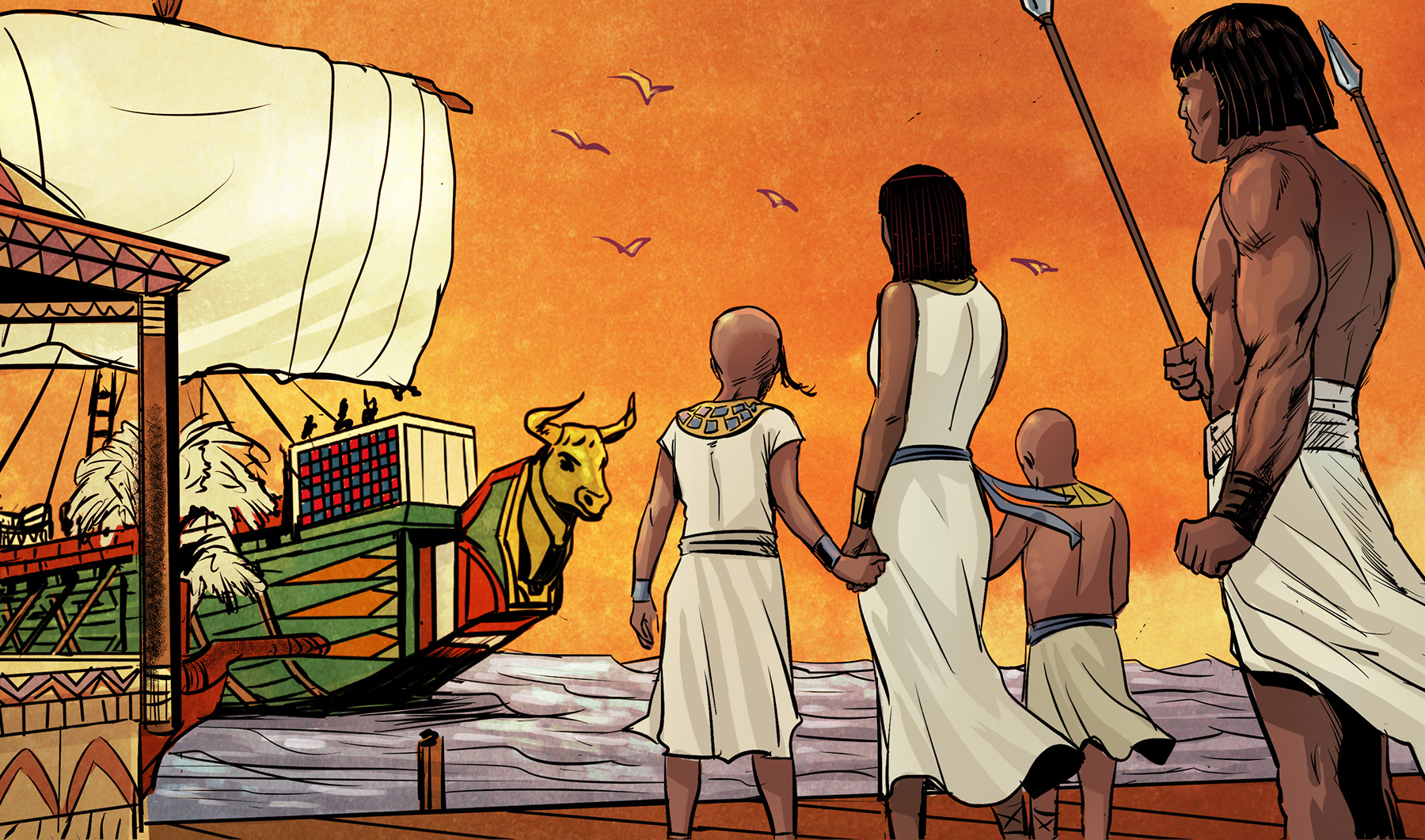 A royal cry to battle, the clinking clash of weapons, arrows flying into the sky, and a ship sloshing into the Nile as an Egyptian king leads his army – and so is a glimpse of Benjamin Slabak’s graphic novel featuring one of the most important historical and transitionary events of ancient Egypt.

Inspired by real events and characters in 16th century B.C , Ahmose: Book I is an ambitious 80-page graphic novel, the first in a two-volume series focusing on the Theban Dynasty’s perspective during the transition from the Second Intermediate Period to the New Kingdom, as Egypt grappled with the Levant-originating Hyksos who ruled much of Egypt.

The story follows two real characters, Ahmose, the son of King Seqenenre Taa II, and Ahmose, son of Ibana, a famed soldier whose autobiographical inscriptions provided Egyptologists with knowledge regarding the Hyksos conflict, as they take back control over the land.

Slabak, the Australian author, identifies himself as an IT professional by day, a writer by night, and a traveller. His works, ranging from science fiction to historical graphic novels, have been published in the US, Italy, France, Italy, and Japan.

He grew up with a deep fascination for Egypt during his childhood in former Yugoslavia, reading books on the topic and attending exhibits. It was only after acquiring a Bachelor of Science in adulthood that Slabak followed his passion for the field and did an MA in Egyptology at Macquarie University, Sydney, focusing on Egyptian textual records and language.

His passion, with a particular interest in the early New Kingdom, eventually took him to Egypt on excavations, where he did fieldwork in Luxor in Theban tombs, recording epigraphy and conservation of wall paintings, as well as translating wall inscriptions.

Slabak’s life circumstances postponed his decision to turn his topic of passion into a PhD thesis. Instead, he opted to transform the topic, which lacks much written evidence, into a graphic novel, replete with an exciting and historically accurate narrative, rather than an academic piece of work.

While the first volume of the series focuses on the background story, namely the king Ahmose’s upbringing and his father’s struggle with the Hyksos, the second volume focuses on the final push to expel the Hyksos from the country.

“This is presented from how the Thebes saw the Hyksos threat, and how they responded to it based on the evidence that we have from the Theban side,’’ Slabak asserts.

“They’re all quite passionate about Egyptian history; everyone went the extra mile to produce something really special,” Slabak explains.

The author, who studied Egyptology academically, is careful in the curation of the content, with a sharp eye for details and accuracy.

“The first volume took us 18 months [to produce], the artwork is very detailed so it’s quite time-consuming. To develop the characters and some of the scenery we needed time to set up and get the basics right, so, for example, the palace of Seqenenre – it’s a real palace north of Luxor. I was actually liaising with Peter Lacovara who was excavating the site at the time I was writing the scene, so he provided me with the schematics of the palace, the color scheme inside, how the columns looked, how the rooms were laid out, so we utilize as much evidence as we could.”

He is also quick to amend overlooked artistic inaccuracies, such as adorning the common Egyptian characters in Egyptian headscarves which were only worn by royal figures. Fortunately, the graphic novel was entirely drawn digitally, rendering it easier to edit.

Despite the positive and supportive reactions from many Egyptologists and scholars, Slabak confesses that the creative arts project – his most demanding book yet – also elicited little, expected criticism. Indeed, academics can be particular with artistic renditions of historical events as tends to be the case in films, series, and documentaries; they can also voice out concerns with ‘older scholarship’ used for referencing. Nonetheless, Slabak’s approach was straightforward: focused on the Theban perspective, and based on updated scholarship, with a collaboration with other Egyptologists.

Slabak’s current Kickstarter campaign, set to end in a few days, is a pivotal step forward to ensuring the two-volume book sees the light of day. It is essentially aimed at covering the printing run of the English edition of Volume I, which the author is publishing himself, and covering the production fees of Volume II.

Volume I, which took 18 months to materialize, is in the final ‘lettering’ stages of production and is set to immediately go into printing, in Europe, with the funds from the Kickstarter. Backers in Europe and in Australia will then be able to enjoy soft and hardcover copies of the book which they have helped support.

Volume II, which is still in the process of being written by Slabak, will go into production in a few months and is set to be released next year.

The soft-cover copies of Volume I and Volume II join to create a landscape scene, while for the hardcover version of Volume I, Slabak opted for a ‘coming-to-life’ scene of Ahmose emerging from his tomb inscription.

Backers, depending on the amount they are keen on providing, can enjoy various forms of the graphic novel as well as accompanying rewards such as original customized artwork by the artist, jigsaw puzzles, physical comics previously published by Slabak, or even an inscribed steatite scarab.

He hopes that readers, Egyptians and international, will be able to enjoy the book, with its high-level of detailing and artwork, and see it as a chance to deepen their knowledge about ancient Egypt.

“Most Egyptians have the monuments and the inscriptions, and it’s difficult to relate to these living people. This will bring a bit of color and personality to these monuments, statues and mummies, and bring this story to light so they can relate more [to the ancient Egyptians],” he explains, hoping that the narrative is both entertaining and educational concomitantly.

Although the original work is in English, Slabak has plans to expand the scope of the readership with potentially rendering the book available in Arabic.

“A Franco-Egyptian publisher approached me a couple of months back, and they were thrilled with the book,” he explained.

Most ambitiously, Slabak also hopes to see an extremely limited ‘papyrus-printed’ version of the book, in a few languages. He is also contemplating tackling the story of Ramses II in a future graphic novel.

Driven by his vision and the full knowledge that there is power in the visual, the Sydney-based author reiterates that the goal of this project is “to make history more accessible, particularly to younger readers,” drawing from his own experience of looking at graphic novels for a chance to deepen his historical knowledge.

Indeed, Egypt’s identity as a ‘hot-spot’ for ancient discoveries continues to attract the attention of ancient Egypt aficionados from all over the world. Its collections, museums and historical sites also persistently inspire children and adults to seek documentaries and films about their favorite characters and monuments.

In the last few years, and especially after the royal mummy parade which took place in Cairo in March whereby 22 royal mummies, including Seqenenre Taa, were permanently moved from the Cairo Museum to the National Museum of Egyptian Civilization, there has been a real demand for novels, and amateur books to quench a flared curiosity.

“Hopefully, the project can encourage someone to dig deeper, and even study it,” hopes Slabak.

To learn more about Slabak’s Kickstarter project and to support, click here.

Why Egypt is Moving to Plastic Money Photo via Facebook On Saturday, 31st of July, the spokesman of the Egyptian presidency announced that the Central...
Read more
Arts

As more Arab countries, especially the Gulf region, begin to open up and invest more in cultural arts, the center fosters collaborations between...
Read more
Arts

Navigating the Freelance Life in Egypt: Video and Filmmaking