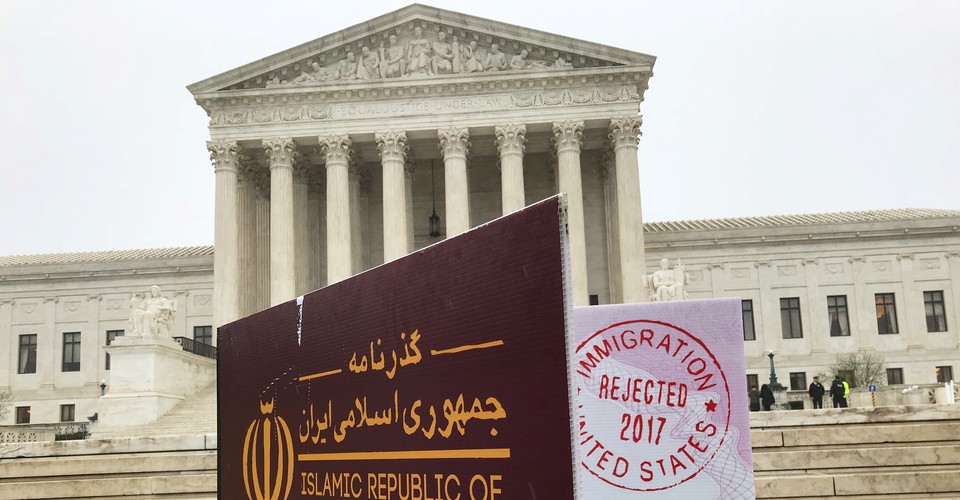 
Of course, the president’s directive is probably not neutral in intent. Trump and many of his senior aides bear an avowed animus toward Muslims or Islam, or both. Trump himself said during the 2016 campaign that he thinks “Islam hates us.” How much should intent matter? Constitutional law scholars—and of course the Supreme Court itself—are divided. In her dissent, Justice Sonia Sotomayor cited Trump’s rather long paper (or tweet) trail to argue that “taking all the relevant evidence together, a reasonable observer would conclude that the Proclamation was driven primarily by anti-Muslim animus.” But the extent to which certain motivations figure more than others is always difficult to divine. It’s also possible that someone’s intent changes over time, and it’s not necessarily the easiest task to discern what Trump’s “primary” versus “secondary” motivations might be on any specific matter.  What we do know is that the discriminatory nature of the text of the order itself is no longer self-evident, so what might have initially been an unequivocally discriminatory “Muslim ban” is now something else.

I am still deeply uncomfortable with the Supreme Court’s ruling. It contributes to the legitimization and mainstreaming of anti-Muslim bigotry. That’s certainly how it will be interpreted by millions of Americans. But that doesn’t mean the ruling itself, in narrow terms, rises to the level of one of the great moral questions of our time. The decision does not turn American Muslims like myself into “second-class citizens,” and to insist that it does will make it impossible for us to claim that we have actually become second-class citizens, if such a thing ever happens. To claim that Jim Crow or the Holocaust were similarly “legal” diminishes the moral seriousness of crimes that nearly all Americans, today, agree were unequivocally wrong. (No such consensus exists on Trump v. Hawaii and to assume that it will exist at some point in the future is to assume that morality will always necessarily be progressive and retroactive.) To use a less incendiary comparison, it is also difficult to argue that Trump v. Hawaii is comparable to the 1944 Korematsu v. U.S. decision permitting the internment of Japanese Americans. Nation-states generally have wide latitude in determining which non-citizens can enter their borders, where Korematsu targeted U.S. citizens.

Voters should be able to debate which entry and immigration policies are most appropriate, effective, and, yes, moral as it relates to non-citizens outside of our borders. To insist that such questions should be decided outside the confines of normal democratic deliberation undermines democratic responsiveness and accountability. This is particularly a risk at a time when immigration, rightly or wrongly, has become a top concern of voters in most Western democracies. To think that such questions can be resolved by dismissing or bypassing the views of your fellow citizens is a “long term recipe for public disillusionment and alienation,” writes Tablet’s Yair Rosenberg. The courts may be great places to bend the arc of history toward justice, but they’re only great places for that when they agree with whatever we already think is just.

As The New York Times notes, those who feel uncomfortable (or disgusted) with recent Supreme Court decisions must “look somewhere else. That place is the ballot box.” Moral judgments on constitutionally and legally muddy debates can be rendered, but they’re best rendered by persuading as many of our fellow citizens that they should stop voting for anti-Muslim presidents.

We want to hear what you think about this article. Submit a letter to the editor or write to [email protected]

Shadi Hamid is a contributing writer at The Atlantic, senior fellow at the Brookings Institution, and a founding editor of Wisdom of Crowds. He is the author of Islamic Exceptionalism: How the Struggle Over Islam Is Reshaping the World and Temptations of Power.

The Way Forward for Syrian Survivors of Sexual Violence