The geopolitics of space: Why did the UAE send a probe to Mars? 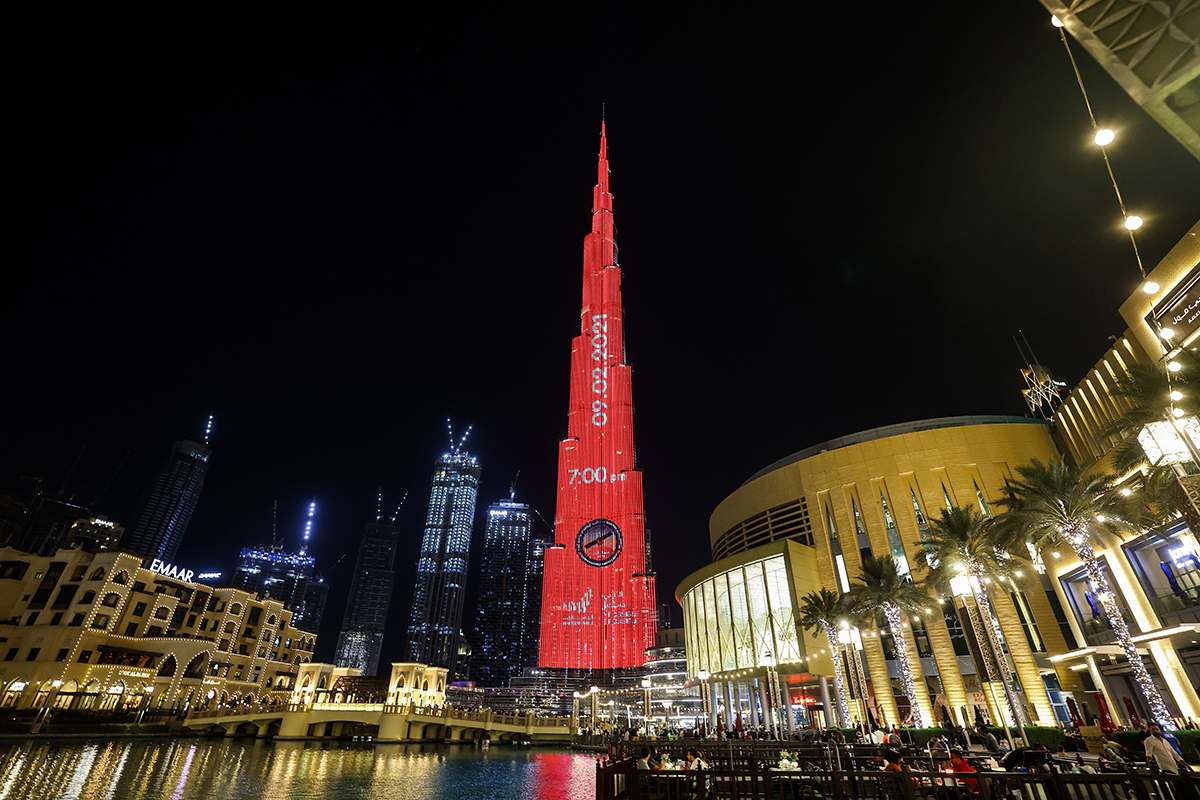 
On Feb. 9, 2021, the UAE made history when its Hope Probe reached Mars and communicated back to Earth. This made it just the sixth member of the elite group of countries that have reached the Red Planet, and the first Arab nation to do so. The UAE stressed that the Mars mission is a success for all Arabs and this significant scientific feat positions Abu Dhabi not just as a leader in the Middle East, but also as an important global player in space.

Space Race as a manifestation of the Cold War

In the mid-20th century, the Space Race between the U.S. and the Soviet Union epitomized the competition of the Cold War era. The two superpowers were competing across virtually every region of the world, from Africa to the Middle East to Southeast Asia — and even to the stars — in realms ranging from nuclear weapons to espionage. But the Space Race also stood out as an arena that combined national pride and state-of-the-art technology. When the Soviet Union successfully sent the Sputnik satellite into outer space in 1957, it was hailed as a scientific victory and a validation of the Soviet system that overshadowed the economic or political advantages that the U.S. might have had over the Soviet Union. The Sputnik moment required a U.S. response in space, which came in the form of the 1969 Apollo 11 mission, the first crewed mission to land on the Moon.

In the immediate aftermath of the downfall of the Soviet Union, space programs remained almost the exclusive preserve of Moscow and Washington. However, in the 2000s and 2010s, more nations joined the space-faring club, for both commercial and geopolitical reasons. Having a space program is both a matter of national pride and a theater with real strategic value, where nations such as the UAE strive to project their power, capabilities, and ultimately their hegemonic aspirations. Furthermore, outer space has also emerged as a new frontier for warfare, where many space powers like the United States, China, and Russia are actively testing new capabilities from hypersonic missiles to anti-satellite weapons — and emerging space powers like India, the U.K., and France are taking note.

The Hope Probe’s success makes the UAE only the second country to enter Mars’ orbit on its first attempt, after India. This underscores the talent, capabilities, and investment that the UAE has dedicated to the program. Missions to Mars are incredibly complex technical undertakings. They represent the peak of current space ambitions and successfully carrying them out is both a hard and soft power victory — an explicit demonstration of scientific and technological prowess.

The scientific achievements of the Emirates Mars Mission are as important as the geopolitics. The Hope Probe has three significant elements: the eXploration Imager, which will take photographs of the Martian atmosphere in three visible bands and three ultraviolet bands; the Mars Infrared Spectrometer, which will scan the Martian atmosphere to track water vapor and heat movement and gauge the distribution of dust particles and ice clouds; and the Mars Ultraviolet Spectrometer, which will measure changes in the Martian thermosphere and the atmosphere’s ultraviolet emissions. More than 200 Emirati engineers — 34% of them women — designed and built the Hope Probe at the University of Colorado’s Laboratory for Atmospheric and Space Physics and the Mohammed bin Rashid Space Center in Dubai.

Leading the Arab world into space

From the beginning of the Emirates Mars Mission, the UAE presented it as an Arab mission into space on social media with the hashtag #ArabsToMars and devoted extensive media coverage to it. Yousef al-Otaiba, the UAE’s ambassador to the U.S., called the Hope Probe “the Arab world’s version of President John F. Kennedy’s Moonshot.” The messaging here is very clear: Abu Dhabi is keen to highlight that the UAE is leading Arabs into space, an effort that stands in stark contrast to the dark realities currently facing many Arab nations, from civil wars to economic problems, occupation, and population displacement. By leading the Arab world into the future through developing new technology and taking to the stars, the UAE is presenting itself as the new standard bearer for Arab and Muslim civilizations.

Space race in the Middle East

The success of the Mars mission and the UAE’s efforts to present itself as the region’s technological leader have sent shockwaves across the Middle East, prompting other major powers to invest in their own space programs. Space has become yet another domain of competition in which Middle Eastern powers can project their strength and capabilities, and an arena in which nations vie to represent the region on the international stage.

Egypt has consolidated its scattered space efforts under the Egypt Space Agency, which is planning to send the first Egyptian astronaut into space by 2026. In 2019, Cairo launched its first communications satellite, Tiba-1, and will cooperate with spaceflight company SpaceX to send another communication satellite into space in 2022. Egypt is diversifying its space partnerships internationally, working with China and Germany on building two satellites. Having proven its commitment to enhancing its position as a player in space, Cairo was selected to host the headquarters of the African Union’s new space agency in 2019.

Turkey is another major player in the regional space race. In February, President Recep Tayyip Erdoğan —who is seeking a national achievement to coincide with the 100th anniversary of the Turkish republic, as well as an opportunity to consolidate his political power domestically — announced that Turkey plans to land on the moon by 2023. He added that the country aims to build “a spaceport with international cooperation” and compete in the field of next-generation satellite development. The most significant news about Turkey’s space ambitions so far is that Ankara plans to build a rocket launch site in Somalia that will cost upward of $1 billion. Turkey will also allocate $150 million to space research and development, as well as grants for astrophysics scholars.

Saudi Arabia is also taking notice of the region’s space race. Under the kingdom’s Vision 2030 plan to diversify its economy away from dependence on oil, Riyadh established the Saudi Space Commission (SSC) in 2018 to lead efforts on space industry and research. Saudi Arabia was the first Middle Eastern nation to send an astronaut into space, and it has pledged to invest $2.1 billion in its nascent space program. In 1985, in partnership with NASA, Prince Sultan bin Salman bin Abdulaziz al-Saud became the first Saudi, Arab, and Muslim astronaut, joining the Discovery mission, where he conducted experiments and helped launch the ARABSAT 1-B satellite. Prince Sultan bin Salman is the current chairman of the SSC and he plans to cooperate with space powers such as the U.S., Russia, China, India, and the UAE. For instance, this month, Riyadh signed an agreement with Beijing to conduct a Saudi scientific mission onboard the Chinese Space Station in 2022.

Iran is another regional power with space aspirations. Despite the impact of sanctions and constant tensions with both Western and regional powers, Tehran has maintained a robust space program since the 2000s. In 2020, Tehran successfully placed a military satellite named Noor into orbit, marking a shift in its space strategy to conducting satellite launches through the military instead of the civilian space agency, following failures in previous launches. Iran has had its own space agency since 2004 and succeeded in sending a Russian-made satellite into orbit in 2005. Under international pressure, Russia has reduced its space cooperation with Iran in the years since, and as a result, Tehran has looked to China as a space partner to launch a national remote sensing satellite and a national communications satellite. Should Beijing refuse to build these satellites for Iran over fears of U.S. sanctions, Tehran hopes to use Chinese space expertise and technologies to help it do so domestically instead.

Space is emerging as a new field of competition between Middle Eastern powers, and that rivalry has been given a big boost by the Emirates Mars Mission. A scientific and geostrategic success for the UAE, the mission has enabled the country to present itself as a leader among Arab nations in a new domain. Its symbolism has also had a broader regional effect as well, prompting Egypt, Turkey, Saudi Arabia, and Iran to try to follow suit and join the UAE in exerting their power in space as a reflection of their strategic positioning in the region.

Mohammed Soliman is a non-resident scholar with MEI’s Cyber Program. His work focuses on the intersection of technology, geopolitics, and business in the MENA region. The views expressed in this article are his own.

The Autonomous Territorial Unit of Gagauzia: A new focal point for Russo-Turkish competition?