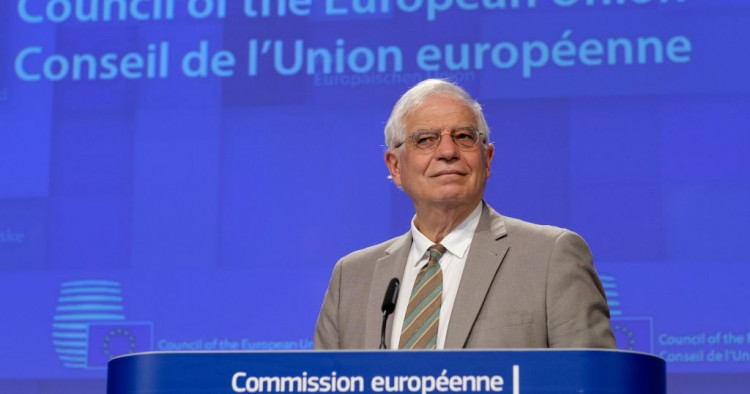 
More than a year and a half has passed since the last European Parliament elections, which ushered in new leadership of the bloc’s executive bodies, including the EU’s high representative for foreign affairs and security policy. Josep Borrell Fontelles, former Spanish minister of foreign affairs, officially assumed the role on Dec. 1, 2019, and during his first year in office his focus in the Middle East and North Africa (MENA) region was primarily on four main issues: the Israeli-Palestinian conflict, the ongoing civil wars in Syria and Yemen, Iran’s nuclear program, and the threat of another migration crisis. This article, the first in a four-part series exploring these key issues in EU-MENA relations, is devoted to the Israeli-Palestinian conflict.

The global COVID-19 pandemic has served as a major test of countries’ foreign policy priorities and the potential to act in the international arena. It severely curtailed opportunities for trade, investment, and economic cooperation, yet the pandemic has not resulted in a shift in the political priorities of major global powers in relation to most international disputes and conflicts. But did this hold true in the case of the EU and its attitude toward the Israeli-Palestinian conflict? Has the bloc’s position and approach changed or not?

With regard to the settlement of the Israeli-Palestinian conflict, the EU’s high representative for foreign affairs and security policy declared at the end of 2019 that the EU would maintain its position on the issue: It would continue to support the peace process, which should ultimately lead to a two-state solution. During his first year in office, Borrell held to that pledge. On Jan. 28, 2020, he responded to the release of U.S. President Donald Trump’s peace plan on behalf of the entire EU, declaring in an official statement, “The European Union will study and assess the proposals put forward. This will be done on the basis of the EU’s established position and its firm and united commitment to a negotiated and viable two-state solution that takes into account the legitimate aspirations of both the Palestinians and the Israelis.” However, a few days later he was more blunt and critical of the Trump plan, stating, “The U.S. initiative, as presented on 28 January, departs from these internationally agreed parameters. … The EU does not recognize Israel’s sovereignty over the territories occupied since 1967. Steps towards annexation, if implemented, could not pass unchallenged.”

While the divergence in U.S. and EU positions on particular aspects of the Israeli-Palestinian conflict was nothing unusual, the sharp and critical tone of Borrell’s speech, coming from the EU’s diplomatic head, was something new. The EU was not and still is not ready to adopt any solutions that are not the result of a process of negotiation between Israelis and Palestinians. At the same time, the EU has consistently rejected the Trump administration’s fait accompli politics, such as relocating the U.S. embassy to Jerusalem and giving Israelis a free hand to develop settlements in the occupied territories.

On the issue of the Abraham Accords, Borrell welcomed the normalization of relations between Israel and the UAE, Bahrain, and Sudan in autumn 2020. At the same time, however, he clearly emphasized in the European Parliament that the mere normalization of Israel’s relations with Arab states would not resolve the Israeli-Palestinian conflict, stating, “This was a positive step and we celebrated and welcomed it, but the agreements themselves do not address the Israeli-Palestinian conflict. And the Israeli annexation plans still need to be abandoned, not suspended temporarily. Abandoned altogether.”

This clearly demonstrates that the EU will not reduce its expectations of the Israeli authorities when it comes to respecting their provisional obligations and improving the living conditions and security of Palestinians. That said, this does not mean that the EU supports the Palestinians uncritically at the expense of Israel either. In November 2020, Borrell called Palestinian Foreign Minister Riyad al-Maliki and during their conversation he highlighted the need for “re-engaging in a meaningful political dialogue.” The EU expects both sides of the conflict to fully and sincerely commit themselves to the peace process.

Thus, in his first year in office, the actions of the new EU high representative for foreign affairs and security policy can be considered to be broadly in line with the Union’s declared goals on the Israeli-Palestinian conflict. So far, Borrell has been consistent and there have been few surprises. In 2020, he had the opportunity to underline the official position of the EU on the Israeli-Palestinian conflict several times — and he took advantage of them. The EU’s position is clear and this is certainly valuable information for the new U.S. administration. President Joe Biden knows what to expect from America’s European partners and where there are divergent interests between the parties with regard to the means and goals of resolving the Israeli-Palestinian conflict.

Przemysław Osiewicz is a non-resident scholar at MEI and an associate professor at Adam Mickiewicz University in Poznan, Poland, specializing in EU policy towards the MENA region, Iran, and Turkey. The views expressed in this article are his own.