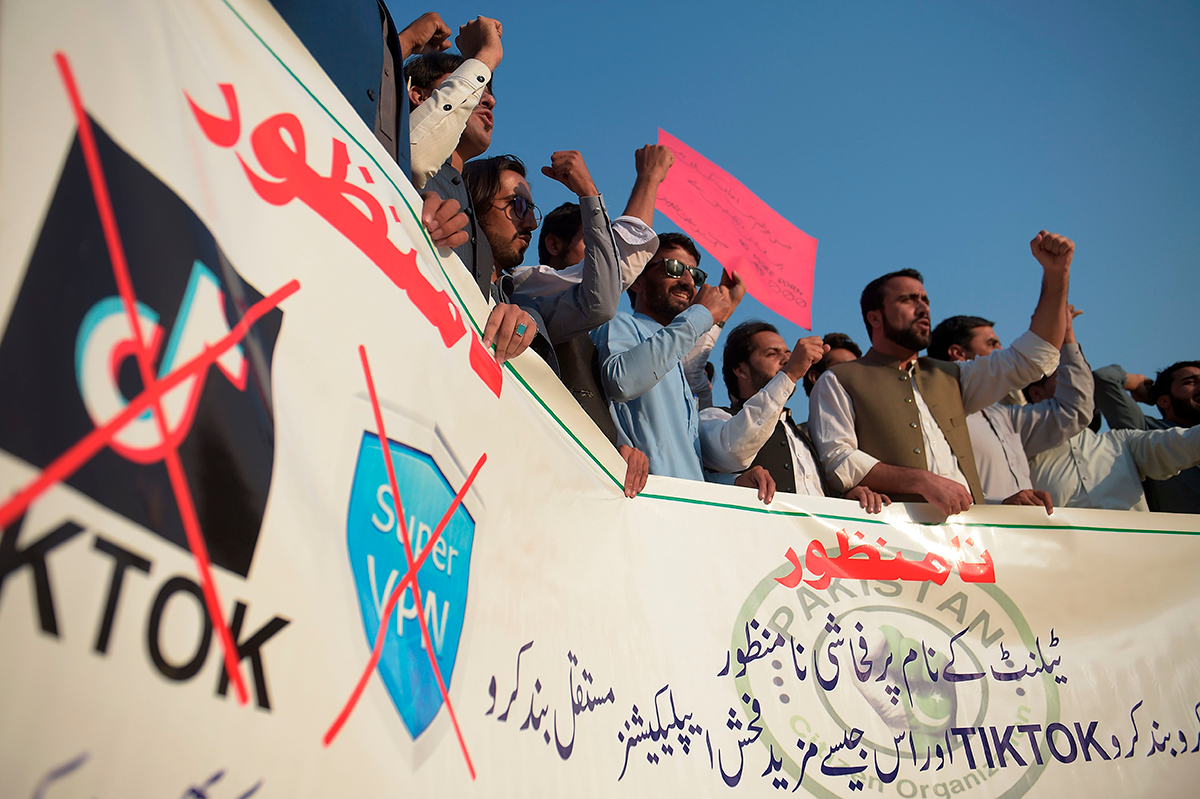 
When headlines flashed this month about the Peshawar High Court’s decision in Pakistan to yet again ban the controversial video-sharing app TikTok, you might have been tempted to scroll away in boredom. After all, who hasn’t banned TikTok these days? From Indonesia’s early ban to India’s decision to ban the app in the wake of tensions at the border with China — and reportedly destroy the livelihoods of content producers in the process — to the recent embarrassing attempt to police the app under former President Donald Trump, everyone has it out for TikTok these days. Teenagers are in turn radicalized, or politically awoken, on the TikTok. Your niece who you see every few months has almost 200,000 followers and does and says things on there that you barely understand. People riff on increasingly weird and dangerous conspiracy theories, draw attention to human rights atrocities, and push awkward boundaries between entertainment and reality on TikTok. And above all, everyone is always dancing, spinning their bodies into new shapes that seem to imagine a graceful and synchronized future, one in which we might all finally dance as one.

The local and the global

For Middle East observers in particular, Pakistan’s decision to ban the app — a decision which comes after a previous ban in October 2020, when the Pakistan Telecommunication Authority (PTA), in a fairly predictable framing, slammed the app’s “immoral” and “indecent” content, and later restored access 10 days later — might not seem like a unique case. Some might draw attention to the long established atmosphere of internet and media censorship in the region, a trend which has only continued to develop in the wake of the outbreak of the COVID-19 pandemic in 2020. However, such sweeping comparisons have limited usefulness, and the Pakistan case presents particular elements for further consideration. TikTok, like many social media platforms, tends to excel at bringing out the contradictory seeming combination of both hyper-localized and hyper-globalized content, collapsing the boundary between specific local context and global popular culture while providing a template for specific forms of political speech (even if that speech happens to take the form of dancing). TikTok, which evolved from and was merged with the lip-syncing app Music.ly, was initially designed around the activity of literally recording yourself singing along with someone else’s words or content, and even now, a good chunk of its native content is re-recordings or re-mixings of previously existing “challenges,” or responses to pre-existing templates. This particular internet monoculture — the fast cuts, the urge to comment broadly on “what it’s like when…,” the arm-swinging bounce and bright-eyed stance of dance challenges — will be very familiar to anyone who’s happened to access the internet anywhere in the world in the past five years or so.

But, of course, Pakistan’s local TikTok scene, like many in semi-authoritarian states, tended to inconveniently reflect the lived reality of those who used it, including recent content that deftly mocked the authoritarian-style prime minister Imran Khan, drew attention to social inequalities, or offered critiques or messages about the role of Islam or LGBT people in Pakistan’s political and social culture. And here, of course, is where things tend to get dicey. Because as social media platforms, or the proliferation of information and communication technologies in general, allow for more types of people to authentically document and express their lived reality, even that very act of documentation is an increasing threat to political regimes intent on smoothing out those differences. And when that expression is mixed in with entertainment and social performance, as well as being distributed and policed almost exclusively on private platforms with their own agendas and interests, this grows ever more complicated.

In a world where internet freedom is, for all intents and purposes, essentially synonymous with press freedom, Pakistan’s TikTok ban follows an established history of media suppression, surveillance, and censorship in the country, including recent violent crackdowns on journalists themselves. The banning of TikTok also comes in the wake of the government’s increasingly consolidated pivot to conservatively interpreted Islam as a central thesis to governance in the country, as well as recent crackdowns on student activists calling for improved policies in response to sexual assault on campuses and the end of privatization of educational institutions, among other demands. Pakistan was also unique in its attempt to ban YouTube and Facebook in the early 2010s, citing concerns of blasphemy and inappropriate content, a kind of ban which would now probably be deemed impossible, or at least difficult to imagine, as those platforms have eaten up more and more of our shared political and civil infrastructure. The country also boasts a well-established internet censorship apparatus that scrubs much of the Pakistani internet of any “objectionable” content before anyone can even access it (of course, this doesn’t even take into account the fact that the country also experiences a significant internet access gap, making safe and regular internet access even more difficult and rare for users living in rural regions or hailing from vulnerable groups). But, as it is said, information wants to be free, and it’s difficult for even the most authoritarian regimes to make, let alone enforce, rules about an ever-changing digital sphere.

So ultimately, the case of Pakistan’s TikTok ban says much about an ongoing reframing of the way governments in the Middle East police or protect free speech, as well as conceive of their own power. In particular, one common pattern is that authoritarian-style governments are increasingly likely to co-opt mechanisms of expression online into tools of government control, including through designated internet surveillance offices or influence operations, as in the earlier stage, or more recently, in the form of collusion or cooperation with the tech platforms that make such speech possible to begin with. Like Indonesia and Turkey, Pakistan recently introduced stringent new guidelines around the government’s ability to police and remove speech on social media platforms, with an accompanying understanding that an in-country office would be responsible for working with platforms to operate in the country only on the premise that government representatives had free rein to delete and censor content they deemed objectionable. The rules, in a turn slightly similar to the controversial laws put into action in Turkey in July 2020, also require that platforms respond to government requests to take down specified content or posts within six to 24 hours, or face enormous fines as penalties. This essentially turns the power of policing and defining free speech in a delicate game of catch between governments, which are increasingly treating the policing and management of speech as a matter of state building, and the enormously powerful and wealthy tech platforms themselves, which are ultimately, of course, private companies with the primary driving imperative to increase the reach of their product.

Much has been made of the looming specter of so-called internet balkanization (or the awkwardly dubbed “splinternet”), a conceivable reality in which countries partition off individual versions of internet access according to national censorship or control guidelines. What this leaves out is that, for many, internet balkanization is now or has already been the norm, particularly for people for whom safe, quality, and effective internet access has long been an unaffordable or unthinkable luxury (a condition that has only grown more worrying in the midst of the COVID-19 pandemic, which further exacerbated the global digital divide). And indeed, the “balkanization” framing also tends to shift attention toward state actors and away from the entities involved with, arguably, the most power to shape this ongoing transition: the technology companies themselves, as well as their financial partners. TikTok’s Chinese ownership, as well as its mysterious and opaque A.I.-inflected content streams, have prompted concerns about its potentially problematic data capture and management systems and its broader impact on the global tech market. Perhaps more concerning is the fact that TikTok, in a pattern similar to Google and Facebook before it, has been remarkably accommodating to governments’ takedown requests as a matter of unofficial policy, quietly removing, among other videos, posts on the platform that contained LGBT people or references, as well as content including plus size people, trans people, disabled people, and some content uploaded by female users, particularly in the Middle East and South Asia. Explanations for these removals are rare, vague, or both, but it seems rational to assume that many countries’ so-called “indecency” or “cybersecurity” laws, which use sweeping language to condemn content online deemed controversial, unacceptable, or unsuited for local consumption, are a helpful cover for collusion between TikTok’s aims at higher penetration in developing markets and those countries’ information control regimes.

Pakistan’s internet market is an example of the future of social media proliferation in the region: fast growing, quickly moving from rural to urban, intensely stratified by class and access, and generally not covered as closely or given as much attention as its more tech-ascendant neighbors, but where stewing unrest, calls for reform, and inequality mean that the quickening cycle of rebellion to repression online should be watched closely. Teenagers and young adults in the Middle East of 2009 tweeted and used Facebook to share opinions and information; the teenagers and young adults of 2021 are disguising political screeds in dance challenges and editing taboo topics into content that otherwise passes, at least to those of a certain age, as simply inane entertainment. But the line between entertainment, branded content, social networking, and genuine political speech is thinner than ever, and may not exist at all in a TikTok world, and this is a reality for which governments — particularly those of the non-democratic variety — are ill-prepared, at least for now.

Eliza Campbell is the Associate Director for Impact and Innovation at MEI’s Policy Center and a fellow with the MEI Cyber Program. The views expressed in this piece are her own.