Syrian refugees in Jordan use donkey-drawn carts amid lockdown 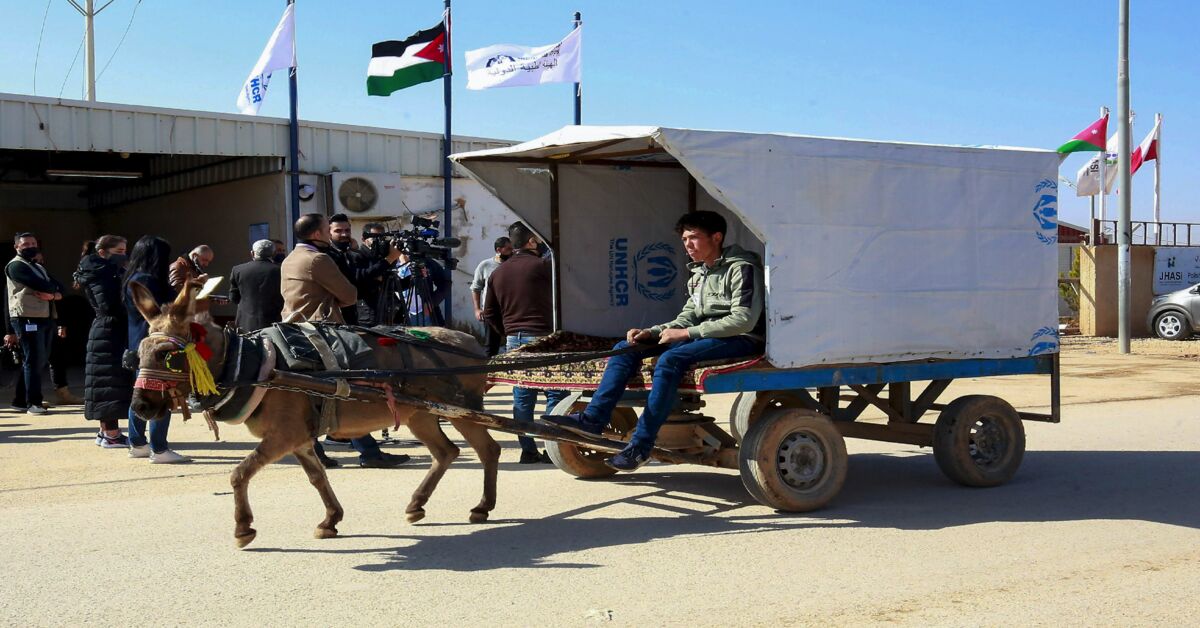 
AMMAN, Jordan — With the Zaatari Syrian refugee camp being isolated for more than a year as part of Jordan’s preventive measures against COVID-19, its residents have resorted to using antiquated traditional means of transportation.

The Zaatari camp in northern Jordan is home to 79,305 Syrian refugees, according to data from the UNHCR issued on May 31. Jordanian authorities have prevented cars from entering and leaving the camp since March 2020, so refugees have been using special buses with permits to travel within the camp.

In the 5.3-square-kilometer refugee camp east of the city of Mafraq in northeastern Jordan, the tanbar, which is a donkey-drawn cart that was prevalent in Syria in the last century, became the most common means of transportation.

After the camp was put under lockdown, Saeed Abu Khashrif, 50, thought he would bring back the tanbar to transport his tools. “I work as a blacksmith. At first, I made a hand-pull cart to transport materials when working outside the workshop, but then I thought that if I built a hantour (another type of animal-drawn cart) it would be easier to use, especially for women, so I added seats and curtains,” he told Al-Monitor.

Abu Khashrif has lived in the Zaatari camp since he fled the Syrian border province of Daraa to Jordan in 2013. He began working as a blacksmith after he was a carpenter in Syria.

“I built the first tanbar in the camp, but the industry later picked up. We now have over 500 tanbars and hantours in the camp and more job opportunities,” he said.

The tanbar was one of the most prominent means of transportation in Syria in the last century, and it continued to be used in tourist areas, especially in the governorates of Damascus and Aleppo.

“I was hesitant to ride the hantour and I sometimes would walk to the market, but eventually I started taking the hantour because I could no longer walk long distances and carry everything, and I have no one to help me since my children and my husband are often at work,” Huda Hariri, 45, from Daraa, who has lived in the camp since 2012, told Al-Monitor.

“Using the hantour and tanbar in the camp has become a normal thing after cars were prevented from entering once the camp was isolated. It is less expensive; [it is] comfortable and meets the purpose,” she said.

Hariri noted, “A while ago my daughter got married, and when we were preparing for the wedding, a hantour owner would come to take us to the market, even to the beauty salon. We moved all of our daughter’s belongings and household equipment on a tanbar.”

Demand for the hantour and tanbar has increased as the camp remains isolated. Mohammed Abu Ali, a hantour owner in his 30s who has been living in the camp with his wife and children since 2013, told Al-Monitor, “People have become dependent on the hantour to move around the camp, especially women and the elderly. We transport people to the market, to hospitals and vice versa, in addition to family visits among the camp residents. Its use has become essential as the main means of transportation in the camp.”

The tanbar and hantour have created job opportunities inside the camp for many residents, including Abu Ali, who drives a hantour. “I first bought a tanbar, then I turned it into a hantour because the demand for hantour rides is larger and I can charge more,” he told Al-Monitor.

“The price of a hantour trip depends on the distance; there is no fixed price. I make around $10 to $12 per day,” Abu Ali noted. Each tanbar and hantour is different. The owners decorate and customize them as they please.

He said he was working in farms outside the camp before the pandemic but ended up buying a tanbar once the camp was isolated. “Instead of spending my savings, I thought I would do something to sustain myself and my family.”

Abu Ali said, “A blacksmith built the tanbar for me. It cost me around $600 with the donkey. I then painted it, hung curtains up and built seats [to turn into a hantour]. I keep it nice and clean so people would want to ride with me. Many people call me to pick them up from their houses. I have regular clients now.”

Cairo MeetCutes: Spots in Cairo Where Love Blossomed Cairo couple. Photo courtesy of stttijn via Flickr. Paris may be the city of love but Cairo...
Read more
Travel

اقرأ باللغة العربية  From the beginning of the Syrian uprising in May...
Read more

Re: 64 Palestinians injured after Israel fired at worshippers at Al-Aqsa Mosque