Slate Inciting Against Jews With Antisemitic Article…Written by a Jew 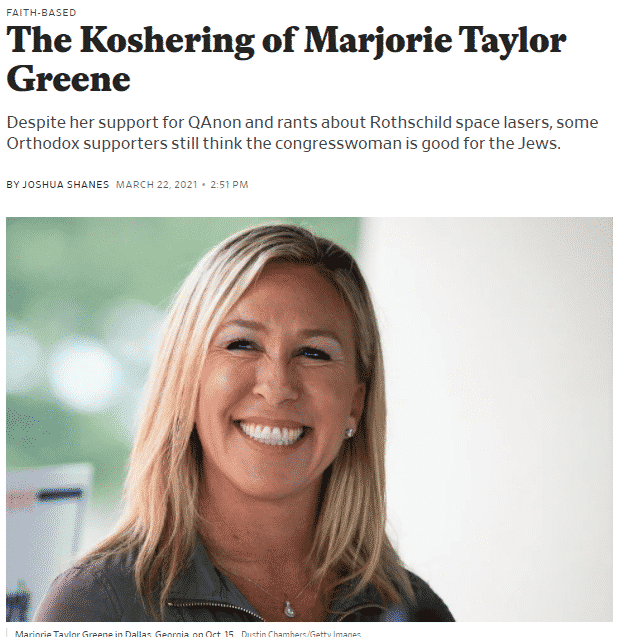 
Slate magazine is a “progressive” online magazine with a generally liberal editorial stance. In their infinite wisdom, they have published this piece:

It is about a couple of MAGA-supporting Orthodox Jews who led Marjorie Taylor Greene – of ‘Rothschild space laser’ infamy – on a tour of Orthodox Jewish sites in Brooklyn and the Five Towns.

The article describes her history of antisemitic comments – even beyond the space lasers – and goes on:

And yet this pair of Orthodox activists—and the magazine promoting them—insisted that she was an ally. “Knowing the congresswoman for a bit now, she has been nothing but a friend and ally for our community,” said Mostofsky in an interview last week. The tour, they insisted, was designed to educate her about Jews and Judaism. Their conservative colleagues at the “Coalition for Jewish Values” joined them in praise of Greene, as well as Rep. Mary Miller, who quoted Hitler approvingly at her Jan. 6 insurrection speech.

Why are these Orthodox Jews attempting to rehabilitate Marjorie Taylor Greene?

The main answer is the Orthodox community’s dramatic swing toward Donald Trump and the American right in sharp contrast to non-Orthodox Jews. Whereas the latter voted overwhelmingly Democratic in 2020, the Orthodox voted for Trump in numbers ranging from about 50 percent of the “modern” Orthodox to 90 percent or more of the “ultra” Orthodox, particularly in New York neighborhoods like Borough Park, New Square, and Monsey. As Mostofsky explained, “From government interference, education, religious freedom, we share what is commonly called Judeo-Christian values.” Chovevei Zion was clear about the nature of these values in a video they produced for last year’s CPAC conference. In their view, the values that Judaism bequeathed to the West include nationalism, unfettered capitalism, and property rights. They share the Christian right’s strict opposition to abortion and support for gun rights, and even joined mass protests against COVID-19 restrictions, which the ultra-Orthodox were widely covered flouting. They also share a long animosity toward the left, including (and sometimes especially) the left-wing and liberal Jewish majority.

But the impulse to defend figures like Greene also has far deeper roots in Europe. There is a long history of Orthodox political organizations—from Imperial Germany to Galicia to czarist Russia to Interwar Poland (and now to Trump and his ilk)—allying with conservative, authoritarian, and even fascist leaders against “the left,” throwing most Jews under the bus in the process. In late 19th-century Germany, for example, precisely when political anti-Semitism emerged as a serious threat, the German Orthodox became a fundamentally conservative political force. They eventually threw their weight behind the Catholic Zentrum party (the Christian conservatives of that time) even as it openly embraced anti-Semitism and pushed anti-Semitic candidates. Meanwhile, the Orthodox press there branded the social democrats “traitors to the country” and wrote that the Jewish socialists were not Jews.

In late 19th-century Austrian Galicia (today Western Ukraine), the Orthodox Machsike Hadas (“Upholders of the Faith”) allied itself with Polish conservative elites against liberals, social democrats, and the Ukrainian nationalists. A generation later, Orthodox Jewish leaders in Russia attempted to reach a rapprochement with the czar at the height of his anti-Semitic repression, expressing shared animosity toward leftist Jews in the hopes of winning political concessions. The Polish branch of the Orthodox party Agudath Israel (“the Aguda”) backed the conservative, business-friendly Piłsudski regime after his overthrow of Poland’s democratically elected government in 1926. Even in Nazi Germany, the Aguda joined the Free Association for the Interests of Orthodox Jewry to write Hitler himself in October 1933, declaring their loyalty to his regime and their shared hatred of Marxist materialism and communist atheism, including a denunciation of leftist Jews.

Moskowitz and Mostofsky claim to want to “educate” Marjorie Taylor Greene, but actually they just want her to understand that they are on her side. They agree with her racism, her support for violent insurrection, and her conspiracy theories about minorities, none of which warranted any comment. They are the good Jews, they want to tell her. Hence their emphasis on giving her a tour of “authentic” Judaism, and hence Turx’s insistence that the Rothschilds had left the fold by virtue of their intermarriages.

This is certainly not a universal position among Orthodox Jews, most of whom maintain the view that modern Jews exist in a hierarchy of authenticity, with the “deviance” of non-Orthodox behavior excused as stemming from ignorance rather than heresy. Nevertheless, there is a long history of Orthodox Jewish organizations and leaders taking a far more antagonistic view toward non-Orthodox Jews, especially on the left. This antagonism toward progressive Jews is now reasserting itself due to Orthodoxy becoming redefined by ethnonationalism.

There is a straight line from the Aguda writing Hitler in October 1933 that they shared his nationalist mission and his hatred of “Marxist materialism,” emphasizing that it had nothing to do with the “true, historical Judaism,” to Mostofsky calling Greene an ally and friend of “authentic” Jews who shared the same goals as her. In a sense, today’s outreach is far worse. The German Aguda threw other Jews under the bus in a desperate attempt to save themselves under conditions of unprecedented persecution.

Yup. The author has taken the actions of a few Orthodox Jews and managed to cast blame on Orthodox Jews throughout modern history, even managing to mention an alliance of sorts with Hitler.

Since this horrendous article was first published 3 days ago, Slate has put it on blast on social media, tweeting it out 8 times so far.

Slate very much don’t want anyone to miss this antisemitic article – at this time of rising hostility towards Jews. If that isn’t at best reckless, I don’t know what is.

And here’s what makes this even worse. The author, Joshua Shanes, is himself Jewish.

A bit of research on him reveals that he used to live as a Chabadnik (Lubavitch), but left the community due to some gripes with them. Perhaps this colored his views on some Orthodox Jews (or perhaps it was his views that led to his issues with the movement). These views include a left-wing approach to Israel.

What’s more, he still seems to live as an Orthodox Jew.

Now let me be clear: I don’t believe Shanes meant for his article to be antisemitic, and he likely does not think it is. He did, after all, opine recently that:

“‘Saturday Night Live’ made a joke about Israel discriminating against non-Jews and U.S. Jewish groups accused it of bloodcurdling antisemitism. It wasn’t antisemitic at all.”

But the net result of it can only be to inflame against not just Orthodox Jews but all Jews – especially with Slate devoting so much energy into ensuring it gets read by as many people as possible. Many of their readers won’t really even know the distinction, and will already have skewed, hostile views towards Jews.

Besides the antisemitism, this piece also demonstrates a double standard that exists when it comes to those espousing antisemitic views. When members of the Jewish community reached out to Nick Cannon after his remarks, I do not recall members of the Left decrying them, or suggesting Cannon was beyond repentance.

Which once again shows that the Left politicizes antisemitism, which is ironically what they accuse the Right of doing. Just like Joshua Shanes here accuses some Orthodox Jews of throwing other Jews under the bus – which is exactly what he did here.

Egypt should go green by putting a price on carbon