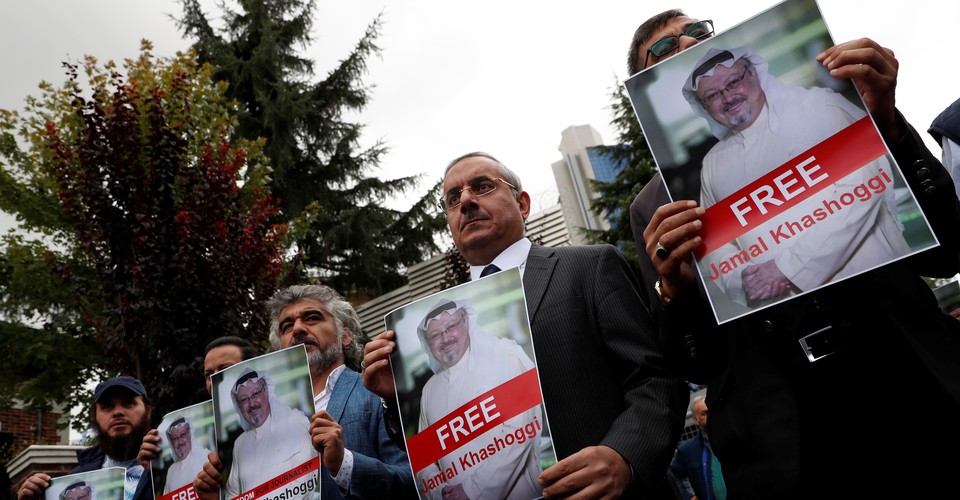 
What is both striking and telling is how halfhearted and generally uninterested the Saudis have been in countering evidence that they assassinated Khashoggi. (Take, for example, the Saudi ambassador’s suggestion to Senator Bob Corker that the consulate surveillance video only “live-streams.”) But this is precisely what makes Saudi Arabia’s behavior in this episode even more reckless than the ongoing crackdown on even its milder critics or its increasingly callous disregard for human life in the Yemen war. Trump has invested political capital and extended unprecedented goodwill to MbS, drawing considerable criticism in the process. In a sense, this has been Trump’s “big bet,” perhaps his biggest one in the Middle East. As Axios’s Jonathan Swan put it, “The Trump administration, led by Jared Kushner, made about as big a bet on MbS the visionary-reformer and the Saudis as it’s possible for a US admin to make.” The goodwill has not been reciprocated. Rather, MbS is, in effect, taunting Trump, gloating in his ability to get away with anything.

A supposedly close friend acting in such a manner could be—and perhaps should be—taken by Trump as a personal affront. This further and perhaps even conclusively invalidates Trump’s decision to orient America’s Middle East strategy around a new and changing Saudi Arabia. Trump’s recent comments were somewhat unclear, but he seemed bothered that he even had to talk about it: “I am concerned about that,” he said in response to a question about Khashoggi’s disappearance. “I don’t like hearing about it, and hopefully that will sort itself out. Right now, nobody knows anything about it. There’s some pretty bad stories about it. I do not like it.”

With Trump, however, it is always hard to tell where his passions may lead him. Trump may not care enough about the assassination of a prominent journalist, who was also a U.S. resident and a Washington Post columnist. But the events may also awaken the side of Trump that, first as a candidate and now as president, has suggested an impatience with Saudi Arabia and its military dependence on the United States. In an October 2 rally in Southaven, Mississippi, Trump riffed, saying something that received little attention at the time but in any other administration would have likely have been front-page news: “We protect Saudi Arabia—would you say they’re rich? And I love the king, King Salman, but I said, ‘King, we’re protecting you. You might not be there for two weeks without us. You have to pay for your military. You have to pay.’”

It is little surprise that Khashoggi’s disappearance has provoked not just frustration from U.S. politicians, but anger, including from Senator Lindsey Graham, who said there would be “hell to pay” if Khashoggi was assassinated. This is the danger of transactional relationships with countries and rulers that not only don’t share our values, but often don’t share our interests either. Outsourcing our Middle East policy to a reckless leader who appears to have such disrespect for the United States—and its support for his country—was always a mistake. Now it is also an embarrassment.

How will US removal of Turkestan Islamic Party from terrorism list affect Syrian file?