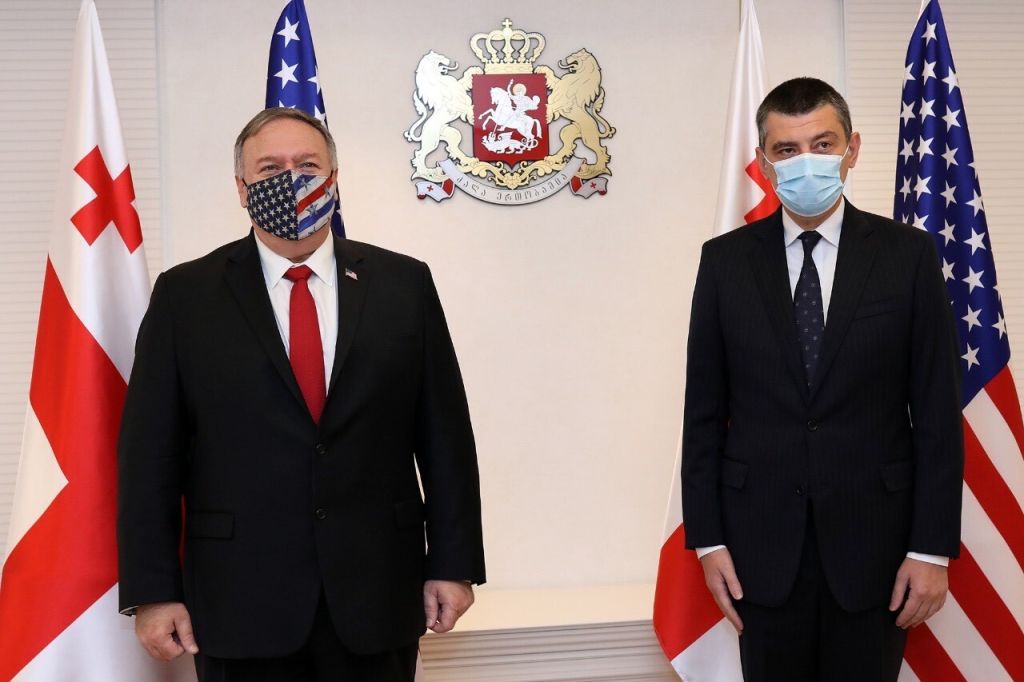 
Secretary of State Mike Pompeo has embarked on a tour through Europe and the Middle East, beginning in France and travelling on to Turkey, Georgia, Israel, the United Arab Emirates, Qatar, and finally, Saudi Arabia. Pompeo’s visit to the small post-Soviet democracy Georgia is particularly notable and reflects U.S. efforts to reassure Georgia of its support as a strategic partner. As possibilities for Western engagement in Eastern Europe and the South Caucasus are increasingly diminished by Russia’s rising force projection, the visit is an opportunity to consolidate President Donald Trump’s regional focus on great power competition with China and Russia.

Regional security is likely to feature prominently during Pompeo’s meetings with Prime Minister Giorgi Gakharia and other Georgian officials. The recent ceasefire in Nagorno-Karabakh has reshaped regional geopolitics with Russia and Turkey empowered by the shifting of regional borders without Western involvement. This means Georgia is now surrounded by Russian troops in the north, where there is ongoing threat of Russian borderization, and in the south,­ where two thousand Russian troops were recently deployed in Nagorno-Karabakh.

Pompeo’s visit offers much needed reassurance to its strategic partner Georgia. Although U.S. engagement in the South Caucasus is increasingly affected by the power projection of Russia, Georgia benefits from strong bipartisan Congressional support in Washington, where Republican Congressman Adam Kinzinger and Democrat Congressman Gerry Connolly co-chair the House Georgia Caucus. This affords Pompeo some flexibility in increasing U.S. security support and presence in the region, and ultimately taking steps to deter Russian power projection.

Pompeo will be looking to end Trump’s era of great power competition in Eastern Europe and the South Caucasus on a high note. Pompeo’s visits to the region have largely focused on a containment agenda, with a series of policy successes in recent months to increase U.S. presence at the expense of Russia and China. The Secretary of State has facilitated a series of major investments in Eastern European energy infrastructure, all of which have simultaneously curtailed China and Russia activity while strengthening regional energy security. On October 9, Romania and the U.S. signed the largest economic deal in their bilateral history – an $8 billion agreement to develop a nuclear power plant (China had originally won this bid). Ten days later, the U.S. signed a nuclear power plant package with Poland worth $18 billion. And just four days after that, a third nuclear energy cooperation agreement was signed with Bulgaria, again undercutting Russian and Chinese bids.

It’s possible another energy deal could be on the agenda this week. Indeed, Georgia is involved in a number of projects that would decrease energy reliance on Russia and contribute to energy security in the region. In one project, Georgia hopes to strengthen the existing high transmission electricity line linking the South Caucasus and Central Asia via Georgia to Europe through the Black Sea and Romania. Georgia and Romania also plan to develop a liquified natural gas connection that would enable Azerbaijani gas to bypass Russia and access Europe through the Black Sea. Romanian-based OMV Petrom has recently secured a bid to support Georgia’s Black Sea deep sea energy explorations. Finally, the proposed White Stream pipeline will transport natural gas from the Georgia through the Black Sea to Romania and Ukraine, and onwards to Central Europe. Greater U.S. support for some, if not all, of these regional energy security projects would assist in increasing Georgia’s and Black Sea region energy autonomy while deterring China and Russia.

In the year since the U.S. and Georgia marked a decade of strategic partnership, security in the region has become even more volatile. It would be advantageous for both sides if security cooperation was enhanced (a similar commitment to strengthen ties between Romania and the U.S. was recently announced). Georgia’s path toward NATO interoperability has made significant progress, as has Tbilisi’s cooperation with NATO through increased military exercises. But given rising regional instability, the strengthening of U.S.-Georgia defense ties is entirely necessary, something that will require bipartisan Congressional support beyond the Trump administration.

Trade and investment ties have taken a back seat to the security relationship between Georgia and the U.S. And for good reason. Georgia continues to face an existential threat from Russia and actively endures occupation of nearly 20 percent of its territory by Russian and separatist forces. However, the U.S. has long been a strong economic contributor to Georgia’s post-Soviet transition with Georgia often one of the largest per capita recipients of U.S. foreign assistance. Funding has supported infrastructure projects and human development and has incentivized economic and governance reforms through conditionality based programs like Georgia’s two Millennium Challenge compacts. Support for this level of engagement looks likely to continue, with the U.S. Senate Appropriations Committee last week proposing a significant increase in aid for Georgia.

This economic relationship is outlined in the U.S.-Georgia Charter on Strategic Partnership, which formalized bilateral cooperation in security, trade and economics, democracy promotion, and people-to-people exchanges. While the Trump administration has maintained levels of engagement outlined in the charter, it has largely sidelined opportunities to deepen economic ties. This could have been demonstrated through an enhanced bilateral investment treaty, or political engagement on Georgia’s accession to the World Trade Organization’s Agreement on Government Procurement. Trump’s approach in Georgia reflects a broader trend in U.S. trade policy to prioritize national security, retrenchment, and trade enforcement. This has curtailed opportunities for greater economic and investment engagement between the U.S. and Georgia, leading to a disconnect between the trade objectives outlined in the charter and policy realities.

In some ways, these missed opportunities have been offset by the administration’s crucial support of the Three Seas Initiative (3SI), an infrastructure investment program seeking to enhance energy, transport, and information technology links between the Baltic, Adriatic, and Black Seas. While Georgia has so far been on the outside looking in, the Three Seas Business Forum opens the door for further engagement. The Trump administration’s recent closure of a Generalized System of Preferences (GSP) review into Georgia’s labor practices was also an important acknowledgement of Georgia’s economic reforms. Furthermore, the U.S. Trade Representative’s roll out of new triennial reviews of importing countries’ (like Georgia) commitments under the GSP program should provide further certainty to businesses and a beneficial framework that encourages additional bilateral trade.

Perhaps Pompeo’s visit to Tbilisi can secure Trump’s regional trade and investment legacy and lay the groundwork for future economic engagement under President-elect Joe Biden. The U.S. pledge to match 30 percent of 3SI combined contributions up to $1 billion signaled the Trump administration’s commitment to the Black Sea, a commitment that many in the region will be hoping continues under Biden. On trade, there is still ample opportunity to reinforce this administration’s bilateral support for Georgia. In 2019, nearly 75 percent of Georgia’s exports to the U.S. were eligible for duty-free treatment under the GSP program, which expires on December 31. While GSP is under USTR jurisdiction, a recognition of the program’s importance by Secretary Pompeo to Georgia’s leaders would help reinforce U.S. commitment to bilateral trade. It would also provide a signal to Congress that the administration is ready and willing to back an extension if it is agreed to by both houses. Furthermore, signing off on duty-free rates for some Georgian products, combined with the USTR’s recent clearance of the labor case, could enable negotiations of a long sought free trade agreement between Georgia and the U.S, effectively resetting trade ties ahead of potential negotiations in the next administration. As an added incentive, an agreement backed by U.S. rules and standards would help counter Chinese influence in the region.

The relationship between the U.S. and Georgia has stayed strong throughout Republican and Democrat administrations. As Pompeo prepares for his visit to Tbilisi, he should be pleased with his own administration’s efforts to reinforce America’s alliance with Georgia and other Black Sea nations. Russia’s ongoing aggressive behavior, and China’s growing presence in the region, indicate that the U.S. made the right decision in shifting toward increased great power competition. However, with the regional dynamics of the Black Sea’s constantly shifting, there is more work to be done. Pompeo should take this opportunity to consolidate President’s Trump’s legacy by reinforcing America’s commitment to Georgian security and laying the foundations for further economic integration.

Dr. Iulia Joja and Ryan Olson are Senior Fellows with the Middle East Institute (MEI) Frontier Europe Initiative. The views expressed here are their own.

‘Representing All of Egypt’: The Story Behind the First Egyptian Restaurant in Las Vegas