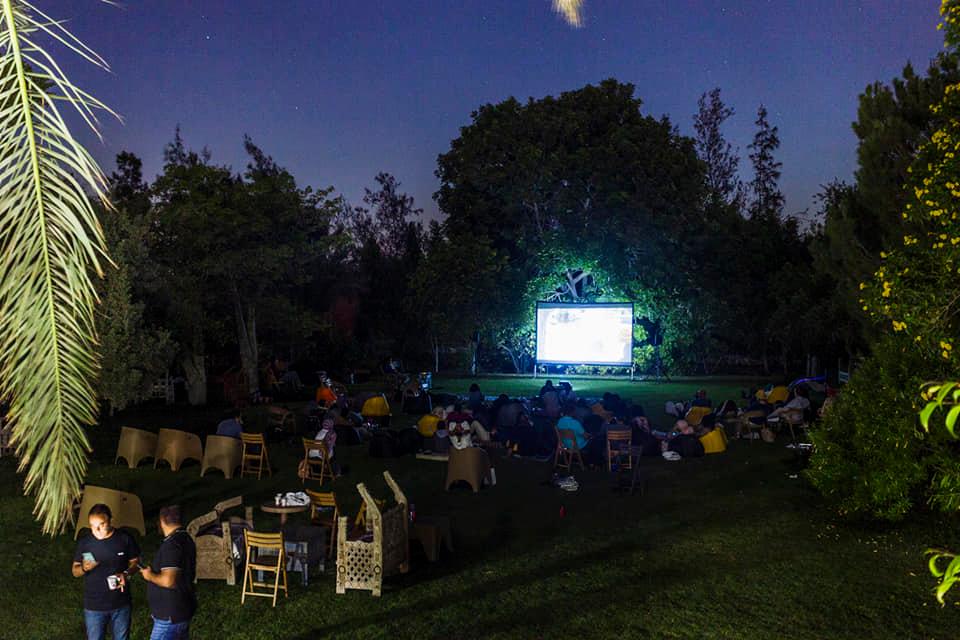 Imagine the sound of bees buzzing in the distance as one watches a documentary on beekeeping, or being surrounded by people donning apocalyptic gas masks whilst a movie about the apocalypse is being screened – these immersive film screening experiences have actually been brought to life by Platonic Productions.

Platonic Productions is a new events and production company founded by dynamic sibling duo Reem and Ramy Allam in October 2020. With the aim of blurring the lines between cinema and reality, the Allams decided to create a first-of-its-kind immersive cinema experience for the Egyptian public. Much like immersive theatre, immersive cinema consists of physically placing audiences in the atmosphere of the film being screened, usually done by having the screening set in a location related to the topic of the film and experiencing events inspired by the film as well.

“When Covid-19 pandemic hit the world, a debate started in the arts sector on whether the future of events would be online, and how it could become the new normal even after the pandemic ends,” explains 27-year-old founder and producer of Platonic Productions Reem Allam, “However, me and my brother, filmmaker Ramy Allam, thought otherwise. We believe in the power of live events, that online can never capture, whether it’s the personal connection element with what you’re experiencing with all your senses, or the satisfying communal feeling of enjoying something together as a collective.”

With that, the young siblings decided to venture into the world of immersive cinema, bringing Reem’s event management experience into play with Ramy’s film experience. After having their first event proven to be successful, the Allams planned a second event shortly after, as well as already having a third one in the works.

The first Platonic Productions event, which took place in collaboration with Orient Productions back in October, consisted of an Oscar-nominated documentary about beekeeping and honey making called ‘Honeyland’, being screened in an actual honey farm in Egypt. “In this first of its kind immersive event, audiences did not just watch the film in the beautiful organic farm of Bostan Set El Hosn, but they wore bee protection face shields and watched how the farm extracts honey from their beehives, with fresh honey tasting and preservative-free farm food offered,” Reem tells Egyptian Streets.

“The amazing feedback from audiences who came made us genuinely feel the power of immersive cinema experiences, how such events can transport you to another world or show you the real one,” she continues.  As for their second event, they partnered up with outs:de to showcase ‘Al Apocalypse’ (The Apocalypse), a UNTY produced short-film about an environmental/health catastrophe in the near future where everyone is wearing gas masks.

“We decided to screen the film in a party experience on Halloween day where the musician who composed the soundtrack played his music live to the audiences… the event took place on an abandoned island by the Nile in Maadi with torn down buildings and incredible immersive visuals mapped on those ruins by Shimo Native,” Reem says.

Having an innate passion towards the arts, and both siblings already working in the arts, the Allams felt as though nothing truly compares to experiencing the magic and beauty of film as a collective. “We feel [the arts] can positively affect one’s well-being, on a spiritual, emotional and intellectual level – especially if it is experienced in an immersive collective environment, where one can truly transcend, and start questioning and reflecting on what he/she is experiencing,” Reem explains, “For once, we do not think of each other as competitors, but a group seeking unified sensational satisfaction for all. It’s an inspirational experience that we feel no one in society should be deprived of.”

Whilst the need for digitizing the world is felt now more than ever, and while it is indeed important, the Allam siblings simply do not feel as though people should forget the importance of experiencing life through all of one’s senses. In order to make these events as safe as possible, they pay close attention to following every covid-19 precaution necessary – from social distancing and limiting number of attendees to mask wearing and sanitization.

“We hope that people will come out reflecting on what they experienced on a personal and intellectual level, whether reflecting on important humanity topics like our relationship with nature and our responsibility towards it, or on their own personal lives and the power of enjoying an experience life with all the senses – watching, listening, touching, feeling, talking to others – which cannot be replaced by the more individualistic digital platforms,” says Reem.

This is only the beginning of the Platonic Productions journey, as the young and eager siblings have plenty of ideas up their sleeves. To end the year with a bang, they have already planned their exciting third immersive event. “[We are] working on a new immersive cinema event, this time celebrating an iconic 90’s Egyptian film that had a powerful impact artistically and socially when it came out, to the extent that a haircut was named after the film… we will invite audiences to dance with us on a ship in the Nile to celebrate the 30 year anniversary of the film ‘Kaborya’ (Crab) – the event will take place on a ship deck exactly like in the first scene of the classic film,” Reem reveals excitedly.

The event will feature plenty of real-time experiences inspired by the cult classic film, from eating pasta with crab to getting a ‘kaborya’ haircut. “It is our most absurd immersive event coming out, ending this year of 2020,” she exclaims.

’Tis the Season: 5 Places in Cairo to Get Christmas Decorations

Why Celebrities Follow the Latest Trends in CBD Cosmetics