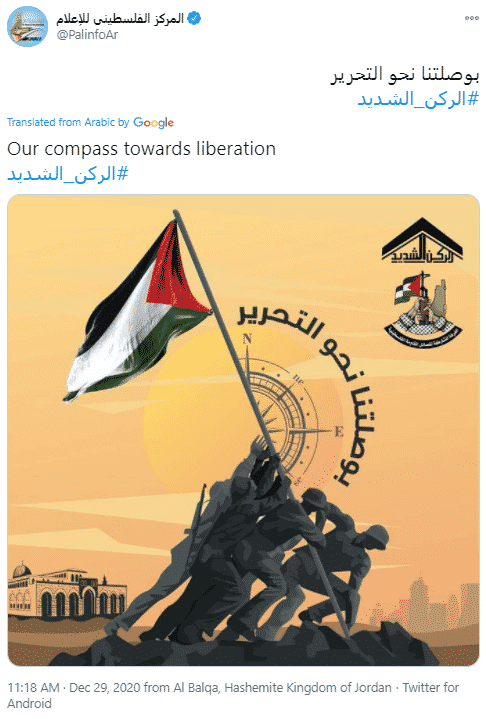 
A number of palestinian propaganda sites today tweeted out this graphic

Our compass towards liberation…our time towards co-opting and stealing.

That’s one of the most famous photographs in history, taken during the Battle of Iwo Jima in 1945.

On Feb. 23, 1945, the fighting on the small volcanic island of Iwo Jima had been raging for five days, with both American and Japanese forces suffering heavy casualties — eventually more than 6,500 Americans and 21,000 Japanese troops would be killed over 36 days of fighting.

That day, photographer Joe Rosenthal of The Associated Press hurriedly snapped a photo of six Marines who’d been ordered to raise a flag atop Mount Suribachi, the island’s highest point.

Appearing in newspapers nationwide, the photo became so popular it was made the centerpiece of a successful war bonds drive that included the six service members believed to have been in the photo.

Rosenthal’s iconic photo won the Pulitzer Prize for Photography in 1945, just over two months after it was taken, and it became a life-sized model for the national U.S. Marine Corps War Memorial in Arlington, Virginia, which was dedicated in 1954.

Yes, the photographer Joe Rosenthal was a Jew.

It’s no wonder they keep claiming Jesus was palestinian.

They’ve certainly become more and more brazen with these shenanigans in the last few years.

Zarif says US setting up ‘pretext’ for war