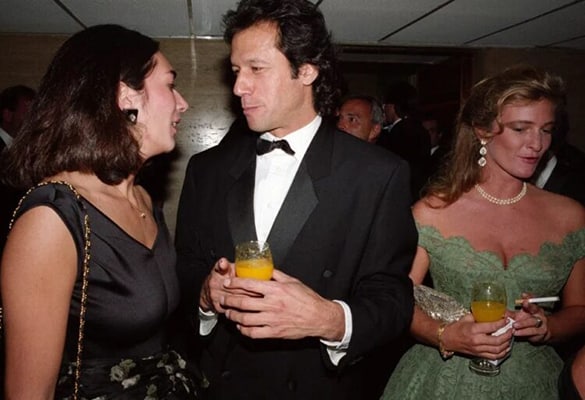 
The Prime Minister of Pakistan, Imran Khan, has gotten his antisemitic trope on, claiming – like so many Jew-haters before him – that our “powerful” lobby controls US Middle East policy.

He was just careful not to use the “J” word.

Prime Minister Imran Khan claimed Friday that Indian and Israeli lobbies are supporting the opposition parties to pressure government institutions to give an NRO to the Sharif family.

“What is this game? The game is to put pressure on Imran Khan,” PM Khan told ARY News in an interview. “But they don’t know that Imran Khan has learned one thing in his whole life and that is he doesn’t take pressure.”

He said that all the enemies of Pakistan have joined hands with the PML-N and India and Israel were also supporting the opposition.

“The Israeli and Indian lobbies work together in America,” said PM Khan. Israel’s lobby is the most powerful and that’s why America’s whole Middle East policy is controlled by Israel.”

I am sure this will make the news, especially the Jewish and Israeli media outlets (I see Algemeiner already covered it)

But here’s the Israellycool difference: how many of you will tell you how Imran Khan used to be a notorious womanizer back in the day, who fathered numerous love children?

For a man who repeatedly insisted that he didn’t want to be seen as a sex symbol it was certainly a peculiar choice.

Posing for a photograph, the then cricketer Imran Khan lounged in his Knightsbridge flat, with a painted tiger on the wall described by one visitor as “a bedroom of great expectations.”

The captain of the Pakistan cricket team – a team that would go on to defeat England in 1992’s World Cup final – was already known as one of London’s most prolific playboys, one who over the years would be linked with a roll call of glamorous beauties stretching from Hollywood to the aristocracy.

Among them were Stephanie Beacham, Goldie Hawn, Kristiane Backer, Susannah Constantine and Marie Helvin – while he also counted no less than Princess Diana as a friend.

But then as Khan himself had said meeting women was chief among “the very decadent pleasures in life” which he enjoyed – and one that led to a bitter row over his paternity of a little girl.

His wife, meanwhile – his third – is a burka-wearing Islamic mystic whose face her husband had never seen before their wedding last year.

Maybe the leopard hasn’t completely changed its spots as his second wife claimed he’d had affairs with a string of Bollywood actresses and has illegitimate children by four Indian women.

Khan has always denied that he drank alcohol or engaged in any activities that may be considered inappropriate for a conservative Muslim, but there is no doubt that by the late seventies his burgeoning sporting profile was matched by a reputation for non-stop partying at some of London’s most glamorous nightclubs.

His preferred venue was Tramp, a hedonistic Mayfair nightspot that Khan frequented so often he referred to it as his “living room”.

A regular in the gossip columns, Marie Helvin – his friend and also his rumoured lover – testified to his magnetism. “Everyone falls for Imran,’ she said. “He has a scent that is very attractive to women.”

It proved to be the case for Sita White, daughter of Gordon (later Lord) White, who was co-founder of the international building materials company Hanson plc.

Heiress to her father’s multi-million pound fortune, she met Khan on the dance floor at Tramp and embarked on a relationship which would last, on and off, for the next six years and end in controversy when, in 1992, she bore a child, Tyrian Jade and claimed Khan was the father.

Khan’s response? To first ignore her claims and then deny them – although in 1997 a US judge ruled he was the father.

Over the following years, with his own political star rising, Khan appeared to turn his back on domesticity until, in 2014 he married BBC presenter Reham Khan.

The union lasted less than a year, with Khan calling their marriage the “biggest mistake” he had made – a sentiment no doubt fuelled by Khan’s decision to publish a tell-all book in which she made a number of lurid claims about her ex-husband, among them that he believes in black magic and had bedded Bollywood actresses and had children with four other women.

According to the book, Imran who was regular drug abuser used mouth guard to stop his teeth from clenching due to cocaine. Not only cocaine, Imran took heroin, and other banned drugs which included Rohypnol, which is popularly known as ‘date rape’ drug.

In other words, he may falsely claim the Jooooos control US Middle East policy, but he can’t even control little Imran.

I know all this because growing up in Australia, I was familiar with Khan as a Pakistani cricketer of note, one who had a reputation for bowling a maiden over, and cracking one through the covers.

Re: Was the US Embassy move to Jerusalem actually a hoax?