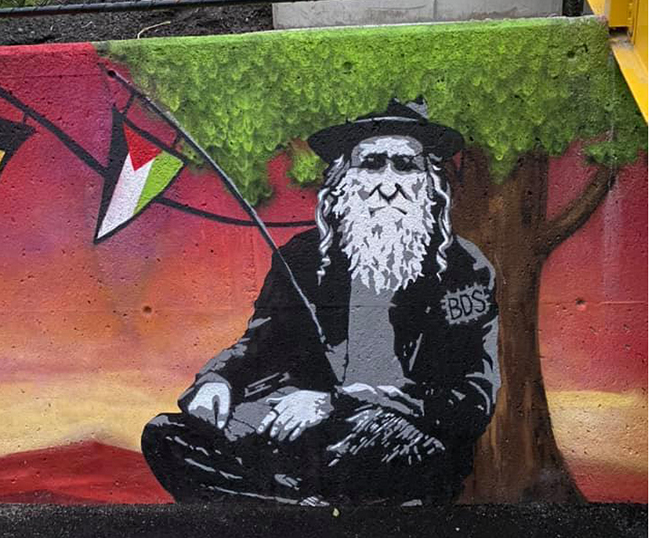 
One of the most painful images from the War of Independence is this photo of an elderly Jewish man thrown out of his home by Jordanian forces.

Jordanian forces would go on to loot and destroy the Jewish quarter of the Old City of Jerusalem, including synagogues, homes, businesses, and even graves. From this time until 1967, when it was liberated, the area was off limits to Jews.

I am bringing up this somber image of a suffering, elderly Jewish man because it has been co-opted by a hater in Norway, in their latest display of depravity:

The creator of this vile “art” is a street artist called AFK, who resides in Bergen. Apparently, it was removed, and he cannot understand why, since he claims the message is “one of compassion, solidarity and peaceful solutions.”

Deluded as well as morally depraved.

Did I mention this was put up around a playground, for children to see?

He has since amended it slightly and put it up elsewhere in Bergen:

Apparently, the BDS message is now hidden (it says BDS on the book he is holding).

Here is another one of his creations, in case he it wasn’t clear we are speaking of an antisemite here:

As disgusting as this is, it is hardly surprising. These are the same people who have already co-opted Anne Frank

Unfortunately, these Jew-haters are regularly answering the question “how low can they go?”

Hizbut Tahrir in Malaysia: A Threat to National Security?

This article is part of a series that explores the threat...
Read more