Normalisation, the Poisoned Chalice that Shows the UAE Must Return to Diplomatic Neutrality 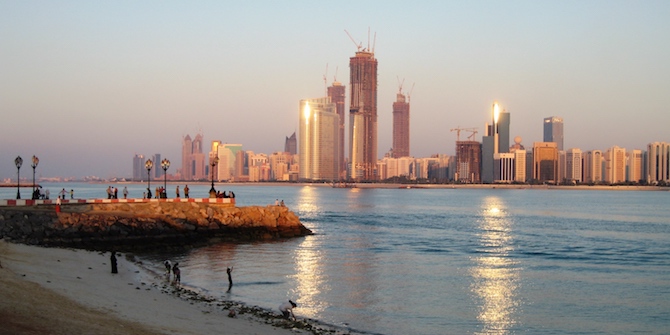 The corniche of Abu Dhabi, the capital of the UAE. Source: Shenli Leong, Flickr

The current violence in Israel puts the UAE’s foreign policy in the spotlight as the government is waking up to a wave of pro-Palestinian fervour from its citizens. In the last ten years, the UAE has burst onto the diplomatic scene, from Yemen and Qatar to Libya and Israel. As many of these gambles have gone wrong, it is worth asking if the UAE would not be better off scaling back its activity and returning to its historic policy of neutrality.

In the last decade, the UAE has unleashed a flurry of international activity, ranging from major treaties to waging war. The current events in Israel demonstrate that many of these were high-stakes gambles that yielded a mixed payoff at best. While the nation’s founder Sheikh Zayed opposed normalisation, his policies have since been gradually reversed. Accelerated by the shared antagonism towards Iran and the Muslim Brotherhood, cooperation in surveillance and intelligence matters has been in place for years, from informal coordination  in 2009 to the 2020 bilateral normalisation agreement. Other drivers were the UAE’s interest in trade relations, surveillance technology and armaments and  its intimate relation to the Trump administration. The Abraham Accord brought material advantages and was greeted globally as a diplomatic success and a potential step towards ending the Israeli-Arab conflict.

But this opportunity did not materialise and the UAE-Israeli alliance is instead isolating the UAE in the Arab world. The domestic cost of this treaty, however, may outweigh the diplomatic one. By reckoning that citizens’ interest in the Palestinian cause was waning, the government may have underestimated how much Emiratis, young and old, despise normalisation and passivity in the current Palestinian crisis and overestimated its ability to control the public outcry through censorship and social engineering. This misjudgement is now reversing any goodwill the government gained through its handling of the COVID pandemic.

In contrast, Oman was astute enough to eschew Trump’s overtures and wait for the results of the 2020 presidential elections. After Biden’s win, the Omani government declared that it had no interest in normalisation. Today, this seems to have been the more farsighted strategy. Maybe the regime had better knowledge of its citizens’ aversion to normalisation and thought it wiser to indulge this sentiment, especially after stoking discontent through austerity measures like cutting salaries for new state employees and introducing VAT.

Before this latest misadventure, the UAE had a couple of high-profile appearances on the international scene, for example in the Yemen war. Compared to the war’s outcome for Saudi Arabia – a six-year quagmire – the UAE has fared better. It gained influence over the Bab el-Mandeb (‘gate of tears’) Strait by supporting the secessionist Southern Transitional Council and demonstrated its capability of independently conducting successful combat operations for the first time in its history.

Despite this success, Emirati influence in Yemen is fragile as the short-lived and heavily contested Emirati presence on the strategic island of Socotra showed. And in 2019, the UAE expeditionary force had to retreat from Yemen after tensions rose back at home with Iran, indicating how overstretched the small Emirati military is. Finally, domestic support for the war evaporated as the war dragged on and casualties kept rising and the initial media celebration of the war and its ‘martyrs’ was abandoned.

Another mixed success was the Qatar blockade. The UAE was its most eager advocate because it allowed the regime to ramp up surveillance and attack the Qatar-supported Muslim Brotherhood more aggressively. But Mohammed bin Salman surprised his ally when he abruptly cut his losses and unceremoniously resumed relations in January. The long siege also permanently damaged Emirati business ties with Qatar, which further reoriented its economy towards Iran and Turkey although a few vital connections with the UAE, like the Dolphin Energy pipeline, continued to operate quietly through the blockade.

Israel, Yemen, Qatar, as well as minor engagements – support for the Bahraini government against the popular uprising in 2011, for Abdel-Fattah el-Sisi’s in Egypt or Khalifa Haftar in Libya – mark the UAE’s turn towards an interventionist foreign policy. This feat is even more impressive considering just how much the country is punching above its weight, with a total population about the size of Honduras, an Emirati citizenry the size of Austin, Texas, a GDP about that of Denmark and its armed forces smaller than those of Romania (about 20,000 deployable troops).

But the muscular diplomatic stance is precarious as the country sits awkwardly sandwiched between two regional heavyweights Saudi Arabia and Iran. Links with Iran were historically intimate, especially in Dubai and the Northern emirates, but hostilities have continued to increase with Iran from the revolution of 1979 to last year’s UAE-Israel deal, which Iran roundly condemned. In parallel, countervailing Emirati alliances with Saudi Arabia and Western partners have grown over the years. This assertive isolation policy towards Iran preserves the UAE’s role as a vital ally for the West and keeps a potential economic rival at bay. The price of this approach is foregone trade and economic opportunity, complete military reliance on Saudi Arabia and the US for protection and a hostile country that can choke the UAE’s vital access to the oceans, the Strait of Hormuz.

This reliance may become yet another miscalculation. While the UAE-Saudi relationship has been close and their foreign policies mostly aligned, they are drifting apart. Mohammed bin Zayed and his erstwhile protégé Mohammed bin Salman follow diverging strategies in Yemen, Qatar and Israel, among other diplomatic frictions. More importantly, the countries are fierce economic rivals and compete in different industries from tourism to finance. In February, Mohammed bin Salman finally took the gloves off and tried to force international firms to relocate their regional headquarters to Saudi Arabia, a thinly veiled attack on the UAE’s lead in that area.

A cost-benefit analysis of the UAE’s perky foreign policy thus indicates limited benefits but high costs. With ever-tighter public finances, the military consumes an estimated 5.6 percent of GDP and the duration of conscription for male citizens has been extended twice already to currently 16 months. Meanwhile, volatile factionalism is degrading diplomatic relations with its allies, including Saudi Arabia and the US under the new administration, leaving the country with few dependable partners. Casualties from the Yemen war and passivity towards Israel stoke indignation among its citizens who increasingly perceive the latter policy as a betrayal of the Palestinian cause.

The flaring opposition to foreign policy adventures should be a wake-up call for the government. With little room to manoeuvre diplomatically and domestically, it should abandon venturesome diplomacy and instead  return to a more cautious attitude. Countries across the globe thrive under neutrality, from Mesoamerica’s poster child Costa Rica, European countries like Ireland, Sweden, Finland and Austria to the UAE’s preferred role model, Singapore. Closer to home, Oman (the ‘Switzerland of the Middle East’) has kept neutral and out of trouble. But the UAE need not look abroad. Neutrality was Sheikh Zayed’s foreign policy for the first 33 years of the country’s existence. Perhaps it is time to go back to these roots.