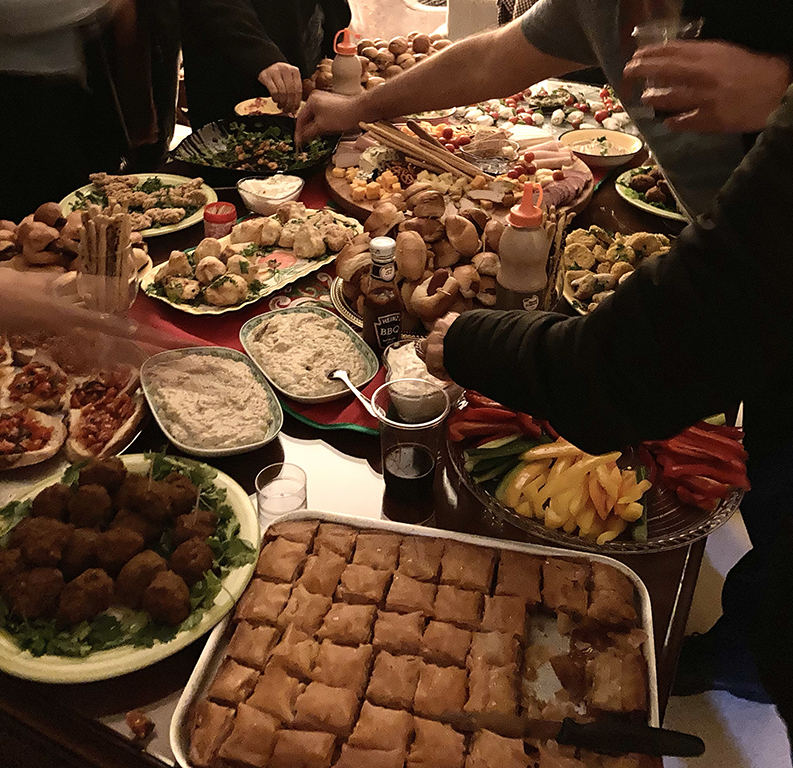 Picture this: A loud family gathering, a dining table full of traditional western and Egyptian Christmas dishes, a few slightly intoxicated family members trying to ‘out-loud’ each other, a few others running after the adrenaline-filled group of kids and the young adults who try to make up their mind between receiving this year’s ‘eideiya’ (an Egyptian holiday tradition in which older members of the family hand out money to younger ones) or giving one themselves.

It is beginning to look a lot like Christmas, isn’t it? Egyptian Christmas, that is. Every year during Christmas time, people rush back to some of their favorite holiday films—almost as if watching them is in and of itself a tradition. With that in mind, one begins to wonder, what if we had a classic Egyptian Christmas film that we could always go back to watching every year?

While this idea may seem slightly far-fetched, an Egyptian Christmas film might actually make for some great humor-filled content. Since the majority of the Egyptian Christian population belongs to the Coptic Orthodox denomination—which represents over 90 percent of the country’s Christian community, the film would naturally showcase the various traditions of Coptic Christmas, which falls on the 7th of January. This could be a great way to get people acquainted with how Christmas is celebrated in Egypt, along with all the culture-specific traditions that come along with it.

It would be great, for example, to showcase how most Coptic families fast for Christmas—a fast that consists of a vegan/pescatarian diet for 43 days. What would be even more interesting is showcasing the family members who struggle to fast for all 43 days, or those who fast, but make exceptions for themselves in the form of milk with their morning coffee, or even those who say they are fasting in front of family, but go out for burgers with friends.

And then of course, there is the integrating of traditions with current trends—one of the young adults of the family could be fasting for example, but going on and on about how this is basically veganism and how it is ‘a really healthy lifestyle choice’ that also happens to be ‘great for the environment’. Other than the fast however, there is also the tradition of going to church on Christmas Eve.

Copts in Egypt are usually very adamant about churchgoing when it comes to holiday seasons, and the crowd-filled churches packed with a bunch of people wearing their finest clothes and reciting prayers in unison is actually quite the sight. The atmosphere at church on Christmas Eve is both powerful and moving, and always heartwarming to experience—even for those who don’t attend church regularly. This could ultimately be a very magnetic screen moment.

Then comes the Christmas Eve (and Day) shenanigans. Each family assuredly has their own set of traditions and quirks, however they are always entertaining, relatable and exceedingly wholesome. If well-written, the set of characters portraying a traditional Coptic Christian family on Christmas Eve could absolutely be the key to this film’s success.

The plot of the film is where things get interesting. A storyline that would make a lot of sense and would include a myriad of self-struggles, identity crises and realizations would be one in which one of the main characters tries to enforce western Christmas traditions unto their family.

The main character could, for example, try to enforce gift-giving traditions rather than every year’s eideiya; in addition to this, the main character could also try to recreate snow at some point in time, they could also try to make a round of hot chocolate for older family members, instead of tea at a random family gathering before Christmas, only to be met with a bombardment of sarcastic comments.

Ultimately, the plot would present a struggle of identity that would be brought about as a result of how greatly we have been influenced by the West throughout the years—especially when it comes to Christmas, which is significantly different in Western culture, and whose traditions also differ greatly depending on where one is in the world.

Set against a backdrop of relatable Egyptian humor and sarcastic and witty comments, the main character would eventually find value in their own set of traditions and show gratitude towards their own religious and cultural norms, all thanks to their somewhat dysfunctional, but greatly supportive family.

Should this film be both well-written and well cast, it could truly become a hit. The key however, is to focus more on the relatable human aspects of holiday experiences—ones that surely anyone watching in Egypt could relate to at some level.

That being said, it is about time someone decided to take on an Egyptian holiday film—whether it be for Christmas or Ramadan—as these are some of the most distinguishable moments of any traditional Egyptian household.