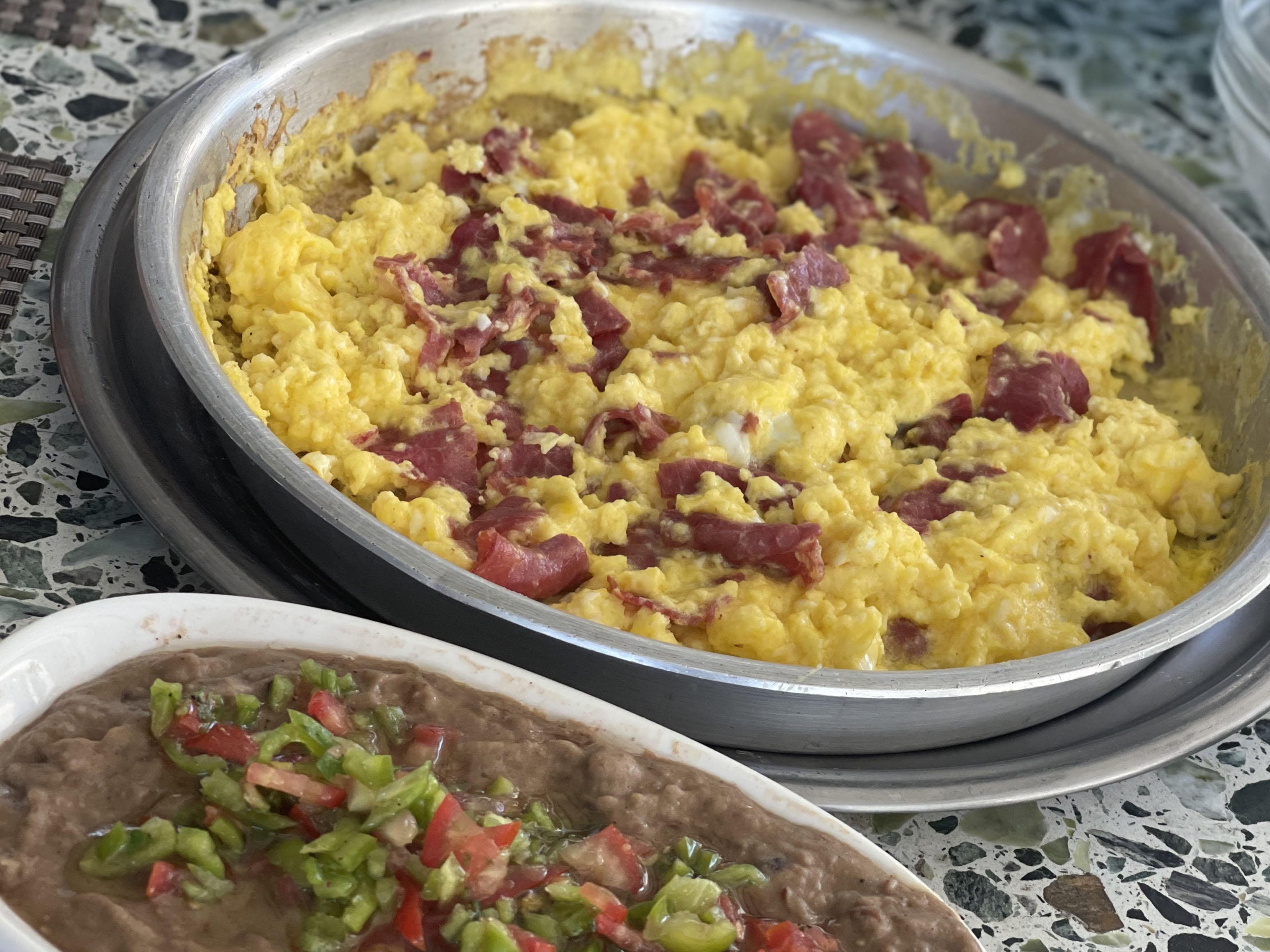 When a craving for an oriental Egyptian breakfast strikes, it’s hard to shake. That’s how my companions and I felt as we entered Sheikh Zayed’s Arkan Plaza for an early breakfast on a quiet Friday morning.

Mistiqa’s sign and interiors immediately captured our attention, perhaps due to the relaxing ambience of its spacious outdoor area. The warm green and beige décor looked welcoming, and the abundance of plants and fans made the outdoor seating look appealing despite the hot weather.

As soon as we sat down, the waiter arrived with our menus and we began scouring our options, which ranged from classic choices like cottage cheese with tomatoes to richer breakfast items like feteer meshaltet. Like how most oriental breakfasts go, we decided to go with a little bit of everything and share.

The waiter was very attentive and helpful, accommodating my request for shakshouka (which isn’t on the menu) by offering scrambled eggs with vegetables and chili instead (around EGP 48). We also opted for two types of fuul, one with ‘khalta’ (EGP 49) and one with olive oil (EGP 49), along with several orders of eggs with pastrami (EGP 66), which the waiter offered to include in one big plate instead of several small ones. We also ordered taamia (or falafel) (EGP 49), white cheese with tomatoes (EGP 35), sojouk (EGP 110), and oriental salad (EGP 45) and tahini (EGP 35) on the side.

The food didn’t take long to arrive, and soon we were bombarded with an array of dishes that were waiting to be devoured. With oriental breakfasts, classic baladi bread is the ultimate utensil, and we were delighted to find it fresh, warm, and perfect for dipping using the ‘wedn el otta’ (literally translating to ‘cat ear’) method.

We started off with the eggs; the makeshift shakshouka was delicious and very well-seasoned, but the true winner in that category was the scrambled eggs with pastrami dish. The egg to pastrami ratio was just right and it was reminiscent of the homemade ‘beid bl basterma’ many Egyptians remember from their childhoods. Like the eggs with pastrami, the cottage cheese with tomatoes also tasted very authentic and homemade – it was a great palate cleanser in between the heavier dishes.

The fuul dishes were also delicious, especially when combined with tahini and salad. While they were both good, it’s difficult to argue which was better since it’s a matter of personal preference; I personally preferred the one with ‘khalta,’ which was topped with diced onions, tomatoes, and peppers because it felt richer, but there’s something to be said about the old-school version that only needs a drizzle of olive oil.

Taking a break from the breakfast items with the sojouk wasn’t the best option because the tiny pieces of sausage (the size of large olives) were dry and under seasoned – perhaps because the sojouk is not originally a breakfast item and is usually offered as an appetizer with lunch or dinner. If improved by adding pomegranate molasses and reducing the cooking time, it would make a great beachside snack, especially since Mistiqa has another branch at Amwaj along the North Coast.

The taamia was by far the best item on the menu; it was fried perfectly so it wasn’t oily, and it was seasoned exceptionally; we couldn’t help but finish off the plate by making taamia, tahini, and salad sandwiches. The oriental salad was unfortunately underwhelming because the dressing wasn’t flavorful enough, so it might be wise to go for pickles instead.

Despite already being full, we knew we had to try the feteer meshaltet to end the outing on a sweet note, so we opted for two slices (EGP 55). Each slice was quite large and served with a small side of honey, molasses, and cream (qeshta); it was very rich and heavy but could be great as a standalone snack with tea or coffee. Personally, we would have preferred to have it served with a tahini and molasses mix (asal w teheena) but it worked well with the honey, the sweetness of which was toned down with the cream.

One thing is for certain; this will not be our last visit to Mistiqa. The relaxing atmosphere, the helpful staff, and the well-prepared food made for a very satisfying culinary experience for anyone who is Cairo-bound during the summer weekends – though we’d bet the Amwaj branch probably offers an even better beachside dining experience.

After Finding Peace in the Mountains, This Egyptian Helps Others Do the Same