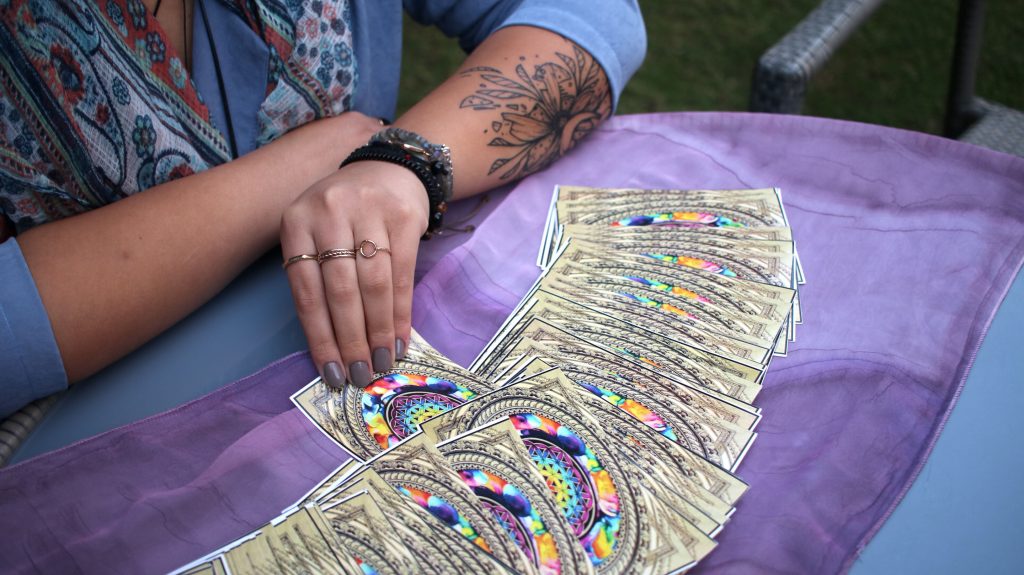 Tarot Card Reading is a form of healing that’s become more popular in recent years, but it’s still quite uncommon, as research indicates that only 17.9 percent of 33,371 respondents in 21 European countries had used some form of Complementary and Alternative Medicine.

For clarification, we arrive at Estefham; Sohayla El Fakahany’s new tarot-card reading business. The 24-year-old started exploring the alternative healing world when she started her M.A. in Anthropology at The American University in Cairo.

“It’s on how people treat themselves in Cairo with methods other than modern medicine. So, I look at a range of things that start at coffee cup reading and move to full on Reiki [Energy healing] and ayahuasca [a psychoactive brew]. In the time I spend in the field, as an anthropologist, I have to carry out participant observation,” El Fakahany told Egyptian Streets.

Through the participant observation, she took courses in everything from Reiki to crystal healing to quantum touch, and worked at a wellness center for six months. She did everything that can be done in the field in Cairo for the sake of her M.A, she said, then, she realized she actually enjoyed it.

“Growing up, I was very intuitive, scary intuitive. I know things I don’t want to know. I pushed these things away as far as possible. There’s a percentage, a few number of people around the world that have this. Some continue with it, and some people are like, ‘you know what, screw that.. It’s not my thing to play.’,” she added.

What El Fakahany is referring to is her feeling of sensing emotions and events before they happened, which she describes as a very small gift she didn’t ask for, but is grateful for.

“I suppressed it for so long. Then, before graduating, I was like, ‘You know what, this is something that is me, and this is who I am.’ The more I suppressed it, the more it sent more direct messages, like ‘I’m in you, you have this gift, you need to listen to it.’” she said.

El Fakahany is aware of the skeptics, and she’s aware of the fact that what she experiences is unfamiliar to many. The way she talks to skeptics is by sharing her experiences, without any aim of trying to convince them, but rather for the purpose of human connection.

What pushed her to finally embrace this gift is her experience of talk therapy, which she says did not help her, but it made her more anxious and left her with more questions.

El Fakahany is not alone in her experience of more traditional therapy, Psychotherapist Dr. Leslie Durr points out in a PsychCongress article that there are many ways in which talk therapy can fail, despite the proven scientific effectiveness of CBT (Cognitive Behavioral Therapy).

Ways in which talk therapy can fail include therapists working from obsolete theoretical models, or therapists who don’t redirect patients to focus on their own issues rather than outside issues. Moreover, often there is a mismatch between the person and the therapist and they need to find a more compatible one, which is not the easiest or most comforting process.

Essentially, talk therapy is not scientifically proven to be ineffective, in fact, it is the opposite. However, it is very common to have a failed talk therapy experience due to any of the above reasons, and those reasons often tend to happen in the first experiences of therapy, which disinterest the person from the idea to begin with.

Why were Tarot Readings the solution for El Fakahany, then?

“Tarot cards will also always leave you with more questions, but for me tarot cards are the cleanest mirror you can ever look at. It’s you 110 percent,” she said.

Influential Swiss Psychiatrist Carl Jung explained that tarot cards were an easy way to represent the ‘archetypes of mankind’—or universal traits like strength, ambition, and passion—in psychology, making them ideal tools for therapy and mental health.

“The cards combine in certain ways, and the different combinations correspond to the playful development of mankind,” he said in a 1933 lecture.

One thing that separates El Fakahany from many Tarot readers, however, is that she never says the word “future” in her readings.

“I say If you continue with this dynamic, this is what’s more likely to happen, and if you continue to focus on your fears and what’s stopping you from reaching what you want to reach, this is going to happen. But this is very different from me telling you ‘this is going to happen tomorrow.’ Humans are very changeable and it’s always about becoming and ever changing souls and regeneration and rebirth and this is exactly why I’m here,” El Fakahany said.

Jung’s theory supports this notion, calling for an intuitive method with the purpose of understanding the flow of life, possibly even predicting future events by reading of the conditions of the present moment. It is less “mystical” than is commonly thought and becomes more of educated guesses about what the future may hold according to current trends.

“We can predict the future, when we know how the present moment evolved from the past,” Jung said.

El Fakahany believes in a scientific basis for energy medicine, rooted in her training.

“Your graduation project from crystal healing is to get a scan or a blood test. You use just crystals and the person’s charts have to improve for you to graduate. For Reiki, it’s the same thing. You have to have physical proof that you made this person get better in some sort of medical issue,” she told Egyptian Streets.

According to the University of Minnesota’s Center for Spirituality and Healing, data from several strong scientific studies support the ability of Reiki to reduce anxiety and pain, and suggest its usefulness to induce relaxation, improve fatigue and depressive symptoms, and strengthen overall wellbeing.

Despite emerging research proving energy medicine to be effective, many of these methods, tarot reading included, are still considered pseudoscience by many scientists and traditional doctors, like Jonathan Jarry from McGill University’s Center for Science and Society who claims studies of Reiki and other energy healing therapies tend to be of poor quality and, “while these interventions can be relaxing, there is no good evidence they can treat any disease.”

Significant studies do agree on the fact that Energy Healing is unlikely to harm you, though, and in the worst case may just be ineffective.

While El Fakahany has been doing Tarot readings for friends and family for years, she unexpectedly started her public business “Estefham” a few months ago by influence from friends.

A friend came up to her, telling her he wanted her to do a tarot reading for him for two years.

“I told him ‘you know what, I have the cards in my car just by coincidence. Let’s do your reading at the car’s boot.’ We did the reading right there in front of the cafe.”

Her friend was amazed by the experience and she explains that these amazing reactions came out of him.

She did three things before starting her official Tarot Reading business; developing a therapist database for clients, creating a resource list to send to them post-session, and taking a personal vow of confidentiality.

“I’m not a therapist, I will tell you a lot of things and you’re going to leave feeling much better, but there are things that you can’t open for someone and just leave them.. I have my research to do and your homework to do, I send you guided meditations, if you’re more scientific, I send you articles about emotional intelligence, for instance, if you’re more artistic, I send you a short movie about dealing with the same thing,” she added.

As she finishes her M.A., El Fakahany now teaches an introductory course about the Anthropology of the Magical, Mystical, and Unseen at the Cairo Institute of Liberal Arts and Sciences. The course focuses on the bearings of alternative healing in Egypt today in relation to the religious backdrop of the country.

DOHA—From fashion to fine art, Layla Bacha has made her way quickly to the top of Qatar’s art scene. As the Qatar Foundation’s...
Read more
Arts

The Arabic Language Academies in Egypt and Damascus in particular were able to coin many of these new words, some of which were...
Read more

The 2020 American election: A view from the Gulf

Re: World’s first hijabi skater: ‘I want to show the world that our women are powerful’ – Middle East Monitor