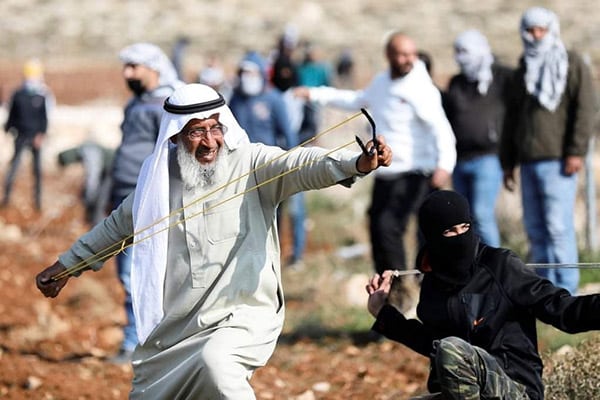 I called him “a shifty old bugger….who’s got the moves like Jagger.”

And Getty Images call him an old man too – except the difference is they actually knew his age:

AMALLAH, WEST BANK – JANUARY 04: 51 year-old Palestinian Said Arme (Abul Abd), who was seen throwing rocks along with the youth at the Israeli security forces in photos and videos taken by Anadolu Agency (AA) correspondents during a protest against Israeli settlements, speaks exclusively to AA in Ramallah, West Bank on January 04, 2021. The old man was seen throwing rocks with a slingshot in clashes with Israeli forces in Deir Jarir, while wearing a Keffiyeh and the traditional robe with his white beard. Protest took place after settlers began establishing a settlement outpost in the Sharafat mountain area in the village of Deir Jarir by installing equipment and tents on the top of the mountain under the protection of the Israeli army on Dec. 23 (Photo by Issam Rimawi/Anadolu Agency via Getty Images)

As do MEMO…who call him “elderly”:

Granted, he looks terrible for his age (everyone knows intifada-ing is bad for your skin).

But still. I will be 47 in a few months and I will launch my own intifada if anyone dares call me old!

Meanwhile, it has been reported that Arme has been arrested. Presumably not for playing bingo.

Update: The palestinian propaganda machine also love to characterize terrorists as younger than their years when that suits their goals.