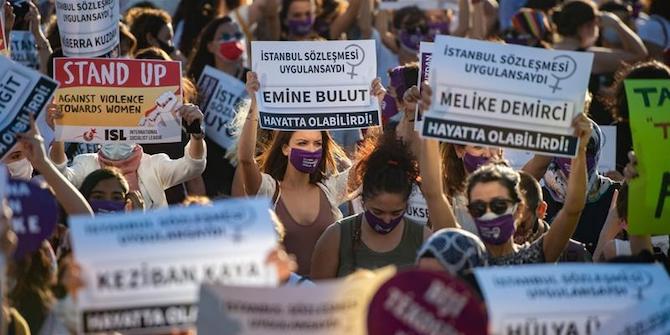 Months after President Erdoğan announced that he would be revoking the ratification of an international human rights treaty named after Turkey’s largest city, women’s rights advocates are looking to local authorities to ensure the Convention is implemented. The legally binding treaty was meant to address domestic violence, removing legal impunity for abusers and protecting victims. Turkey was the first country to ratify the Convention by unanimous vote in 2012.

Nine years after the Convention’s ratification, on the night of 20 March 2021, a Turkish presidential decree announced the country’s withdrawal from the Istanbul Convention. The president’s actions made Turkey the only member country to sign, ratify and then denounce the treaty. Despite the lack of a legal basis for the withdrawal from the Convention, which the Parliament initially adopted, it will cease to be in force in Turkey from 1 July 2021.

The speculations of a possible withdrawal were already causing alarm among the Turkish population, particularly among women. In recent years, the growth in the frequency of femicide and gender-based violence, as well as the absence of law enforcement, reflected the Convention’s incorrect and failed implementation. The authorities’ misconceptions and inaccurate interpretations of the Convention have also played a significant part in this. Given the lack of government support, Turkish women are increasingly dependent on municipalities to set the standards of the Convention that include not just punishing criminals but also victim protection and violence prevention.

Istanbul Mayor Ekrem İmamoğlu heads one of the municipalities at the forefront of the response to the ‘annulment’ of the Istanbul Convention. Since 2019, Imamoğlu has been serving as the city’s 32nd mayor. He was elected as the Nation Alliance candidate of the Republican People’s and IYI Party in the March 2019 mayoral election. His time in office, however, lasted less than a month, as the poll was annulled by the AKP in May due to suspected irregularities. İmamoğlu was re-elected with an even greater majority in the June 2019 re-run election. The triumph brought an end to the AKP’s 25-year reign in Istanbul.

İmamoğlu has adopted a transparent communication strategy and is committed to overcoming the challenges he encounters to implement his agenda. Throughout his term, Imamoğlu has met with several leaders of women’s non-governmental organisations, answered questions, and discussed their past and future strategies. Recognising that the Istanbul Convention is a legally enforceable international treaty, İmamoğlu has suggested that we examine the authority of our country’s municipal governments as well. As the local administration of Istanbul, İmamoğlu’s office has condemned its cancellation and offered a willingness to consider sensible solutions in this area. Even though his powers are relatively restricted, he intends to continue the Convention’s practices in the fields that fall within his jurisdictions.

Prior to the withdrawal, through his implemented policies and actions, İmamoğlu met the provisions of the Istanbul Convention, which had been long overdue. He established the first women’s refuge shelter in Istanbul, fulfilling one of the Istanbul Convention’s stipulations, years after the treaty was signed and approved. On 25 November 2020, the Municipal Council of Istanbul, led by İmamoğlu, launched a 24-hour Women’s Support Line, which is currently available in Turkish, Kurdish, English and Arabic. Under İmamoğlu’s administration, Istanbul saw the establishment of the first Women’s Solidarity House, which provides comprehensive social services to women who are ready to enter the labour force.

During his speech on the first anniversary of his election, İmamoğlu had stated that Istanbul would be governed based on four concepts: equality, solidarity, production and freedom. Working for women’s empowerment within the framework of gender equality, the Municipal Council of Istanbul has made significant progress in eradicating gender-based discrimination, strengthening women’s influence in business, supporting women facing domestic abuse, and otherwise empowering women.

İmamoğlu’s initiatives have great impact as the mayor of Turkey’s most populated city and potentially Erdoğan’s future opponent. However, his municipality is not the only one to respond. Municipalities throughout Turkey have joined forces to express their apprehension and disapproval of President Erdoğan’s recent actions and are striving to develop new policies for women’s economic empowerment, social and political inclusion, and well-being. In response to the withdrawal, several municipalities took to their platforms to reassure the public they would continue to empower and protect women through their services, all the while underlining the unlawfulness of the decision.

Ankara and Izmir, with Mansur Yavaş and Tunç Soyer as mayors, respectively, follow Istanbul as the country’s most populated cities. Like Istanbul, municipalities are tied to the Republican People’s Party in both cities. Izmir Metropolitan Municipality leads the country in terms of numbers of female managers working in a municipality. Their success is not limited to the statistics of women working but also in terms of authority and responsibility, including the prestigious titles the managers are given. The post of deputy secretary general, one of the most powerful authorities in the municipality, is held by two females.

The municipality also recently concluded the Local Women’s Policies Workshop. With the right policies the goal is to ‘strengthen and advance Izmir’s gender-inclusive city’ paradigm to the next level. The Istanbul Convention, gender-insensitive language of the media, Local Equality Action Plans, and women’s voice cooperative management were all highlighted during the project’s presentation.

Ankara Mayor Mansur Yavaş is making a reputation in the press regarding his successful work on women’s policies. In March 2021, a smartphone application called Mor Haritam was developed and launched in cooperation with UN Women, the Swedish Embassy, and the Turkish Economic and Social Studies Foundation. The app allows women to report to the municipality areas they consider dangerous using a map. The program also offers women access to all centres of violence and support units in their local areas, as well as the ability to request assistance.

The government’s sudden withdrawal from the Istanbul Convention – coming in the middle of the night, without any legal basis – sparked widespread disquiet and alarm across the country. Now it appears that local governments will have to work harder to fill the void left by the government’s actions. As women’s organisations across Turkey assemble, many are refusing to relinquish the Convention and its explicit purpose: women’s welfare. Turkey’s ministries have failed women and victims of violence, in short, the majority of the population. The initiatives taken by Turkey’s metropolitan municipalities implement the required measures designated by the Istanbul Convention. As we strive to eradicate violence, defend and empower women, and achieve equality across all platforms, the support of prominent and influential mayors gives us hope and inspiration for the future.

3. Key Trends This section compares key trends in each of the datasets. First, it looks at the quantity and quality — i.e., scale,...
Read more
Style

Iranian commander Maj. Gen. Hassan Firouzabadi, who I must say seemed quite appropriately-named, has died of Covid-19. Which also seems appropriate, since he was...
Read more