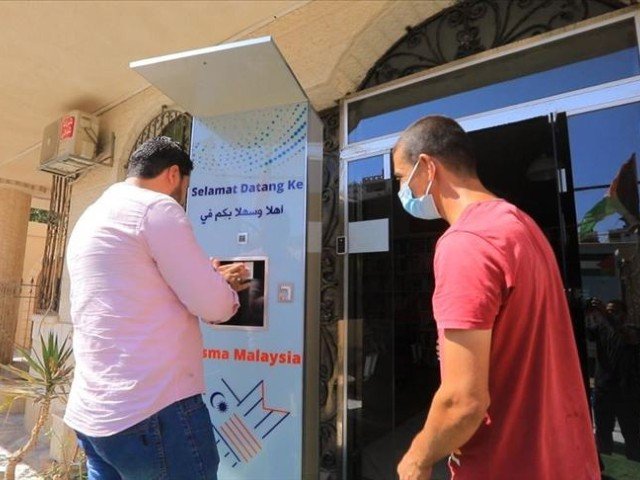 
Some large news outlets like AFP recently covered the story of a palestinian woman who invented a machine to fight the spread of covid-19.

Entering a Gaza City restaurant, customers are welcomed by a multi-tasking disinfection machine designed by a Palestinian businesswoman to curb the spread of the coronavirus in the crisis-hit enclave.

If the body temperature is too high, a red signal will light up. Otherwise the restaurant door opens automatically to allow the customer in.

“In Gaza, we have basic devices imported from abroad to measure temperatures, and others to disinfect, but our devices combine multiple technologies in one,” said creator Heba al-Hindi.

The densely-populated Palestinian coastal enclave, under an Israeli-enforced blockade since 2007, was initially largely spared by Covid-19 when the pandemic broke out.

But dire economic conditions, a poor healthcare system and chronic electricity shortages, partly caused by the blockade, made Gaza especially vulnerable to the virus.

Confirmed infections in the enclave have topped 5,440 with 31 deaths.

“When Covid-19 reached the Gaza Strip, I told myself I had to find a way to fight its spread,” said Hindi.

“Then came the idea of creating a sanitiser and I designed these smart machines.”

The 37-year-old mathematics graduate heads Innovation Makers, a company that has created eight anti-Covid products, including a blue and yellow robot-like machine to appeal to children.

She said the project makes money but that “our focus is not on the profit”.

Innovation Makers has sold dozens of machines to supermarkets, bakeries and restaurants, for between $550 and $1,500 depending on the technology used.

The products have been patented by the Ramallah-based Palestinian economy ministry, in the West Bank.

The company finds spare parts for the devices on the local market but is barred by Israel from exporting the “Made in Gaza” creations, slowing down Hindi’s ambitions.

Management at the Taboun restaurant is delighted with the disinfecting machines they bought.

“The device is remarkable,” said Matar Matar, hospitality manager at the Gaza eatery, adding that he found out about it on social media.

Customers are happy to see that “something new is being developed in Gaza,” he said.

Computer engineer Mohammad Natat, 23, said he was proud to be part of the team that created the machine.

“I had the opportunity to take part in this work and be creative in my field,” he said. “It was a huge chance to have some work.”

Around half of Gaza’s population is out of work, two thirds of them young people, according to the World Bank, and more than two thirds of residents depend on humanitarian aid.

Except something seems off. This is the photo accompanying this report of the story,

The machine has Malaysian writing on it, including the word “Malaysia”.

A reverse image search showed the “inventor” herself, Heba al-Hindi, had posted it on her Facebook page 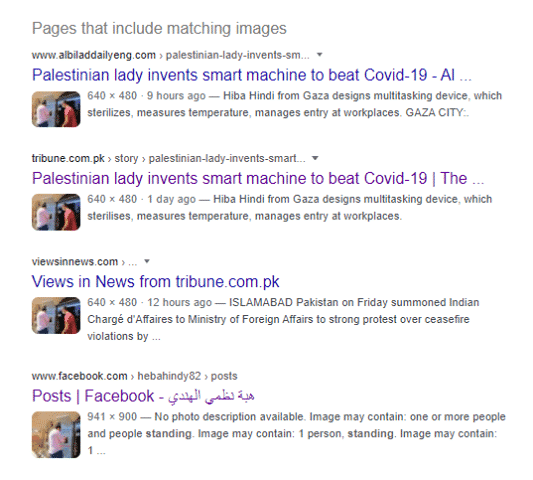 but subsequently deleted it.

A reader noticed the Malaysian writing on the photo and directly messaged Heba to get to the bottom of things. After being quizzed about it, she finally admitted she imported the machine from Malaysia 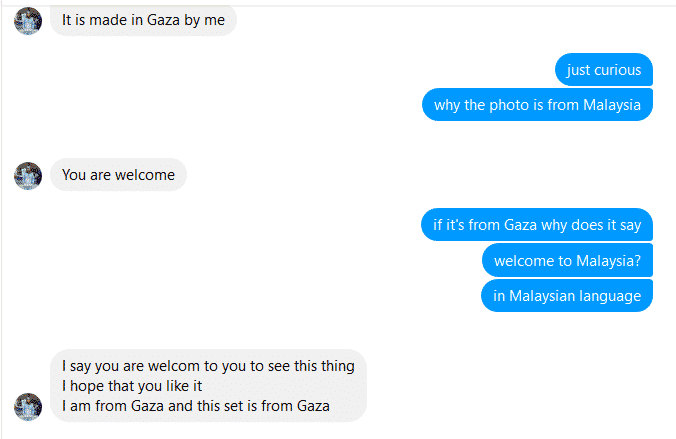 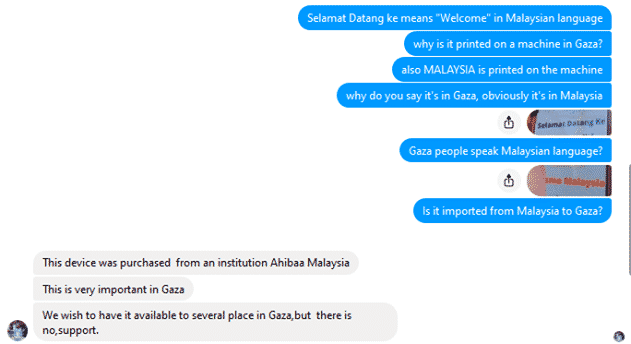 Interestingly, a person in Malaysia confirmed there is no such place as Ahibaa Malaysia.

A look at Heba’s Facebook wall reveals she imports all sorts of products.

In other words, it looks like these media outlets, in their rush to paint Gaza in a good light while taking some nice little digs at Israel, have not done their due diligence and helped spread yet another lie emanating from there.

Recommended Reading, 2020: Books From and About the Arab World