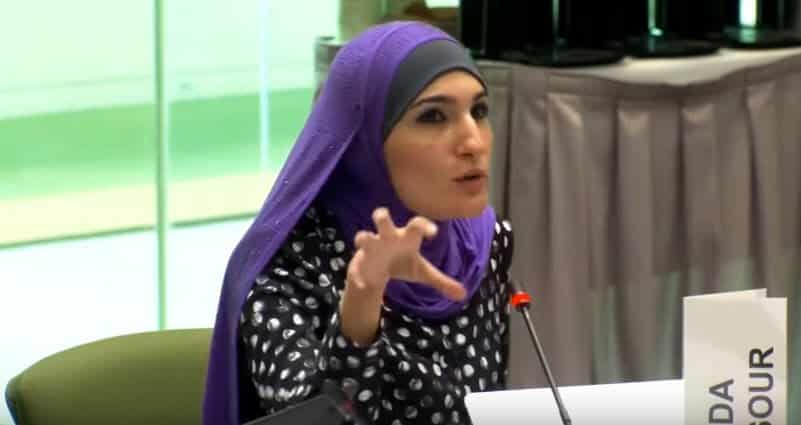 
In case you have not been following, my video upload and tweet of Michael Che’s Saturday Night Live “joke” – which was undoubtedly antisemitic in that it spread a lie about Jews – has generated an uproar. My video has been seen already 1.8 million times at the time of this post, the story is all over the mainstream media, and petitions are circulating for NBC to take action.

I was also inundated with much antisemitic abuse, which only served to reinforce to me how those who hate Israel really do have a problem with Jews.

One of the reactions I noticed came from a guy called Rafael Shimunov, who is one of Linda Sarsour’s “beards” – that is a Jew who she can hold up and say “some of my best friends are Jewish, I can’t be antisemitic!” And he did not disappoint.

Some hours later, if on queue, Sarsour decided to pipe in and once again bear her antisemitic fangs:

“That people” – she is speaking about Jews.

The joke involved blaming JEWS for only looking after JEWS, and not other minorities. This is not just a lie, but a pernicious one, and one that has generated even more hatred towards Jews everywhere.

If Sarsour was concerned about Jewish lives as she has claimed, she would have accepted the pain caused by this “satire.” At the very least, she could have shut up. Instead, she injected herself into the controversy to make clear that we deserved this treatment.

Jews like Rafael Shimunov can whine all they like about White Nationalists – whose antisemitism is indeed something we need to take seriously – but while they cozy up to other real antisemites like Linda Sarsour, they are part of the problem.

The former deputy head of Mossad has criticised Israeli Prime Minister Benjamin Netanyahu for failing to confront the Iranian nuclear threat and the...
Read more