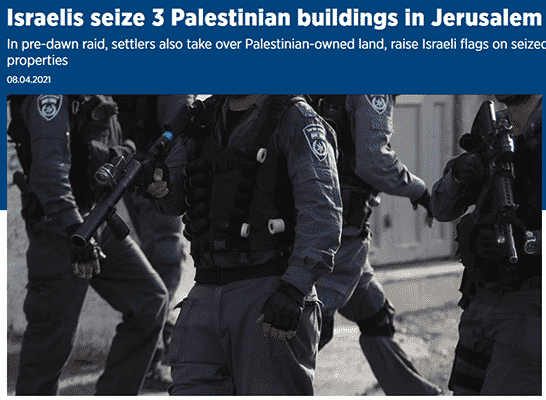 
Turkey’s Anadlou Agency has reported how “Israeli settlers seized control” of three palestinian-owned buildings and a piece of land in Silwan, East Jerusalem.

In a pre-dawn raid, Israeli settlers Thursday seized control of three Palestinian-owned buildings and a piece of land in occupied East Jerusalem.

The settlers immediately raised Israeli flags on the seized properties in the middle of the crowded Palestinian neighborhood of Silwan, south of Jerusalem’s flashpoint Al-Aqsa Mosque.

Local sources told Anadolu Agency that the Jewish Ateret Cohanim organization was behind the seizure of the properties in occupied Jerusalem.

Extremist Jewish groups such as Ateret Cohanim and Elad are active in seizing control of Palestinian properties in occupied Jerusalem with the aim of establishing a Jewish majority in Jerusalem’s neighborhoods, including the Old City.

The Jerusalem-based Wadi Hilweh Information Center said in a statement that around 100 Israeli settlers accompanied by Israeli police raided Silwan at 2.00 a.m. (Wednesday 2300GMT) and seized control of the buildings and land while the owners were absent.

The family owners have yet to comment on the settlers’ seizure of their properties.

The center said in recent years seized properties in Silwan were made into 12 properties forming settlement outposts in the Palestinian-majority neighborhood.

International law views both the West Bank and East Jerusalem as occupied territories and considers all Israeli settlement-building activity there illegal.

Israel-haters have predictably jumped on the story.

Painful and difficult to describe ..
This is how the balconies of a Palestinian house in Silwan town looked after Israeli settlers seized Palestinian homes at dawn today. pic.twitter.com/7gKQKcwTHL

An Israeli flag hoisted over a building in Silwan neighbourhood in occupied #Jerusalem after the building was taken over today by Israeli settler organisations. #Palestine #Palestinians #PalestinianLivesMatter pic.twitter.com/hgLHnUzLnL

The settlers placed Israeli flags on 15 houses in Silwan after the Ateret Cohanim organisation seized them and handed them to settler families. #FreePalestine https://t.co/TVOtE1vsEf

But the truth is something else entirely, and even Ha’aretz has reported accurately on this.

That’s right. This was a totally legal purchase.

Even some anti-Israel websites have reported this fact, but somehow tried to make it sound like it was not a legitimate transaction.

Two of the buildings belonged to the Awad family, who still live nearby and say they sold them to two Palestinian men four months ago.

The family said that they were surprised to learn that the properties had been sold secretly to Israel settlers, adding that one of the terms of the sale agreement to the two men was “to consult the Awad family about any future sale and to not sell it to Jews.”

The third residential building, also four storeys, and with a basement, belonged to a man who was not in the area when settlers arrived in the early hours of Thursday morning.

The plot of land was owned by the Abu Sbieh family, who said that it was sold to another man, according to Wadi al-Hilweh.

One of the terms of the sale agreement to the two men was “to consult the Awad family about any future sale and to not sell it to Jews.

And it extends beyond mere statements and to actual fatwas.

Sheikh Ikrimah Sabri, the preacher of al-Aqsa Mosque and former Grand Mufti of Jerusalem, announced on Thursday that any Muslim who sells land or houses to Jews will be denied burial in a Muslim cemetery.

How is this ok, yet a legal purchase not?

Why is no human rights organization condemning this actual apartheid, nor any media outlet reporting it critically?

By the way, Jews have been legally buying land off palestinian Arab landowners since the early days of “modern Zionism.”