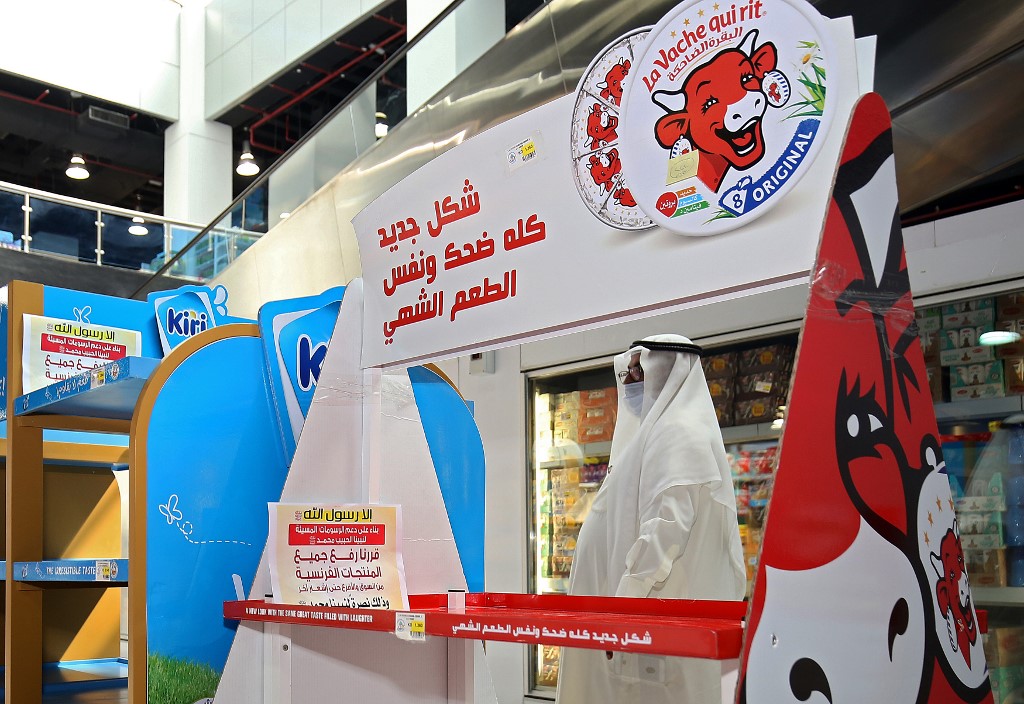 
France is facing a backlash across the Arab world over the use of cartoons depicting the Prophet Muhammad, which have prompted protests and growing calls for the boycott of French products.

About 200 people protested outside the residence of France’s ambassador to Israel on Saturday against the cartoons, while on Sunday, retail co-ops in Kuwait pulled French products from their shelves.

In Saudi Arabia, the Arab world’s largest economy, a hashtag calling for the boycott of French supermarket retailer Carrefour was the second most trending on Sunday.

France recalls ambassador from Turkey after Erdogan jibe at Macron

Macron on Wednesday said a French teacher beheaded outside his school in Paris earlier this month “was killed because Islamists want our future.”

The teacher, Samuel Paty, was murdered after he had shown cartoons of the Prophet Mohammed during a class he was leading on free speech.

On Sunday, Macron said in a tweet: “We will not give in, ever” to militants.

“We do not accept hate speech and defend reasonable debate,” the French leader added.

In Kuwait, the non-governmental Union of Consumer Co-operative Societies, which groups more than 70 establishments, issued the boycott directive on 23 October. Several co-ops visited by Reuters on Sunday had cleared the shelves of items such as hair and beauty products made by French companies.

Union head Fahd Al-Kishti told Reuters that all French products had been removed from all the co-ops in response to “repeated insults” against the Prophet and had been taken independently of Kuwait’s government.

The co-ops, some the size of hypermarkets, carry government-subsidised staples and account for a big part of retail in Kuwait, as well as organising some educational courses and recreational activities.

In Israel, hundreds of protestors demonstrated in the largely-Arab district of Jaffa in Tel Aviv, after Muslim evening prayers on Saturday.

Protesters, some of them wearing surgical face masks in keeping with coronavirus regulations, carried banners in Arabic in support of the prophet, AFP journalists at the scene said.

One of the demonstrators, Amin Bukhari, accused Macron of playing the game of “the extreme right”.

“The Prophet Mohammed is the most sacred thing in Islam and whoever attacks his honour, attacks an entire people,” he told the crowd gathered outside the official residence of French ambassador Eric Danon.

Calls for boycotts of French goods have since come from groups in Jordan, Kuwait and Qatar. Hamas, rulers of the Gaza Strip have also condemned Macron’s comments.

“Insulting religions and prophets is not a matter of freedom of expression, but rather promotes a culture of hatred,” Hamas said in a statement, warning of unspecified “consequences”.

The strong reaction has prompted the French foreign ministry to urge countries where boycott calls had been made to stop them and ensure the security of French citizens.

France-Turkey feud: ‘French anger is all about losing influence’

“Calls for a boycott are groundless and must cease immediately, as must all attacks on our country that have been manipulated by a radical minority,” a ministry statement said.

It underscored the danger posed by “calls to demonstrate against France, in terms that are sometimes heinous and spread on social media.”

The ministry insisted that France’s position was “in favour of the freedom of conscience, of expression and of religion, and a rejection of all calls that incite hatred.”

After a Danish paper first published the cartoons in 2005, protests and boycotts on Danish goods swept the Islamic world.

The beheading in a Paris suburb carried echoes of the militant attack in 2015 on the offices of satirical magazine Charlie Hebdo after it republished the cartoons.

France recalled its ambassador to Turkey on Saturday after Turkish President Tayyip Erdogan said his counterpart Emmanuel Macron, who this month declared war on “Islamist separatism”, needed mental help over his attitude towards Muslims.

Today, more than 170 Black and Jewish leaders from the entertainment industry released a unity statement to launch the Black-Jewish Entertainment Alliance, a...
Read more
Magazine

Some of Egypt’s Top Female Leading Ladies of the Silver Screen: Then and Now

Some of Egypt’s Top Female Leading Ladies of the Silver Screen: Then and Now There are some names that are absolutely never forgotten; some...
Read more