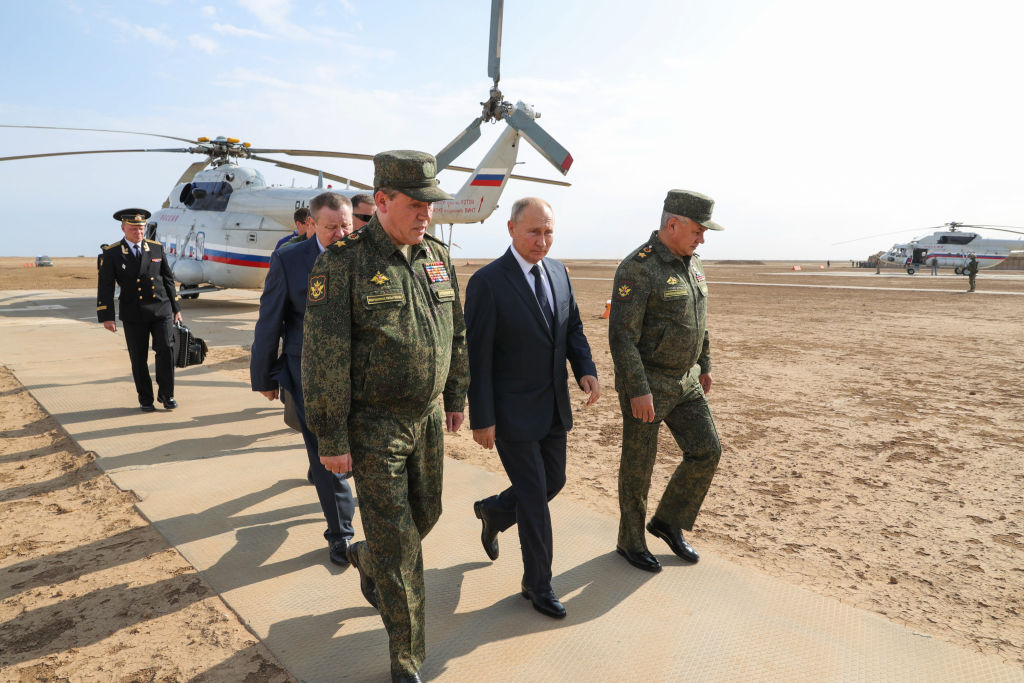 
Kavkaz 2020, the latest in Russia’s series of major military exercises, demonstrated its burgeoning military capabilities on its southern flank. Several lessons for both the region and outside observers can be drawn from the exercise, but when juxtaposed with the subsequent flare-up of hostilities between Armenia and Azerbaijan, they emphasize not just Russia’s strengths but also its limitations.

The exercise itself brought together a reported 80,000 troops, mostly Russian but also including contingents from a variety of other states including China, Armenia, Pakistan and even the pseudo-state of Abkhazia. This was Russia’s largest exercise of 2020, and followed a lengthy series of snap exercises and spot checks across the Southern Military District. Over five days of wargaming, the defenders successfully countered a ‘terrorist incursion’ backed by a hostile state and delivered a suitably devastating response by ground, air, and sea (including a cruise missile launch from a submarine of the Black Sea Fleet).

1. Moscow regards the southern flank as one in which it needs to continue both developing and demonstrating its offensive capabilities. Russia’s exercise timetable cycles through its main strategic directions, and 2020 was simply Kavkaz’s turn. However, the scale and above all the scenario of the exercise is telling, as they showcased Russian power projection assets in a way that emphasizes their potential use in the South Caucasus outside its borders.

For example, some 900 paratroopers took part in a combat drop at Kapustin Yar training ground with BMD-4M infantry combat vehicles, supported by Mi-24 and Ka-52 helicopter gunships and Mi-8AMTSh utility helicopters carrying carry D-30 122mm howitzers. Given the limitations in both the scope for opposed air-drops and also Russian heavy-lift aviation, such operations would likely take place close to its borders and perhaps also in the context of operations in which it is supporting an ally or proxy. Notably, while the main focus of Russian-Abkhaz training was joint missions defending the pseudo-state against coastal attack, there reportedly were Abkhaz observers at the Kapustin Yar grounds for this stage of the operation.

Furthermore, given the topography of the region, it was equally as significant that the specialised mountain troops of the 34th Motor Rifle Brigade undertook night-time operations at the Ashuluk training range.

2. Moscow possesses a devastating local superiority, at least in battlefield capabilities. There can be no doubt that Russian forces – even just those in-theatre, without reinforcement – have a massive local superiority over those nations in the region it continues to regard as being within its so-called ‘Near Abroad,’ its sphere of influence: Georgia, Armenia, Azerbaijan, and Moldova. This does not necessarily translate into the capacity to win any war without serious costs, let alone being able to pacify these areas long term. However, it does reflect Moscow’s goal of remaining the regional hegemon, by force if need be. It is also a reminder that generating credible defensive and deterrent capacities against Russia depends on countries adopting suitable military postures and building alliances.

The current conflict between Armenia and Azerbaijan, for example, has highlighted the extent to which the continued stand-off over Nagorno-Karabakh means that the forces of both countries have largely been structured with each other in mind, not Russia. Only Georgia has a military doctrine that explicitly addresses the threat posed by Moscow and reflects that in its force posture, procurement, and training. Kavkaz 2020 thus illustrates the extent to which countries in the region looking to counter-balance Moscow need alliances. If this is not a body such as NATO, then the scope for other would-be regional hegemons such as Iran and Turkey to gain additional traction will become all the greater.

3. Moscow’s own attempts to build partnerships are limited. Kavkaz was predictably heralded as an example of Russian defence diplomacy, and it is certainly true that there were some notable moments of international cooperation. China’s contingent made a splash by arriving in the new Y-20 transport aircraft, a first for such a mission, while notionally-neutral Turkmenistan reportedly was involved, reflecting its renewed efforts to build closer relations with Russia. However, there were also notable absences. India had originally intended to participate, but dropped out, ostensibly because of COVID-19, but rather because of its border clashes with China. Likewise, in hindsight Azerbaijan’s absence reflected its preparation for war over Nagorno-Karabakh. Turkey, increasingly emerging as Russia’s rival in the region, was originally billed as a participant before being dropped without comment.

But at its simplest, despite its historical ties and economic links (it is still Armenia’s largest trading partner, Georgia’s second, and while Azerbaijan’s main export partner is Italy, its largest share of imports come from Russia), Russia’s power in the region is essentially ‘hard’ rather than ‘soft.’ Governments cooperate with the Kremlin to a considerable degree because they wish to avoid its hostile attentions, rather than out of any particular trust or affection.

Kavkaz 2020 and the Azerbaijan-Armenia conflict

The current conflict in the region, putting Azerbaijan and its increasingly overt ally Turkey against Armenia and the autonomous, unrecognised Republic of Artsakh (RA) in Nagorno-Karabakh, illustrates many of these issues, but also highlights some of the gaps between Moscow’s aspirations and will.

There is no doubt Kavkaz 2020 demonstrated that Moscow has the capacity to decisively intervene in the conflict, should it so choose. Indeed, many of the capabilities it put on display are of direct relevance. While it is important not to overstate their significance, for example, Baku’s Turkish-made (and likely -piloted) Bayraktar TB2 drones and Israeli Harop loitering munitions have made quite an impact. Armenia’s dated and largely Soviet-legacy air defence assets have found dealing with these targets a serious challenge. In Kavkaz 2020, though, the Russians devoted considerable attention to testing and showcasing not only their own use of Forpost, Eleron-3, and Orlan-10 reconnaissance systems, but their own integrated anti-drone defences, using  Pantsir-S1 and Igla air-defence weapons as well as Borisoglebsk-2, Zhitel and Krasukha-S4 electronic warfare systems. There are reports that Krasukha systems based around Russia’s 102nd Base in Gyumri are now being used against the Turkish drones.

Furthermore, while Baku left the alliance in 1999, Erevan is a member of Moscow’s Collective Security Treaty Organisation (CSTO) and even if most of the fighting is on the territory of the RA (considered Azerbaijan’s under international law), some has spilled over into Armenia. This would appear to be an opportunity to invoke its collective security clause, and Russia not only has specialist forces close to hand but also bases from which to launch operations, including the 7th and 4th Military Base in Occupied Georgia (Abkhazia and South Ossetia respectively) and in Armenia, the base at Gyumri and the 3624th Airbase at Erebuni Airport. For all this, though, Armenian Prime Minister Nikol Pashinyan, presumably under pressure from Moscow, has not yet turned to the CSTO, even as Armenian losses mount.

It is clear that Moscow is reluctant to take sides: it would rather keep the old status quo, balancing the two combatants. At a recent Valdai Discussion Club event, President Vladimir Putin was almost painfully even-handed, saying “Russia has always had special relations with Armenia. But we have also always had special ties with Azerbaijan as well.” After all, the Kremlin also seems unwilling or unable to recognise new realities on the ground, most notably the increasing role and assertiveness of Turkey. It did turn to mediation efforts, but its efforts to broker a ceasefire have repeatedly failed, and although there has been a slight tilt towards Armenia, and attacks on Turkish proxies in Syria signalled a warning, Moscow has been uncharacteristically hesitant.

It seems clear that Moscow’s problem is not a lack of capacity but of will. Turkey is acting more overtly aggressive, and to put it at its most basic, President Recep Tayyip Erdogan is ‘out-Putining’ Putin. Whereas Russia has long played on its image as the risk-taking adventurer, in fact this is often a pose, as it carefully assesses the likely dangers and fears it is a power in decline. When a leader such as Erdogan challenges assumptions about Moscow’s willingness to defend its claim to hegemony, and pushes his ally Azerbaijani President Ilham Aliyev to act on that basis, the limitations of Putin’s strategy become clear.

This hardly means Russia is irrelevant in the region, of course. This is especially true not just because of its economic role, but also its array of other assets, overt and covert, from potential other conflicts to inflame, to its networks of allies, assets, spies and proxies.

However, it does demonstrate that the situation in the South Caucasus is a great deal more complex than sometimes assumed. If Kavkaz 2020 showed Russia’s strengths, then the Armenia-Azerbaijan war shows its limitations: that it is not always easy to convert military capacity into political authority. This should be encouraging for both the countries of the region and Western nations eager to help them attain full sovereignty. While Moscow’s strength cannot be ignored, nor too should it paralyse people into thinking it cannot be challenged and deterred.

Mark Galeotti is a non-resident scholar with MEI’s Frontier Europe Initiative and a specialist on Russian politics and security affairs. He is an Honorary Professor at UCL SSEES, Senior Associate Fellow at RUSI, and a Senior Non-Resident Fellow at the Institute of International Relations Prague. The views expressed here are his own.