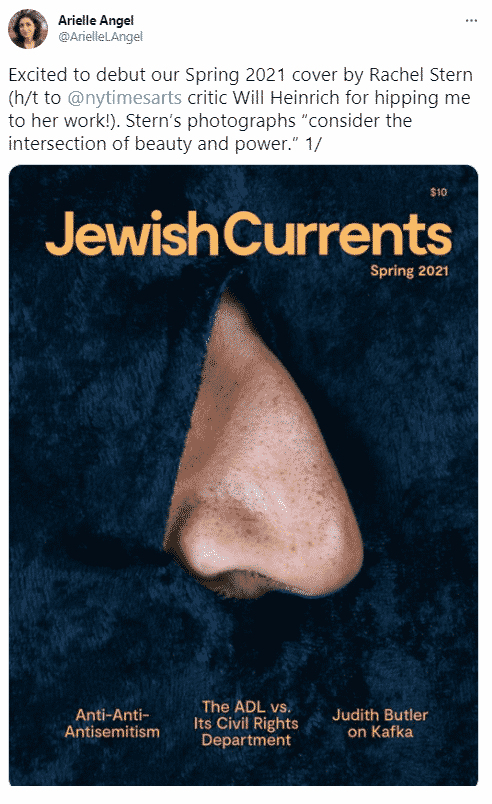 And in case your initial reaction is, like mine, “WTF?”, allow Angel to explain the “rationale.”

Yeah, I am still going “WTF?”; I think what she is saying is this is an attempt to “reclaim” the Jewish nose from the antisemites. Or something.

Why not just have a cover depicting a bearded guy with long nose, beady eyes, and holding bags of money? (think this scene from Borat 2)

But it gets better. And by better I mean worse.

This nose is not even attached to an actual Jew.

So let’s get this straight. These nincompoops oppose Jews reclaiming their indigenous homelands, and would rather we reclaim…our noses? But not really our noses; rather the nose of a non-Jew that supposedly looks like a “Jewish nose.” Which they admit is an antisemitic trope to begin with.

No wonder they also oppose the IHRA working definition of antisemitism – they likely fall foul of it in multiple ways!

Now imagine if someone tried a similar thing with a different race or nationality, say African Americans. Except they used a white person in Black Face. There would be an uproar, and rightly so.

This is yet another example of the ridiculous lengths some Jews on the Left go to in order to ingratiate themselves to non-Jewish society. It truly stinks.

Songs From Palestine: A Meaningful Addition to Arabic Language Teaching

The Riyadh Agreement: Yemen’s new cabinet and what remains to be done