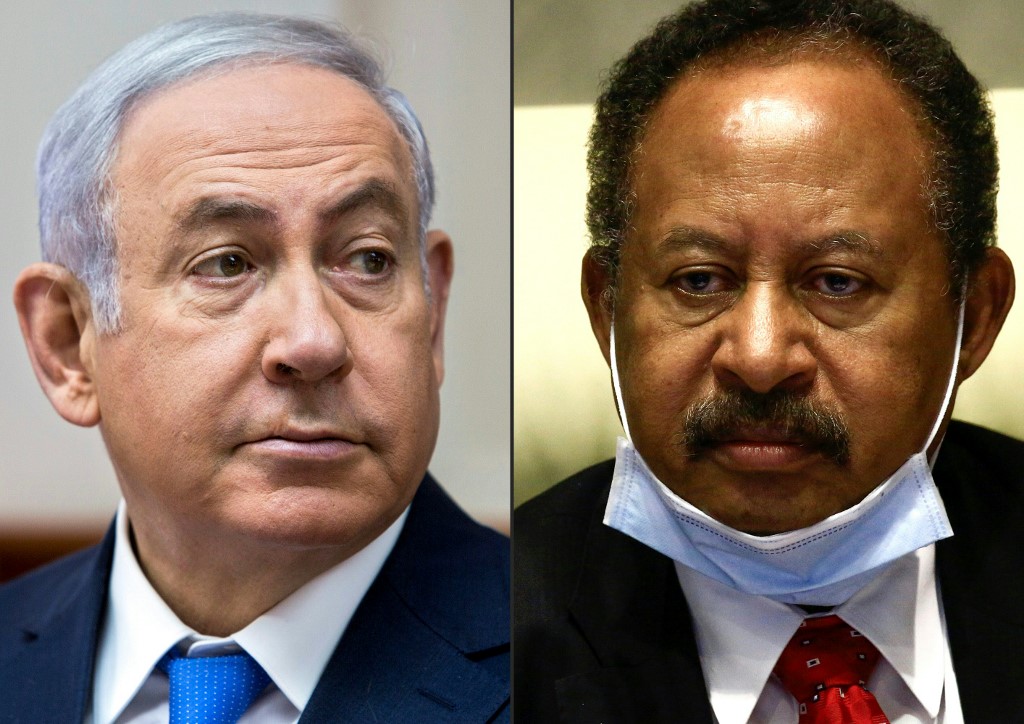 
Sudan on Friday become the third Arab country to normalise ties with Israel this year, following in the footsteps of its Gulf allies the United Arab Emirates and Bahrain and creating huge splits among Sudan’s political class and its people.

Announcement of the normalisation came after Washington had removed Khartoum from the State Department’s State Sponsors of Terrorism (SST) list, imposed under the rule of the deposed president Omar Al-Bashir.

The agreement had been sealed in a phone call between US President Donald Trump and Israeli Prime Minister Benjamin Netanyahu, Sudanese Prime Minister Abdalla Hamdok, and the chairman of Sudan’s transitional Sovereignty Council, Abdel Fattah al-Burhan, senior US officials said.

It had been speculated that Sudan could make a deal with Israel in exchange for removal from the US terror designation and the major boost for the struggling Sudanese economy from US financial aid that would follow. However, Trump on Monday had said that Khartoum’s removal would take place in exchange for a $335m payment to “US terror victims and families”.

In a post to Twitter, the Sovereignty Council said the SST delisting marked “a historic day for Sudan and its glorious revolution”. It did not immediately comment on its diplomatic agreement with Israel.

Netanyahu welcomed the agreement with Sudan and what he called a rapidly expanding “circle of peace” and the start of a “new era”.

Anger on the streets

On the streets of Khartoum, reactions were not quite as positive.

Nazar Ahmed, 23, a member of the revolutionary committee in the city’s Elgiraif district, told Middle East Eye that the conditions laid down by the US were “humiliating to the Sudanese revolutionists and the acceptance of Sudan’s government was shameful”.

Meanwhile, Hiba Osman, 21, from Khartoum, told MEE: “We have to look to the countries that normalised its ties with Israel and what benefits they got. Normalisation with Israel is a big illusion sold by Trump to our government.”

Speaking in Ramallah in the occupied West Bank, Palestine Liberation Organisation official Wasel Abu Youssef said that the decision “will not shake the Palestinians’ faith in their cause and in continuing their struggle”.

“Sudan’s joining others who normalised ties with the state of the Israeli occupation represents a new stab in the back of the Palestinian people and a betrayal of the just Palestinian cause,” he said.

Khartoum, meanwhile, insisted that the deal was still provisional and needed the approval of the country’s transitional parliament, led by Burhan.

According to a joint statement issued after a conference call between Trump, Netanyahu, Hamdok and Burhan, Israel and Sudan would focus on trade relations, led by the agricultural sector. “The leaders agreed to the normalisation of relations between Sudan and Israel and to end the state of belligerence between their nations,” the statement read.

“The leaders agreed to begin economic and trade relations, with an initial focus on agriculture. The leaders also agreed that delegations would meet in the coming weeks to negotiate agreements of cooperation in those areas as well as in agriculture technology, aviation, migration issues and other areas for the benefit of the two peoples.”

The statement also outlined other incentives that had been offered to Khartoum in order to encourage it to sign the deal, with a report disclosing that Washington would pay $750m to Sudan to help salvage its collapsed economy and that aid packages would be provided for two years, including fuel, wheat and medicines.

“The United States will take steps to restore Sudan’s sovereign immunity and to engage its international partners to reduce Sudan’s debt burdens… The United States and Israel also commit to working with their partners to support the people of Sudan in strengthening their democracy, improving food security, countering terrorism and extremism and tapping into their economic potential.”

The normalisation agreement sparked fury on social media in Sudan. Israel-Sudan normalisation: How the world reacted

Omar Sidahmad, a Sudanese activist, said the deal would strengthen the military’s role in politics.

“This is not normalisation, but rather an increase in the military junta’s grip on executive power and a complete elimination of the civil state,” he wrote on Facebook.

Mohamed Mahmoud, another activist, said the announcement of the deal with Israel was “tantamount to a declaration of war on the core value of all Sudanese revolutions, namely fighting the occupiers and invaders”.

Sudan’s political parties and academics have been bitterly divided over the normalisation move.

‘Unless the government revises its position of normalisation with Israel, we will withdraw our political support for it’

– Statement from the National Umma Party

The NUP, led by former prime minister Sadiq al-Mahdi, threatened to stand against Hamdok’s government, saying that “unless the government revises its position of normalisation with Israel, we will withdraw our political support for it”.

Sudanese scholar Suliman Baldo supported the move, saying that the Sudanese people had a right to be welcomed back into the international community.

“They have been eagerly waiting for this moment following a peaceful mass movement that ousted the brutal Bashir regime,” he said.

“The Sudanese people… suffered from the deposed regime’s violent extremist actions that landed their nation on the US terror list. A democratic Sudan could be a bulwark of international peace and security in the region.”

Magdi el-Gizouli , an academic at the Rift Valley Institute, strongly denounced the move.

“Khartoum has given a free gift to Trump in his election race, and it is a setback from Sudan’s historical position of the ‘three noes’ from [the Khartoum resolution of] 1967 [‘no peace with Israel, no recognition of Israel, no negotiations with it’],” he said.