In Defense of Gina Carano 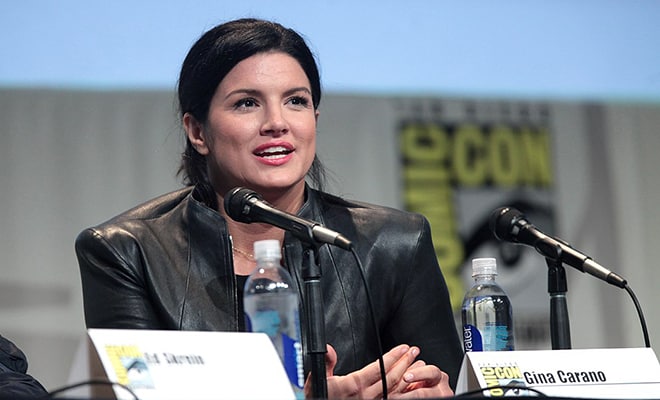 
One of my favorite shows of recent times has been The Mandelorian, which I believe has given Star Wars fans a new hope after years of mediocre and even poor movies.

But this post is not about Star Wars or The Mandelorian. It is about actress Gina Carano, who was fired from it.

Actress Gina Carano was swiftly fired from the hit Disney+ series The Mandalorian on Wednesday night after she reshared a post that seemed to suggest having a differing political view in 2021 was similar to being Jewish during the Holocaust.

“Gina Carano is not currently employed by Lucasfilm and there are no plans for her to be in the future,” the production company said in a statement. “Nevertheless, her social media posts denigrating people based on their cultural and religious identities are abhorrent and unacceptable.”

The Daily Beast has also exclusively learned that Carano was dropped by her publicists at ID in fall of 2020 due to her social media activity.

The popular Star Wars franchise had finished season 2 and Carano’s character Cara Dune seemed poised for a return in some form. She had reportedly recently apologized in private to Disney for her posts in hopes that she could land her own spinoff series, reported We Got This Covered.

Earlier in the day, fans took to social media to call for the former MMA fighter, who often shares controversial takes on her social media, to be axed.

Carano had gone on a reposting spree, sharing memes that made fun of the mask mandate in California, compared former President Donald Trump’s second impeachment trial to Groundhog Day, and claimed Jeffrey Epstein didn’t kill himself.

But in arguably her most offensive post yet, Carano reshared to her Instagram story a photo of a Jewish woman in her undergarments screaming as she ran away from men and young boys armed with clubs. The famed image is from 1941 during the Lviv pogroms, where Jewish men and women were massacred by their own neighbors in modern-day Ukraine due to German influence in the area.

Jews were beaten in the streets, not by Nazi soldiers but by their neighbors…even by children,” the post, which originated elsewhere, read. “Because history is edited, most people today don’t realize that to get to the point where Nazi soldiers could easily round up thousands of Jews, the government first made their own neighbors hate them simply for being Jews. How is that any different from hating someone for their political views?”

It did not go over well, and Carano was quickly accused of amplifying anti-Semitic messages.

“This is f–king vile and unnecessary,” a tweet read. “Gina carano needs to be held accountable. the oppression my people have faced because of our religion and ethnicity is NOT the same as political disagreements.”

as a jewish person, this is fucking vile and unnecessary. gina carano needs to be held accountable. the oppression my people have faced because of our religion and ethnicity is NOT the same as political disagreements. pic.twitter.com/ABuM8kO5hM

“The level of cognitive dissonance is appalling,” another added. Many of the tweets included the hashtag #FireGinaCarano and tagged the accounts for Disney, Star Wars, and Lucasfilm.

As backlash grew online, Carano quietly deleted the offensive posts from her Instagram story and began furiously liking tweets that applauded how she “counters all of the social media negativity with such grace.” Many of the praise-worthy tweets used the hashtag #istandwithginacarano and #weloveginacarano.

Representatives for Carano did not respond to The Daily Beast’s request for comment by the time of publication.

But Carano has been down this road before.

She was previously accused of being transphobic when she updated her Twitter bio in apparent mocking of pronouns to say “beep/bop/boop.” She later apologized and said she was educated by her co-star Pedro Pascal, who recently publicly praised his sister for coming out as transgender.

“He helped me understand why people were putting them in their bios,” Carano wrote. “I didn’t know before but I do now. I won’t be putting them in my bio but good for all you who choose to.”

She also encouraged people to follow her on the app Parler, which had been embraced by right-wing groups and where many broadcast the siege on the Capitol in January. Over the summer, the actress also pushed QAnon, coronavirus, and Pizzagate conspiracies.

She attempted to explain her hot takes to the right-wing news outlet The Federalist on its radio show in January.

“The whole reason I started speaking out is because I feel like there is a large group of people that were being silenced this year and being forced to play this game of wokeism or whatever it is,” she said. “No matter who you voted for, no matter who you are, I want to create a platform where everybody can have an opportunity. Everybody.”

“As a Jewish person” – a proud observant Jew living in the Jewish homeland and who observes Judaism and does not just use my Judaism as a prop, or the words “as a Jew” to silence people – I am sickened by the cancel culture we find ourselves in.

Am I fully comfortable with Gina’s comparison between Jewish treatment at the hands of the Nazis and the treatment of people with differing political beliefs by their political opponents? No.

Do I believe Gina is antisemitic? No.

Do I believe people should be wearing masks? Yes.

Do I believe there was voter fraud in the US elections? Yes.

Do I believe the extent of it would have changed the final result? No.

Do I believe Gina should have lost her job over expressing any of these views? No.

Judging by her Nazi comparison post, there is no indication Gina is a Jew-hater. I do not believe she intended to trivialize the Holocaust. And she makes a valid point, namely that the Nazis slowly got regular people to treat the Jew as the other.

We are all familiar with Pastor Niemoller’s famous poem:

First they came for the socialists, and I did not speak out—
Because I was not a socialist.

Then they came for the Jews, and I did not speak out—
Because I was not a Jew.

Then they came for me—and there was no one left to speak for me.

Gina’s post is expressing similar sentiments. She is speaking about the slippery slope towards genocide.

The reason I am not comfortable with the comparison is I don’t think one can compare the treatment of Jews at the hands of the Nazis – which actually resulted in genocide – with the Salem-witch-trials-like targeting of people with non-PC views we are seeing now. The level of vitriol that led to the Holocaust is way beyond anything we are seeing now against political adversaries. Plus the Holocaust did not occur in a vacuum, but after centuries of entrenched antisemitism.

Another reason is that there are plenty of people among the QAnon, coronavirus, and Pizzagate conspiracy people who are antisemitic and do intend to trivialize and deny the Holocaust. By making the comparison, Gina risked being painted as an antisemite, which of course has happened.

One of the reasons I disliked most of the Disney Star Wars movies was they seemed infected by Wokeism (as opposed to Wookie-ism). As my friend Johnny elegantly wrote for a Hebrew news outlet:

Apart from being cinematically mediocre and disappointing for Star Wars fans, a new tier has been added to them that was not previously known: “Disney Effect”. In short, Disney has apparently become accustomed to playing the role of the “educator” of many generations of their main target audience – young children – and this self-perception seems to have permeated both youth and adult films. Thus, Disney Star Wars films, like its other films, were soon filled with so-called important value messages, which in addition to their dubious content were often conveyed with irrationality, simplicity, and condescension. Most of them are fashionable messages that represent and clearly represent the progressive-left-wing day-to-day conversation with which many film writers and film critics seem to identify.

Perhaps this could have been understood in the context of children’s films, which play a more significant educational role and are intended for a less sophisticated target audience, although even in them the content of the messages may bother many parents.

In the Last Jedi we have been able to find a particularly painful manifestation of this phenomenon. Scattered throughout the film are so-called value messages of a moral and patronizing nature that were conveyed in a transparent and shallow “feeding spoon.” The feeling of preaching could not be avoided, and only the hashtags were missing to complete the experience. Among the issues that stood out: animal rights, wealth and inequality disparities, military industry corruption, gender roles and gender hierarchies, multiculturalism, and more. It is not clear whether all of these caused severe flaws in the plot and disregard for the spirit of Star Wars or whether they only existed alongside them. Many mourned the end of the Star Wars saga that was sacrificed on the altar of Hollywood ideological propaganda.

Then came the Mandalorian…the Mandalorian series is almost completely free from preaching fashionable messages. Morality is completely gone. Of course, the series deals – as in the way of Star Wars – with the struggle between good and evil, human nature and the free choice of which side to belong to. But it does so with refinement, elegance, and often in a way that is truly secondary to the main characteristics of the series: its quality and adherence to the Star Wars tradition.

Alas, with Gina’s firing, it seems even the Mandelorian has become infected.

Re: Lina Al-Hathloul: ‘My sister lives in Hell every day’ – Middle East Monitor