How a Leftist Antisemite Made Me Rethink the Left 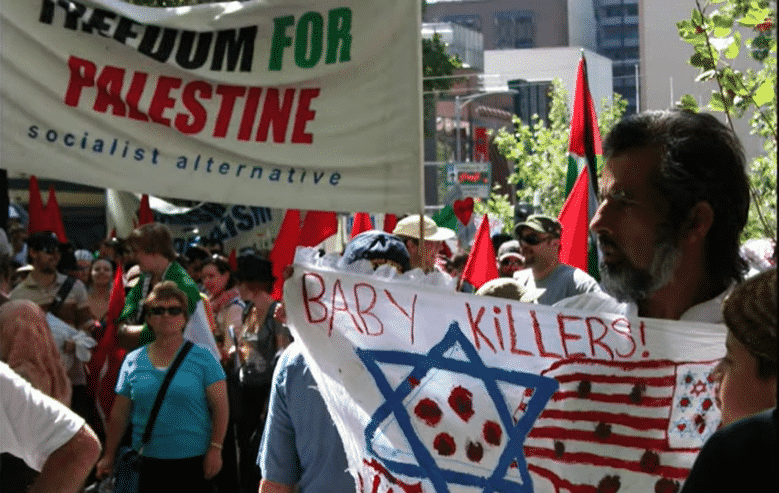 
I suffer from a nearly decade-long obsession with the Arab-Israeli conflict and the larger topic of antisemitism. It started improbably, when I registered at a language exchange website to find someone with whom to practice Spanish. Alas, instead of acquiring flawless Spanish, my almost two years of conversation with Maria of Bilbao, Spain, had the aforementioned effect.

Let me qualify: Although Maria, a self-described ex-Catholic atheist and leftist, would have tested positive for antisemitism based on the ADL’s questionnaire (“Do Jews have too much power”? “Do Jews talk too much about the Holocaust” “Are Jews more loyal to Israel?” etc.), she would have been mortified and horrified at the label.

I too am uncomfortable using this label for her. She is a lovely person, and I can say with no irony that but for the antisemitism, I thoroughly enjoyed knowing her. We sang, joked, dissed men, talked cooking disasters. Maria was fun!

When I met her (via Skype, that is) back in 2011, I was largely of Maria’s mindset: a rather solid leftist. I had no more contemplated a different political affiliation than a different religion. After all, conservatives in the U.S. were uncaring, militaristic, materialistic, uncultured, and intolerant. Only gradually would I grasp that this false generalization was just one of many falsehoods ingrained in the leftist mind. (Note: In this post I do not distinguish shades of leftists; their commonality exceeds relevant differences here.)

The first crack came when Maria expressed disgust at seeing Spanish officials kowtow to critics of the newly published poem by German writer Gunter Grass. She felt his poem “What Must Be Said” did simply that: tell the world that Israel was poised to commit a genocide of Iranians if Germany continued selling arms to the Jewish State. I was ill-informed about matters Israeli at the time, yet this didn’t sit quite right. Were Zionists truly that callous and mad?

Other divergences would follow: Maria’s assertion that Israel’s democracy only applied to Jews. Or that the Holocaust was being kept in the public eye by “powers in the shadows” whose aim was to distract from Israel’s crimes against the Palestinians. (Yet, Maria is a decent antisemite; on a later occasion she expressed sorrow “beyond words” at the Holocaust.)

I did confront Maria, stressful as it was. Naively, I initially sent her some links I’d discovered (turns you can find the pro-Israel viewpoint if you look) thinking “we’ll clear this right up.” I now know that that’s not how things work.

I also informed Maria that I was Jewish, which seemed to give her pause, but didn’t drive her off, the way it might have a right wing-nut antisemite (an intriguing distinction). Our warm conversations continued as before, still ending at times with blown kisses, Latina-style.

But then came the email in which Maria alerted me to a new way in which my people were up to no good: the “Jewish Lobby” was controlling Europe’s media. She even attached “evidence,” a lengthy tract from the University of Navarra, which is Opus Dei affiliated. It actually contained little on the topic; just the two buried items I was intended to see. First, the study’s assertion of a “Jewish Looby[sic],” right there in print. (Note: “lobby” to many Europeans is not a legal entity, but a Protocols of the Elders of Zion type cabal.) Then, to clinch it, there was a reference to the barrage of letters sent by the “Jewish[sic] Embassy” in Spain to media outlets in order to impose its views. Letters! The horror!

After the “Looby” broadside, I broke with Maria via a long but amicable (relatively) email that addressed her misconceptions and inconsistencies (for example, for all its “Jewish control,” the major Spanish paper El Pais prints antisemitic cartoons like this one, in which Sidelocks-Jew explains that Israel pays good money to get a pass on its crimes). I am aware that there are other Jewish people who in my position would have warmed to Maria’s anti-“Zionist” outlook, only stopping short of the lobby charge (maybe). With tiny exception, I have discovered that these are committed leftists (more on this later). And though it would be years before I would formally reassess my own identification with the left, I could at least see that with respect to the Mideast conflict, I was not “processing the data” – I will put it this way – in like manner to Maria and many Jews.

The moment of realizing that the larger problem for me was the left and not just anti-“Zionists” came only within the past year, after reading The Vision of the Anointed: Self-Congratulation as a Basis for Social Policy by Thomas Sowell (the “anointed” are leftists). The book had this effect precisely because Sowell does not mention Israel or Zionism at all, yet with every leftist position he does dissect – whether on crime or homelessness or even map-making – the same maddening pattern I had seen with “pro-Palestinians” was on full display. (I use “pro-Palestinian” in quotes because such activists don’t express concern about Palestinians in Syria, Lebanon, or even Palestinians oppressed by Abbas and Hamas.) Here are just a few of the themes that jumped out:

– “The Irrelevance of Evidence,” to which a whole chapter is dedicated. One need go no further than the leftist accusation that Israel wants war despite its multiple offers of statehood to Palestinians, always rejected.

– Liberals “tend to see evils more localized in particular ‘oppressors’ of one sort or another” (p. 117). Few would argue that the “oppressor” model has no bearing on the Mideast, but seeing the conflict exclusively through this lens means that history, motives, events, and a realistic route to peace all get distorted.

– “…one of the high priorities of [the left] is to destroy the myths and illusions which they presume to abound among the public” (p. 121). Accordingly, we learn that Israel’s democracy is an “illusion”; its founding, a “myth”; Jews aren’t Jews, or if they are, they’re not the Jews; Jesus was really Palestinian; and on and on.

– The left believes in “solutions” rather than “trade-offs.” Which leftist isn’t convinced that ending the occupation is the “solution” to regional, if not world, peace?

– The left uses “buzzwords” to “preempt issues rather than debate them.” Think “colonizer,” “apartheid,” “genocide,” or “Free Palestine!” among others.

– The left casts those who disagree “as being not merely in error, but in sin” (p. 3). Zionist “sin” is axiomatic, including “original sin.”

– There is a “willingness – or even eagerness – to read malign intentions into others” (p. 146). Can you think of an occasion when this one is not in play for Zionists? How about the remarkable charge that Israel’s separation barrier, built after terrorist attacks, is really a ploy to oppress Palestinians and grab land?

– Finally, my favorite: the left shows “pitiless ferocity toward some” (Jewish Zionists!) and “boundless indulgence toward others” (the Palestinians!) (p. 151, citation of Jean-Francois Revel)

It’s a sad day for map-makers when they are at the receiving end of pitiless ferocity just because equatorial Third World countries look too small in 2D compared to “imperialist Europe.” But it’s a potentially lethal day for Jews when Zionists are the target of pitiless ferocity and accusations of sin, as they have been now for decades from the entire world. Do leftists not know that their oh-so-righteous rage is a pitch-perfect re-play of the raw Jew-hate that has been on display for millennia, culminating regularly in massacres? Do they not care? Shouldn’t this alone sound alarm bells regarding the left?

To be clear, I have experienced overt antisemitism in my life. That is why the left-wing anti-“Zionist” variety is so head-trippy. It means you deplore antisemitism – often sincerely – yet, you fixate on Israel alone, regardless where you live. (Maria once assured me she knew no antisemites and didn’t think Spain had them.) It also means that for all the facts and ideas on offer, the only ones you buy are those “proving” that Zionist Jews (no one cares about Zionist Christians) are bad and must be righteously “resisted.” Hence Maria’s belief in a global Jewish (Zionist? So confusing!) grip on media, with only a dubious report of letter-writing for evidence. (Why Jewish power would be inherently bad in any case never seems to need explaining. Aspirin is powerful; is it bad?) And don’t you know, after Maria had weighed in about Israel’s fake democracy, Holocaust shenanigans , etc., she asked me if I had ever experienced antisemitism.

I am aware that back when I was an unquestioning leftist, Sowell’s arguments probably would not have moved me. Even though my political identity was something acculturated rather than thoughtfully chosen, I “knew” I was on the side of the good; standing against retrograde, oppressive forces. But my disturbing experience with Maria, followed by years of outrage at “pro-Palestinian” lies and ugliness, primed me to reassess the left. I will not go so far as to say that leftist views lend themselves to antisemitism (Marx’s antisemitism notwithstanding), though political historians may argue the point. But to the extent that the left presents itself as protector against wealthy, powerful, malign influences it’s easy to see how classic antisemitic tropes could mesh with leftist views in the naïve brain. To be sure, none of this is to deny the reality of right-wing antisemitism.

Post-Sowell, I am also prepared to say that my co-religionists who bash Israel “as a Jew” are not in fact speaking as Jews, but as leftists. Leftism is their true religion. Judaism does not prescribe cancelling those who disagree, or demonizing them, or posturing as morally superior, nor any type of “righteous, redemptive hate.” Leftism does.

Today’s heated pre-election climate in the U.S. is likely what has stirred me to write this post now, after so many years. But my purpose is catharsis; not adding to the sparks. I still move primarily among leftists, and sometimes their “pitiless ferocity” does flow. I generally keep mum because I respect them as people and know where they’re coming from. Plus, I’ve learned that religious fervor doesn’t yield to talking points. But who knows, perhaps one day they too will have a jarring encounter that will lead to a new outlook.