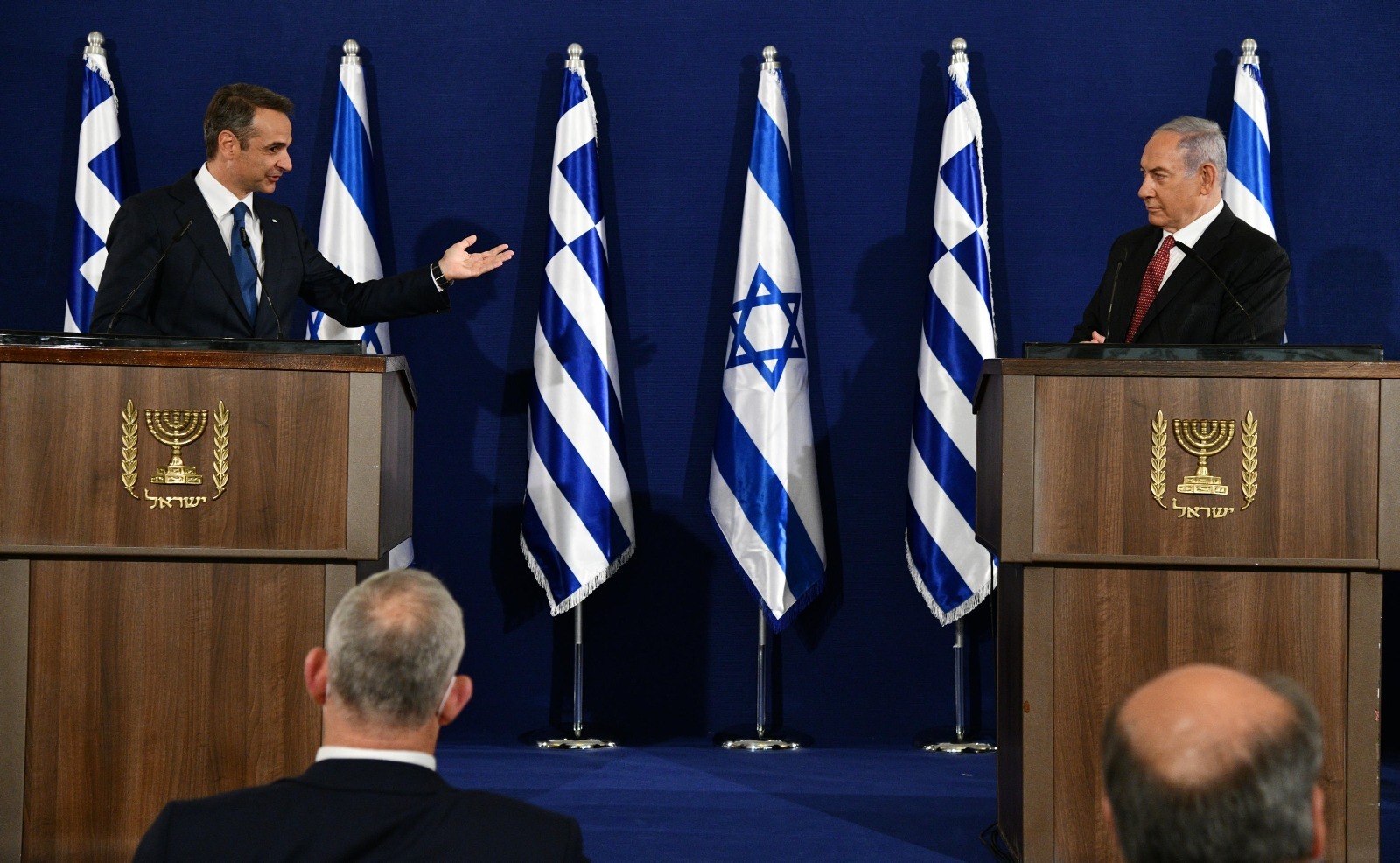 
In March 2021, the Eastern Mediterranean Gas Forum held its first meeting as a recognized international organization. Delegations from member countries – including Cyprus, Egypt, Greece, Israel, Italy, Jordan, and Palestine – gathered in Cairo to organize a regional gas market. The forum is a unique space that offers a platform for dialogue between European and Middle Eastern countries. Furthermore, it is rare that Israeli and Palestinian delegations cooperate on the international stage. Yet, as the inaugural meeting demonstrated, the conflict is never too far away. When the delegates voted on whether to grant the United Arab Emirates observer status in the forum – a privilege given to the United States and European Union – Palestine vetoed, a clear demonstration of Ramallah’s frustration with the normalization process that started a few months ago.

Greece and Cyprus fill important roles in the gas forum, and over the last decade have strengthened their strategic relationship with Israel. If the Biden administration is intent on advancing a multilateral approach towards in international affairs, then it is worth examining how these two countries can support efforts to improve Israeli-Palestinian communication in advance of future direct negotiations.

The current policies of Greece and Cyprus on Israeli-Palestinian affairs are understandably nuanced. Both countries regularly engage with the Palestine Authority and are committed to the official positions of the EU (e.g., support for a two-state solution along the 1967 borders and opposition to unilateral Israeli measures such as settlement construction and annexation). Neither country, however, is a leading voice within the EU on this issue and Israel has relied on each of them – along with members of the Visegrad Group (Czech Republic, Hungary, Poland, Slovakia) – to soften (and sometimes block) European reactions to its policies in the West Bank and Gaza Strip. In 2015, for example, Greece defied European labeling policies on goods manufactured by Israeli companies in the West Bank. Despite PA efforts to convince Greece to take an official stance against Israel’s annexation ambitions in the summer of 2020, Greek Prime Minister Kyriakos Mitsotakis did not publicly reference the matter during his visit to Israel in mid-June, focusing instead on other aspects of the bilateral relationship.

Greece and Cyprus do not require instruction from Israel to keep their distance from the conflict. Embroiled in their own ongoing disputes with Turkey in the Eastern Mediterranean and on the divided island of Cyprus, both countries prefer to not meddle in the affairs of Israel. This approach should not be confused with a lack of interest. At an official level, Greece and Cyprus want to see a resolution of the Israeli-Palestinian conflict. The Greek Orthodox Church remains a principal religious institution and landowner in Israel and the Palestinian territories. Both countries enjoy robust commercial and strategic relations with Arab countries in the region.

Still, the importance of the strategic relationship with Israel has compelled Greece and Cyprus to take a back seat on Israeli-Palestinian affairs. Bilateral trade with the Palestinians – which was never robust – has decreased over the past two decades. PA officials now reference their strong ties with Athens and Nicosia in the past tense. Other regional players, such as Egypt, Jordan, UAE, Turkey, and Qatar play a more central role in intra-Palestinian politics and delivering messages between various Palestinian factions and Israel.

The recent news about potential Gaza Strip projects  suggests that Greece and Cyprus could play a constructive role in regional energy cooperation and Palestinian participation in the EMGF. The forum includes both Israeli and PA representation, a rare phenomenon considering the current nadir in Israeli-Palestinian relations. Energy security is a serious matter for Palestinians – especially in the Gaza Strip, where electricity shortages are commonplace – and initiatives that improve reliability and affordability of supply would help stabilize the Palestinian economy and raise the quality of life. As mentioned above, there is already momentum in this space, so Greece and Cyprus would not be taking bold positions by offering to play a facilitating role on energy-related matters that come up in the forum, encouraging foreign companies to look into supporting the development of Gaza Marine field, and making sure that their Palestinian counterparts feel heard. The current mission of the EMGF focuses solely on energy issues, but its mission is likely to expand with time. It is increasingly obvious that Eastern Mediterranean states need to be in dialogue on a litany of topics, both economic and environmental, and this is an area where Greece and Cyprus could ensure a Palestinian presence.

Second, Cyprus could play a role in supporting the reopening of the Gaza Strip. Gaza remains under a strict blockade – facilitated both by Israel and Egypt – and the humanitarian conditions remain dire. Israel’s restrictive list of banned import/export goods hampers economic growth and is easy fodder for anti-Israel criticism in the international community. There is some evidence that Israel wants to change that. In February 2021, Qatar announced that it – along with the Office of the Quartet – had successfully negotiated an agreement with the Israeli government and Delek Group to construct a pipeline between one of Israel’s natural gas fields and the Gaza Strip. Just a few days later, Egypt agreed to help develop the Gaza Marine field, a natural gas reserve located just off the coast.

As recently as 2018, Israel and Cyprus were in discussions about establishing a floating dock in Limassol to receive and monitor goods bound for the Gaza Strip. The concept of the floating dock was a creative one, but the conditions – that Hamas return Israeli civilians Avera Mengistu and Hisham al-Sayed and the remains of two IDF soldiers killed in the 2014 war – were a nonstarter.

Despite promising proposals, the economic and humanitarian circumstances in the Gaza Strip remain the same (if not worse). The  floating dock may, however, be worth reviewing once more in light of recent announcements by Qatar and Egypt. A port solution would benefit all parties and should be delinked from the broader political process with the Palestinians. This would require significant coordination between Israel, Cyprus, and the PA, as well as other international actors like Egypt, the EU, and the U.S. If the project was revived under new U.S. and EU leadership, this would be a feasible, low-cost way to reduce Gaza’s isolation.

As member states of the EU and the Union for the Mediterranean, Greece and Cyprus have a major voice in the formulation and execution of the European Neighborhood Policy in the Mediterranean as well as the Southern Neighborhood which includes Israel and Palestine. Given their position, Athens and Nicosia could proactively identify regional projects in which Palestine and Israel can jointly participate as well as collaborate with initiatives that support the growth of trade opportunities, European investment in the Palestinian economy, and academic exchange. While it is commendable that Greece and Cyprus support Israeli positions within the EU, a neutral approach to the Israeli-Palestinian issue could better ensure a sustainable, long-term relationship.

In the past, Cyprus functioned as a location for Israeli and Palestinian civil society engagement. Student programs brought together Israelis, Palestinians – as well as Greek and Turkish Cypriots – to learn about one another’s narratives, and map the successes and shortcomings of conflict resolution methods in other countries. Resuming these activities would allow Cyprus to serve as a neutral venue and draw from the Cypriot community’s professional know-how. With US Congress approving 250 million USD in funding to Israeli-Palestinian peacebuilding efforts in December 2020, there is an opportunity for third-party actors to take part in new initiatives.

Greece and Cyprus’ association to the Israeli-Palestinian conflict has changed in recent years, however they can play a constructive role in improving on-the-ground conditions in the Palestinian territories as well as supporting regional and international initiatives that encourage Israeli-Palestinian dialogue. Resolving the conflict is not only about final status issues. There are countless, smaller matters concerning the future of Israeli-Palestinian relations that have yet to be resolved and could benefit from external engagement. Future mediators should include Greece and Cyprus amongst the select number of international actors that can play a modest role in advancing the cause of peace.

Gabriel Mitchell is the Director of External Relations at the Mitvim Institute and a doctoral candidate at Virginia Tech University.