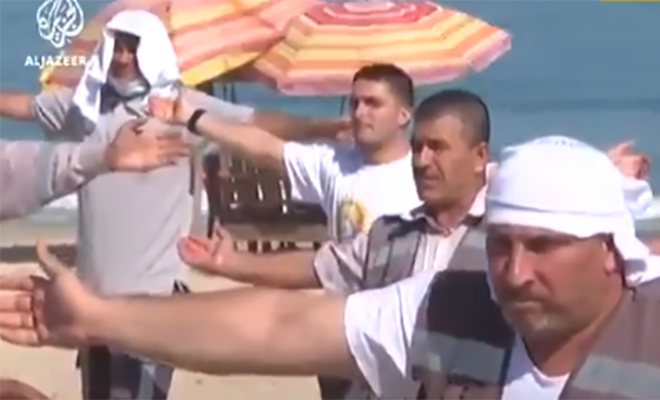 
On June 21, the International Day of Yoga, The Positive Energy Club organized a one-day yoga event for paramedics at the beach in the Gaza Strip.

#Palestinian paramedics who were on duty during Israel’s latest onslaught on #Gaza took part in a yoga session on the beach on #InternationalDayofYogaDown. pic.twitter.com/Yb9O9afnEQ

Naturally, it was milked for its propaganda value.

Except there was just one problem.

“The [Indian] embassy required the participants at the event to wear a white shirt with the logo of the embassy in Palestine,” she said, adding that the event was initially scheduled to include 25 paramedics and 25 members of the civil defense. However, the civil defense canceled their participation.

She added that they failed to convince the Health Ministry in Gaza to hold the event given the controversy it generated. The ministry’s mental health department said that they already have special emotional release programs targeting ambulance personnel, and that this yoga activity contradicts the ministry’s policy and plan.

Eventually, the club got official approval to hold the event from the Ministry of Health’s media department.

Murtaja said that Gazans in general rejected the event, especially after photos of the activities circulated on social media. They denounced the participation of paramedics at the event and criticized its organizers, considering that yoga is a forbidden activity that contradicts the teachings of Islam.

“They demanded to turn to prayers instead of yoga for psychological release. Who said that yoga is an alternative for prayers?” Murtaja said.

“Gazans do not believe in the role of yoga in improving their morale, but we are trying to spread this culture that is forbidden from their point of view,” He said. “We practice yoga as a sport, not as a religion.”

He added, “We were subjected to harsh criticism from the Health Ministry and social media activists, who accused us of practicing forbidden Buddhist rituals. The Health Ministry opened an investigation into the participation of ambulance personnel in the event.”

Ok, perhaps more than one problem.

Hassan believes, however, the event was held in the wrong place and time — at the beach at 8:30 a.m. with participants focusing on how to avoid the scorching sun, rather than focusing on the yoga exercises. The session was only 60 minutes and this was not enough time to do the exercises in a relaxed manner.

Must be Israel’s fault.

The 3-0 victory over China by Turkey's “Sultans of the Net,” the national women’s volleyball team, on July 25 at the Tokyo Olympics lifted national...
Read more
Sport

Teaching Gender and Women’s Studies in the Middle East