Four Myths About Israel and Palestine 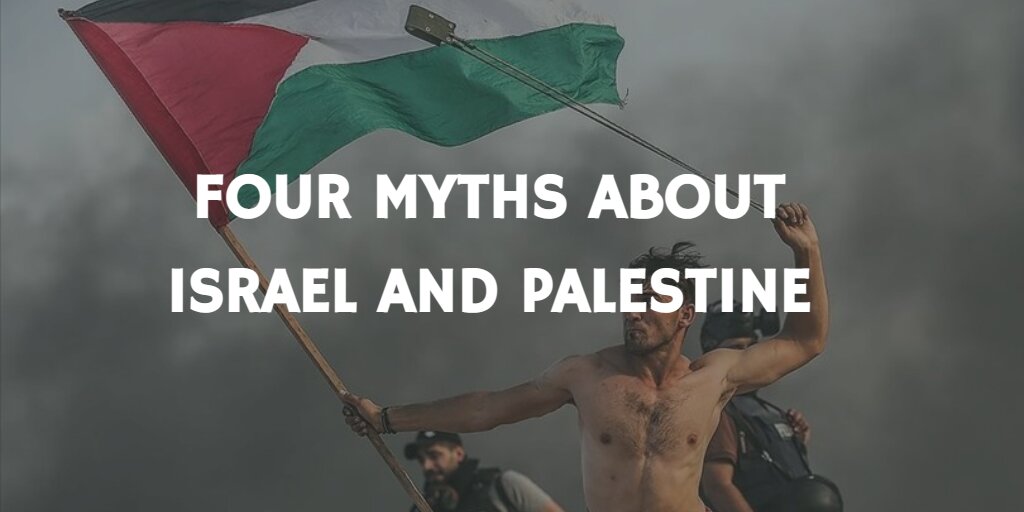 Four Myths About Israel and Palestine

Fabrication, twisted facts, and misinformation are some of the greatest weapons against progress and justice. At a time when false news and myths can travel faster than true stories, the most powerful way to support a cause is to have awareness and perception in identifying the victim and the problem.

#1 Myth: This is a war between Israel and Hamas

One of the biggest misconceptions used to frame the Palestinian-Israeli issue is that it is a war between Hamas and Israel only. To state this does not only remove Palestinian agency and other Palestinian organizations and liberation movements from the picture, but uses a passive voice to describe Palestinian victims and ignores important historical contexts.

Palestinian journalist Mariam Barghouti explains in this video how the expulsion of Palestinian families from their homes in the Sheikh Jarrah neighborhood fits into a pattern of ongoing colonialism.

Here’s how efforts to remove Palestinian families in the Sheikh Jarrah neighborhood of occupied East Jerusalem fits into the pattern of ongoing colonialism. pic.twitter.com/0OJYJmahLy

Barghouti adds that this proves that the Israeli regime is not just suppressing protest, as whether they are protesting in the streets or inside their homes, their rights are being violated.

It is also worthy to note that the Palestinian Authority has been in dialogue with Israel since November of last year in order to find solutions to peace, which comes after Israel froze its plans to annex parts of the occupied West Bank.

As part of the peace accords signed in the 1990s that would help lead to a Palestinian state alongside Israel, Israel’s annexation plans make a two-state practically impossible, and thus, hinder progress for peace and justice.

Suspending cooperation with Israel six months ago, the Palestinians said Israel’s annexation plans in the West Bank, territory it captured in the 1967 Middle East war, would make a two-state solution impossible.

Moreover, it is important to note that the West Bank, which has been demilitarized since 1994, continues to be taken over by Israel’s military presence as well as control, and in 2013, it was reported that Israel still had control of 61 percent of the West Bank.

Another common misconception is that Zionism equals Judaism, or that all Jews support the Israeli state.

There are countless stories of Holocaust survivors, such as Felicia Langer, who defended Palestinian detainees and wrote several books critical of Israel’s government and military. She was also denounced for calling Israel an ‘apartheid’ state.

There are also different Jewish groups, such as some ultra-Orthodox Jewish communities that have always rejected Zionism. Modern examples include the Jewish Voice for Peace, which carries out efforts to boost Palestinian voices on social media and demand immediate action from the US government to protect Palestinians’ human rights. “We must shift U.S. policy from protecting Israeli impunity and funding Israeli war crimes to holding Israel accountable,” it says on its website.

Ilan Pappé, a prominent Israeli historian and academic, also explains very clearly in all of his books, particularly in ‘Ten Myths About Israel’, how Zionism is merely a colonist project as it served to dehumanize Palestinian society and used various violent means to remove Palestinians from their homeland. For instance, David Ben-Gurion, leader of the Zionist movement and first Israeli prime minister, stated in 1937 that “with compulsory transfer we would have a vast area for settlement… I support compulsory transfer. I don’t see anything immoral in it.”

In ‘State of Terror: How Terrorism Created Modern Israel’, Thomas Suarez also argues that the use of terror by Zionist supporters of the idea of a Jewish state in Palestine was systematic and carried out at a frequency with an intensity that even appeared in daily newspaper headlines in the US and Britain in the 20th century, which referred to bombings, assassinations, and massacres against Arabs. Scholar David A. Charters also argues in his books that these terror tactics were strategically carried out to convince Britain to withdraw from Palestine and create the right conditions for the founding of Israel.

One popular myth insinuates the idea that Jews and Muslims never actually lived peacefully together, and that this is a religious conflict that has been ongoing for centuries.

Jewish historian Bernard Lewis notes that after his study of 14 centuries of Jewish life under Islamic rule since Muhammad, he concluded that the situation of Jews living under Islamic rulers ‘was never as bad as in Christendom at its worst’ and that ‘there is nothing in Islamic history to parallel the Spanish expulsion and Inquisition, the Russian pogroms, or the Nazi Holocaust.’

Moreover, historian Martin Gilbert explains that despite the developments in the modern world, and particularly up until the twentieth century, “the life of the Jews in some Muslim countries was never better than the 1920s.”

It is worthy to note that also prior to dismemberment of the Ottoman Empire, the population of the area of Palestine was not exclusively Muslim, and that there were Palestinian Jews. Under the Empire’s rule in the mid-16th century, there were around 10,000 Jews in Palestine, which makes up around 5 percent of the population.

Scholar Menachem Klein’s book “Lives in Common: Arabs and Jews in Jerusalem, Jaffa and Hebron” maps out a shared life and co-existence between Palestinians and Jews at the end of the 19th and the beginning of the 20th centuries. He also quotes several journal entries written by Palestinians at the beginning of the 20th century, which state that non-Ashkenazi Jews were seen as awlad al-balad (“sons of the land”) and yahud awlad al-arab (“Jewish Arabs”).

You’ve most probably seen this one, which claims that ‘Palestine’ never existed until recently, and that Palestinians were merely ‘Arabs’ living on desert land.

However, the name “Palestine” or “Palestina” in fact has ancient origins. It was brought into use by the Greeks, Romans and even Ancient Egyptians. Ancient Egyptian records, revealed in a new study of 3,200-year-old documents from Ramses III, suggest that the Philistines were native Middle Easterners.

Ilan Pappe also demonstrates that Palestine had a distinct Arabic Palestinian dialect, customs, folklore and traditions, and this is evidenced by the annual Music Festival of Yabus organized by the Palestinian Ministry of Culture. Similar to any other “Arabized” Arab nations today, the Arab identity of Palestinians does not negate their own origins and their own independent existence.

There are countless Palestinian writers and artists, such as Nahil Bishara, Edward Said and Ghassan Kanafani, that have used their art to voice their identity and sufferings, which spans from the times of the British Mandate to the 1967 war. In Salam Mir’s book “Palestinian Literature: Occupation and Exile”, he states that the emergence of “Poetry of Resistance” in the 1950s is a witness to the resilience of Palestinians inside Israel and that “Palestinian literature is at the heart of the Palestinian struggle.” To disregard Palestinian national identity, thus, would also  disregard generations and decades of human expressions of that identity, and prevent them from having the right to determine their own national identity.

Syrian refugees are no longer guests in Sudan