Forget the US elections, the Palestinians need to choose their own way forward 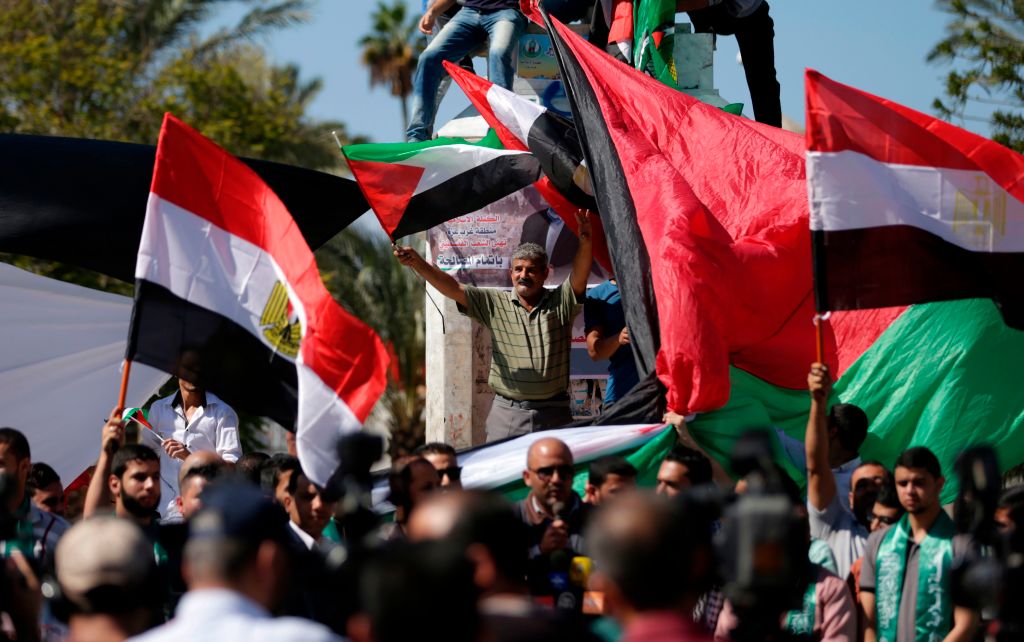 
Since Fatah and Hamas reached a reconciliation agreement in September, Palestinian scholars, activists, and journalists have speculated over when, how, and if this latest reconciliation might actually go forward. Many observers, both inside and outside of Palestine, view the move as a response to the recent rapprochement of Arab countries with Israel, as well as to uncertainty over this week’s U.S. presidential elections. The fact that reconciliation is a response to external events rather to a Palestinian national need suggests that Palestinian leaders still lack a national strategy or vision for their people, and that does not bode well for the coming period.

It has been nearly 15 years since elections were held for the Palestinian Legislative Council (PLC). Last time around the body was quickly paralyzed after Israel arrested many of its members and the international community refused to accept an outcome that brought Hamas to power. Ordinary Palestinians have gotten used to reconciliation rounds between the two parties, and few are holding their breath that this time will be different. Given the unfulfilled reconciliation promises of the past, many do not trust the leadership. It has repeatedly raised expectations and hopes for elections as a way to preserve the legitimacy of the political elite and senior officials in the Palestinian Authority (PA), only to put them off under one pretext or another.

The latest reconciliation deal in September called for new elections for the PLC and the PA presidency, as well as for the Palestinian National Council, the Palestine Liberation Organization’s (PLO) moribund parliament-in-exile, followed by the formation of a national unity government. A follow-up meeting of the general secretaries of the factions to prepare for the elections was to be held in October. However, the meeting was postponed due to ongoing differences of opinion about the way forward. Apart from some pro forma official statements attempting to explain the inactivity, the process has once again stalled.

What happened and what are Palestinian leaders waiting for?

There are several reasons why the latest reconciliation attempt appears to be dissipating, including the difficulty of forging a partnership between Hamas and Fatah within Palestinian politics, which is not accustomed to power-sharing as part of its political culture. But President Mahmoud Abbas may also be waiting for the results of the American elections.

For Fatah, a victory by the Democratic candidate, former Vice President Joe Biden, could save the PA from having go down the path of sharing power with Hamas, something that both Israel and the U.S. administration are likely to oppose. Should Biden win, Abbas will be eager to normalize relations with the United States. Abbas’s leadership might also see an opportunity with Biden to resume a U.S.-led peace process in support of the two-state solution, as his latest suggestion to hold an international peace conference seems to suggest. For Abbas’s leadership, any unity government would be an obstacle to the desired goal of two states given its heavy dependence on the U.S. as a mediator, donor, and political supporter. Therefore, it can be argued that pursuing a two-state solution is incompatible with national reconciliation, given the U.S. and in particular Israel’s position against Hamas being involved in any form or shape.

For Fatah and the existing PA leadership, they would like nothing more than to restore relations with America to normal, even if that means returning to the traditional course of managing rather than resolving the conflict. The “conflict management” approach is based on seeking to reduce the intensity of the conflict between the two parties as much as possible, while delaying its resolution to a future, albeit unrealistic, moment in which an acceptable political settlement can be reached. Therefore, the “conflict management” path depends on keeping the two-state solution option alive, as it represents an appropriate, and often desirable, cover for all parties.

Biden is expected to take several restorative steps, such as finding a way to reopen the PLO office in Washington, restoring the flow of financial aid to the PA, renewing its commitment to UNRWA, and possibly reopening the U.S. consulate in East Jerusalem. However, the Palestinians will have to pay a high price to return relations with America to what they were before the Trump era. Ordinary Palestinians do not want to restore the situation to the status quo with Israel; they do not want security coordination with Israel that fails to protect Palestinians from settlers’ violence, or a return to a path of open-ended negotiations. The question is if Palestinians should pay that price. The only way to know what Palestinians want is by giving them a chance to voice their preference through democratic elections.

If Trump wins the elections, however, this could accelerate unity and reconciliation attempts as Fatah and the PA would look for an immediate path to avoid becoming irrelevant among their own people. It is expected that the “deal of the century” will become a reality, including Israel’s de jure annexation of the Jordan Valley, among other areas of the West Bank. In addition, if Trump gets reelected there will be a long line of Arab countries waiting to normalize relations with Israel, including Morocco, Oman, Mauritania, and possibly even Saudi Arabia. This will only lead to the further alienation of Palestinians, who are likely to take out their frustration on the existing leadership. In addition, given the current lack of funding, the PA would likely run out of money and could collapse, with the two-state solution most likely replaced by the current one-apartheid-state reality.

These factors will create pressure to dissolve the PA, as many Palestinians have been calling for. The PA will not only have lost its reason for existing, it will no longer have an excuse to continue as is. It will be necessary to think about new directions for alliances and partnerships among different factions, and the current leadership will have to regroup in order to gain any influence.

However the U.S. elections turn out, the Palestinian leadership should not decide their next move and the future of millions of Palestinians based on the results. If the current Palestinian leadership is not able to decide on the least-damaging path, they should step down and hold elections sooner rather than later. At any rate, the PA should not retreat from its promise to hold elections and reform their political institutions. Palestinians deserve to have a stable political life governed by law that supports Palestinian steadfastness and resilience, despite the existence of the occupation and regardless of who is in the White House.

Dr. Carol Daniel Kasbari is a social scientist with 20+ years of experience designing and leading programs in the field of conflict mitigation, peacebuilding, advocacy, and nonviolent resistance in very complex international environments focusing on the MENA region and Europe. She is a Non-resident Scholar with MEI’s Program on Palestine and Palestinian-Israeli Affairs and teaches as an adjunct professor at the School for Conflict Analysis and Resolution (Carter School) at George Mason University in Virginia. The views expessed in this piece are her own.

Cautious Pragmatism: The Biden Victory from a Saudi Perspective