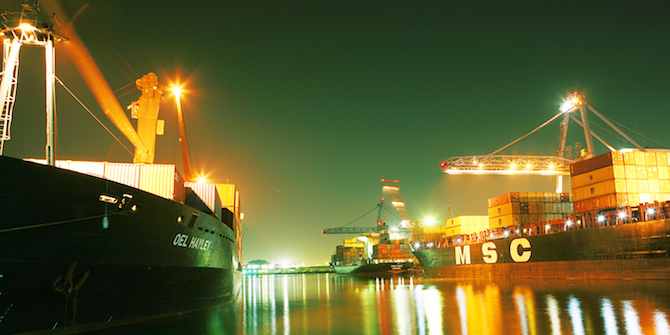 For many countries, extant evidence suggests that the expansion of primary exports can impede economic growth, while manufactures offer positive externalities and knowledge spillovers to non-export sectors. In contrast, primary imports can accelerate economic growth, as they can be used as inputs in domestic production. In addition, imports of manufactured goods can contribute to economic growth through technology transfer and know-how. But are the above relationships valid in the case of Kuwait?

Over the last five decades, Kuwait has experienced significant trade growth. Real (inflation-adjusted value) manufactured exports increased at an average annual growth rate of 8.9 percent, while primary and manufactured imports increased at average annual growth rates of 5.2 and 6.0 percent respectively. Although trade has increased significantly, the real gross domestic product (GDP) of Kuwait has increased at an average rate of 2.3 percent, while the world average and that of high income countries has been estimated to be 3.1 and 2.6 percent respectively for the same period. Have manufactured exports been responsible for economic growth in Kuwait? In addition, which categories of imports have contributed most to export diversification and to economic growth?

Previous research for Kuwait has shown that aggregate exports and imports have caused economic growth in the short run but in the long run the causality has run from growth and imports to exports. However, the effect of manufactured exports and disaggregated imports has not been examined at all. In our LSE Kuwait Programme project, we investigate whether an increase in the degree of trade diversification (change in the country’s trade basket) will foster further economic growth in Kuwait in an effort to inform the process of designing future policies for sustaining and accelerating economic growth.

Our results to date show that manufactured exports and disaggregated imports, together with domestic investment and human capital, have contributed to Kuwait’s economic growth in the short run. In turn, economic growth has created new needs that could not be covered by domestic production, leading to the expansion of both primary and manufactured imports.