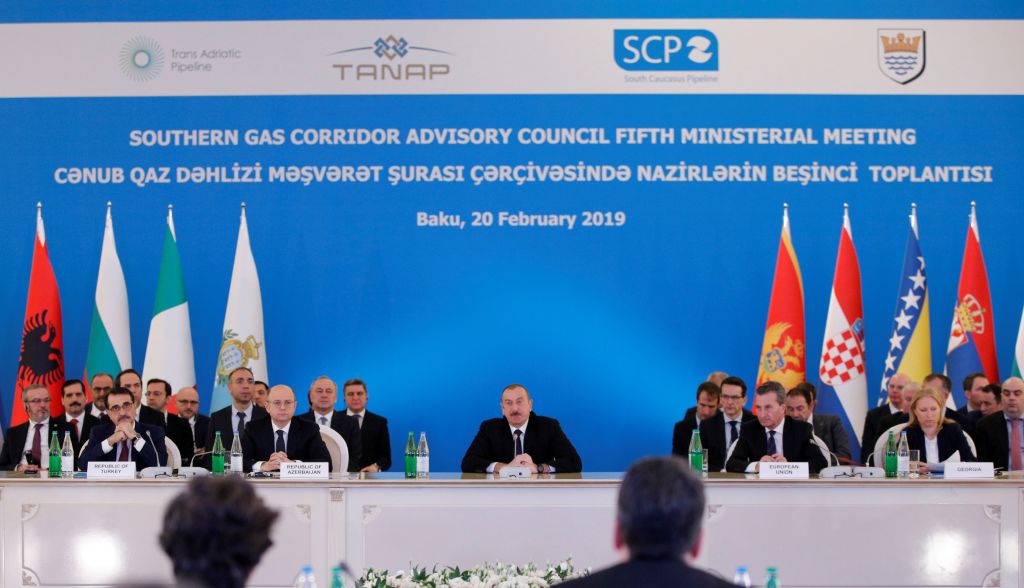 
In 1906, the South Caucasus’ first energy pipeline was completed, connecting Baku on the Caspian Sea with Batumi on the Black Sea. More than 115 years later, this pipeline, measuring a mere eight inches in diameter and transporting kerosene, has been replaced with a modern network of natural gas and oil pipelines connecting the heart of Asia with Europe. With proper investment and the correct policies, even more oil, gas, and other goods will be flowing from the Caspian region to Europe and global markets.

There has been much progress since 1906 connecting the region through the South Caucasus. The Baku–Supsa pipeline, finished in 1999, brings oil from Azerbaijan to Georgia’s Black Sea coast. The Baku-Tbilisi-Ceyhan (BTC) pipeline, operational in 2006 and strongly backed politically by the U.S. during the Clinton Administration, brings oil from the Caspian region to the outside world through Azerbaijan, Georgia, and Turkey. The South Caucasus Pipeline (SCP) went into service the same year and connected Azerbaijan’s gas fields to Turkey via Georgia.

In June 2018, construction finished on the Trans-Anatolian Natural Gas Pipeline (TANAP), further linking Azerbaijan to Turkey. TANAP linked with the Trans-Adriatic Pipeline (TAP), which runs from the Turkish–Greek border to Italy via Albania and the Adriatic Sea. The first shipment of Caspian natural gas made its way to Europe using this new route on the last day of 2020—a rare, good news story in an otherwise dismal year for geo-politics.

These new gas pipelines, in addition to the existing SCP, are known as the Southern Gas Corridor. In total, this is a network of pipelines running 2,100 miles across seven countries and will eventually supply 60 billion cubic meters of natural gas to Europe.

With the completion of the Southern Gas Corridor, policymakers must think about what is next for regional energy policy. This is particularly true for the Biden Administration. In 2021 there are four opportunities for the new Administration to help Europe become more energy independent from Russia.

The first opportunity is push regional partners in the South Caucasus and Central Asia to finally build a Trans-Caspian Pipeline to bring even more natural gas to Europe bypassing Russia. A pipeline is the only economically viable way to move natural gas across the Caspian Sea. This means that right now there is no profitable way to get Central Asia’s gas to Europe without going through Russia or Iran.

While a fully-fledged pipeline should be the long-term goal, in the short term, the transatlantic community should encourage Azerbaijan and Turkmenistan to construct an interconnector between two existing gas fields in the Caspian. An interconnector would serve as a proof of concept, a confidence building measure between Baku and Ashgabat, and might reduce Russian objections in the same way a fully-fledged pipeline might not. The Biden Administration should provide vocal diplomatic support for the project in the same way the Clinton Administration did for BTC in the 1990s.

The second opportunity is to use the momentum created by the Trump Administration and U.S. Congress to kill off Nord Stream 2 once and for all. This proposed gas pipeline linking Russia directly with Germany will increase Europe’s dependence on Moscow for energy. Notwithstanding the tough line and threat of sanctions from the Trump Administration, and vocal opposition from many corners across Europe, Germany remains committed to seeing Nord Stream 2 becoming operational.

This project is neither economically necessary, nor is it geopolitically prudent. Rather, it is a political project led by German financial interests and Russian geopolitical machinations to greatly increase European dependence on Russian gas, magnify Russia’s ability to use its European energy dominance as a political trump card, and specifically undermine Eastern and Central Europe.

The blatant poisoning of Russian opposition leader Alexi Navalny should have been the end of this project. The Biden Administration should be leading the charge inside NATO to convince Berlin to find the moral and geopolitical fortitude to end the Nord Stream 2 project.

Thirdly, the Biden Administration should continue U.S. support to the Three Seas Initiative (3SI). Launched in 2016 to facilitate the development of energy and infrastructure ties among 12 nations in Eastern, Central, and Southern Europe, the 3SI aims to strengthen trade, infrastructure, energy, and political cooperation among countries bordering the Adriatic Sea, the Baltic Sea, and the Black Sea. Europe’s energy security can be bolstered by the 3SI.

As a vestige of the Cold War, most infrastructure in the region runs east to west, stymieing greater regional interconnectedness. With TAP coming on line, the U.S. should work with the countries of the 3SI to develop north–south interconnections and pipelines. A good example is the long-discussed Ionian Adriatic Pipeline. Bulgaria holds the rotating presidency of the 3SI grouping so there will be an important focus on the Black Sea in 2021. The U.S. should take advantage of this to ensure more transatlantic focus on the Black Sea.

The fourth opportunity derives from the aftermath of the recent fighting between Azerbaijan and Armenia. Looking at a map, one can see that there are only three ways for energy and trade to flow overland between Europe and Asia: through Iran, Russia or Azerbaijan. With relations among the West, Moscow and Tehran in tatters, that leaves only one viable route for hundreds of billions of dollars’ worth of trade — through Azerbaijan. This small trade corridor, only 100 kilometers wide, is known as the “Ganja Gap” — named after Azerbaijan’s second-largest city and old Silk Road trading post Ganja, which is located in the region. Thankfully, due to the November 10 ceasefire agreement between Azerbaijan, Armenia and Russia this important trade corridor is secure and stable—at least for the time being.

It is impossible to calculate how many billions of dollars in foreign direct investments the almost 30-year-old frozen conflict between Azerbaijan and Armenia has cost the region. Now that there is some degree of peace and stability, the U.S. should consult with regional countries on possibilities for new regional energy and infrastructure projects. This could help boost the economic prospects of the region and help build an enduring peace between Azerbaijan and Armenia.

Thinking boldly and creatively, if there is genuine peace someday, and if the idea of a Trans Caspian Pipeline is realized, there could be a Turkmenistan-Azerbaijan-Armenia-Nakhchivan-Turkey gas pipeline (TAANaT). The idea would not be to compete with TAP, TANAP and the Southern Gas Corridor. Instead, such an ambitious project could help the region better integrate, build trust among old adversaries, and support Armenia with its own energy issues. While the region is probably years away from diplomatic conditions allowing for such a project, the U.S. should start a debate and discussion now on what is possible.

The Caspian Sea and the South Caucasus are an important, if often-overlooked, region for the United States. The region’s energy resources are great and could play a significant role in helping Europe to loosen its dependence on Russia for oil and gas. Not only will energy independence from Russia benefit Europe, it will also increase the importance of the South Caucasus in the eyes of policymakers. In addition, the less reliant Europe is on Russia for energy, the better it it will be for the U.S. which has security obligations through NATO to the continent.

If the U.S. is to have a grand strategy for dealing with a resurgent Russia and to help Europe improve its energy security, policymakers in Washington cannot ignore the Caspian region or how it connects to the outside world.

Re: Israeli ‘sex tourism’ is the fruit of normalisation with the UAE – Middle East Monitor