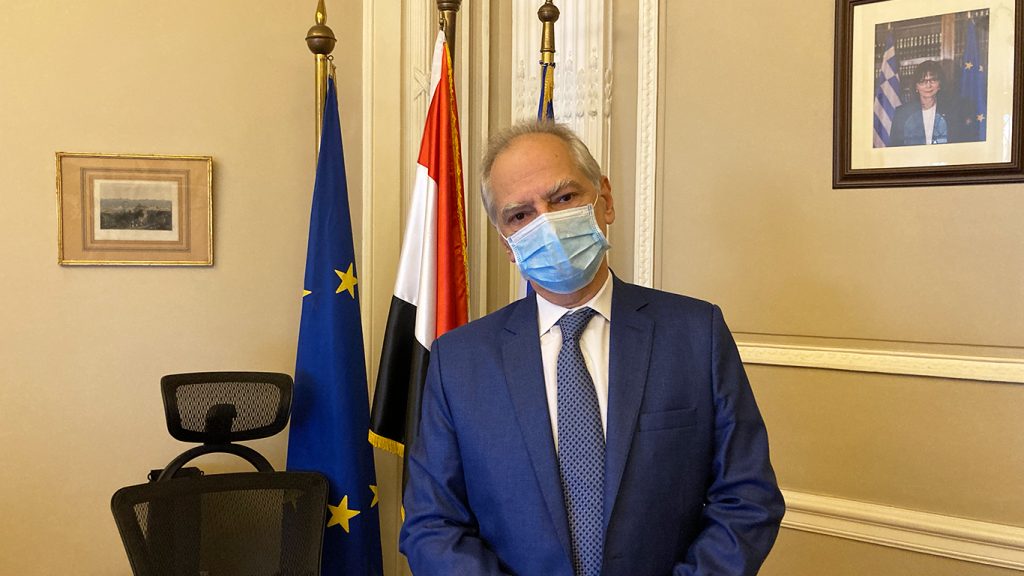 “What matters always is not the knowledge of the grammar of the language, it’s to know the mentality of the people,” His Excellency the Greek ambassador to Egypt Mr. Nikolaos Garilidis explains as he discusses the job of a diplomat in an exclusive interview with Egyptian Streets.

Originally born in the city of Port Said in Egypt, Garilidis is a third generation Greek living in Egypt with a century-old family lineage that has been present in this small coastal Egyptian city. Following graduation from Cairo’s Abet Greek School, he went on to study Law at The University of Athens, after which he joined the Ministry of Foreign Affairs of the Hellenic Republic (Greece) in1982.

“Although I wanted to become an archeologist, my father wanted me to be a civil engineer,” his excellency recalls, “But you see, the last word belongs to destiny.” Indeed, anyone who sits with Garilidis will quickly identify his passion towards history and all the knowledge it withholds.

As we ventured into the many responsibilities of a diplomat, the Greek Ambassador effortlessly managed to find the various interlinking ways history and one’s roots play a role in the diplomat’s work today – and in life in general. He tackled a range of topics – from the languages a diplomat must know and how the roots of certain words in various languages ultimately link us all together, to the importance of understanding people’s mentality, traditions and cultures and how they came to be.

“It is mentioned by Homer in the Odyssey; he speaks of how Odysseus visited a lot of cities and he got to know the mentality of a lot of people, and he noticed always that people would laugh,” Garilidis explains as he tries to highlight the importance of understanding a culture’s mentality, “But animals do not laugh, no animal can laugh; human beings however, have a sense of humor and they get offended – this sense of humor varies a lot from one country to another, so you have to bear all these things in mind.”

Surely any diplomat knows of the importance of understanding the ways and customs of various parts of the world; perhaps, however, it is Garilidis’ experience having grown up in the midst of two different cultures that has sparked his particular interest in the matter.

While Greece and Egypt are neighboring countries and may share many similarities, they still present two different types of cultures – both of which have deeply rooted historical value. “When we come to specify and examine two nations, especially when they are neighboring, then the similarities are striking and much more than the differences,” his excellency tells Egyptian Streets.

“You can see the differences in religion and in the language, but again in both languages there are many words that are hidden. Some people realize these words are not exactly a national word, it has become part of the language, but originally it has been a loan, or a double loan. It’s very interesting,” he continues.

He goes in to give examples of Greek words that are originally Arabic and vice versa, making a point through the Greek work ‘kamari’ for example. In Greek when one says ‘kamari mou’ it means ‘my pride and glory’, but when one takes a closer look at the origin of the word, they will realize it is the Arabic word ‘kamar’ or more widely pronounced as ‘amar’ meaning something that is beautiful.

A History of Greek-Egyptian Ties

Greece and Egypt have both evidently been tied together since ancient times. The Greek Ambassador was quick to point out how their history as neighboring countries is particularly worth noting.

“The fact that we see archeological remains, Greek in Egypt and pharaonic Egyptian in Greece, it means that the two nations were in contact since the second millennium B.C.,” explains his excellency.  “And if you have a small boat in Crete and you do nothing – you leave the boat free – you will find yourself in Marsa Matrouh. Why? Because the sea currents have been the same for the the past 50,000 years and more,” he continues.

The ambassador goes on to say that for the majority of written history, Greece and Egypt have always seemed to be in friendly ties; there has been no track record of any sort of conflict between the two countries. What is also interesting is the fact that these two places do in fact have a rich history in common, often being one of the main reasons of tourism to both countries; Egypt being known for the Pyramids for example, and Greece for the Acropolis.

With that in mind, the conversation also took route towards the importance of keeping such rich history intact. The history of the world is generally important to both keep track of and to keep hold of in the form of ancient artifacts or artworks, for example.

“The most minor of details are of the greatest importance,” says Garilidis, “Of course everybody has to read about international history, but first they must start with their own national history because essentially we are the same in everything that has taken place on this very small planet that we all live on.”

The ambassador also mentions museums and the origin or the word, as well as the history of the first known museum. He says that, “[The word] museum means ‘the house of the muses’ – as in the nine muses of Apollo – we first hear of the word museum in the year 300 B.C. in Alexandria during the reign of Ptolemy I; at the time, on would visit and see nice things or interesting things or curious things, so this word has been picked up to describe what we now call musings.”

“These musings, they attract a lot of tourists to our countries,” he concludes. His excellency also points out the fact that the museums of the world today contain various items from both Greek and Egyptian history, so much so in fact that it is partly a loss to both countries. He points out the fact that there are many questions accompanied to this fact, such as, “What should we reclaim to our countries or not? What is symbolic and what is not? What has been legally taken or not? But can we talk about legal endeavors 300 years ago?”

Garilidis makes a point to say that yes a big part of having one’s own artifacts presented in their country of origin is in large part all about pride, but he also says that what is more important than all this is to write about these discoveries. “We need to write about these things, to learn about it and to discover new information about it – and here I have to say that the big contribution is all thanks to books, and in explanations given to our heritage and pride. These have mostly been undertaken by a series of scientists, or archeologists as we call them today,” he explains.

Going Back to Our Roots

On the topic of pride and how history can affect today’s current tourism climate, the Greek Ambassador delves into the innate human need of discovering one’s roots. He talks of how people who have roots in countries other than where they were born are usually very curious to explore this mysterious part of their identity.

In fact, that is precisely why the NOSTOS initiative came about in 2018 – with the purpose of helping Greeks and Cypriots re-connect to their roots in Egypt and vice versa. “Both Greece and Egypt, they have a lot of people who have emigrated to third countries,” Garilidis tells Egyptian Streets, “and as we speak there are 100,000 Egyptians living in Greece and around 2,100 Greeks in Egypt; in the 1950’s there were more than 100,000 Greeks living here.”

This curiosity to explore a part of one’s heritage and identity is both a great way to fulfill one’s sense of self, in addition to being a wonderful opportunity for tourism in both countries. After all, most people are always interested in finding out more about their ancestral lineage; it is a way both to feel connected to history, as well as truly understand oneself and foster a newfound appreciation to a culture they may not have been otherwise familiar with.

As our meeting was coming to and end, the Greek Ambassador slightly delved into both Greece and Egypt’s ability to overcome challenges and obstacles both together and as individual countries. Not only that, but both countries have developed a relationship that fosters opportunity.

“Both [Greece and Egypt] encourage investments, and in both countries we have investments by big firms or investors in several sectors of the economy. My advice for anybody who wants to invest, as there is good will and encouragement from the government to learn about the bureaucracy that exists in both countries, is that they must know the steps and how it will differ from one country to the other,” Garilidis encourages.

The beauty of Greek-Egyptian relations, according to Garilidis, is the fact that they are like-minded countries that are both concerned with securing stability and cooperation both around the neighboring areas, as well as worldwide – and always within the principles of international law.

“Greece and Egypt have given proof of their respect of international law not only today, but in the last 60 years,” he tells Egyptians Streets.

And on un uplifting note, his excellency the Greek Ambassador to Egypt concludes that although both countries, and the entire world for that matter, may occasionally face tough times, “we will get through everything with patience.”