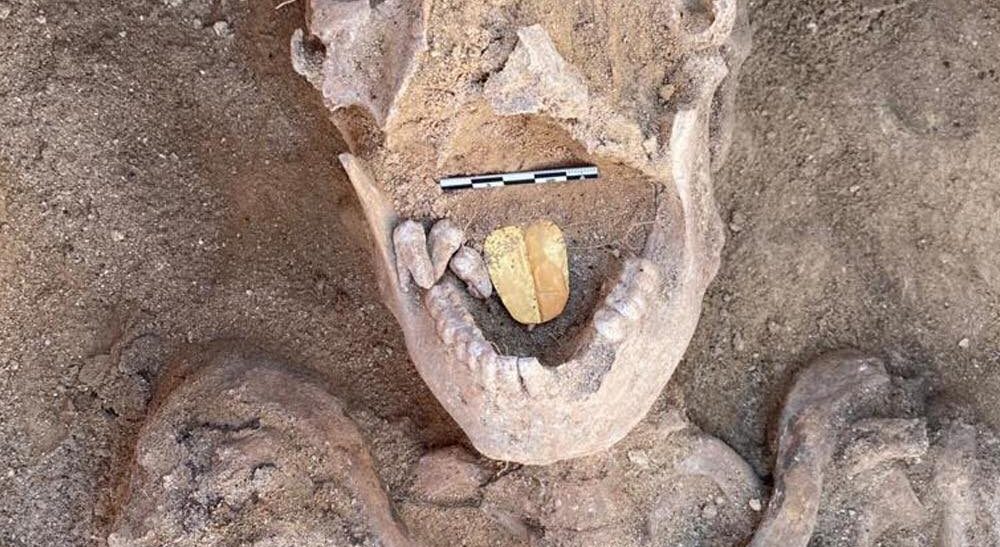 The Ministry of Tourism and Antiquities announced last Friday that an Egyptian-Dominican archaeological mission in western Alexandria succeeded in discovering 16 burials that were popular in the Greek and Roman eras.

The mission, from the University of Santo Domingo headed by Dr. Kathleen Martinez, discovered several mummies in a poor preservation state in rock-cut tombs (burial shafts) at the Taposiris Magna temple.

The discovery is particularly significant because of its indications of the characteristics of mummification in the Greek and Roman eras 2,000 years ago; particularly the unique amulets of gold foil tongues that were placed in the mummies’ mouth. This is said to be a ritual done in order to ensure the mummy’s ability to speak in the Osirian court in the afterlife.

There are two particularly important mummies in this discovery, Dr. Martinez says, one bearing gilded decorations showing Osiris, the god of the afterlife. The other is wearing a crown decorated with horns and a cobra snake at the forehead, with its chest with a gilded decoration of a wide necklace from which hangs the head of a falcon, the symbol of the god Horus.

“During this season the mission found a number of archaeological discoveries, the most important of which is a funeral mask for a woman, eight golden flakes representing the leaves of a golden wreath, and eight masks of marble dating back to the Greek and Roman eras, and these masks show high craftsmanship in Sculpture and depiction of the features of its owners,” reported Dr. Khaled Abo El Hamd, Director General of The Alexandria Antiquities via the Ministry of Tourism and Antiquities’s Facebook page.

Posted by ‎Ministry of Tourism and Antiquities وزارة السياحة والآثار‎ on Friday, January 29, 2021

The Temple of Taposiris Magna was the location of several significant explorations in the last ten years, where several coins bearing the name and image of Queen Cleopatra VII were found inside the temple walls, as well as statues and temple grounds that indicated it was built by King Ptolemy IV.