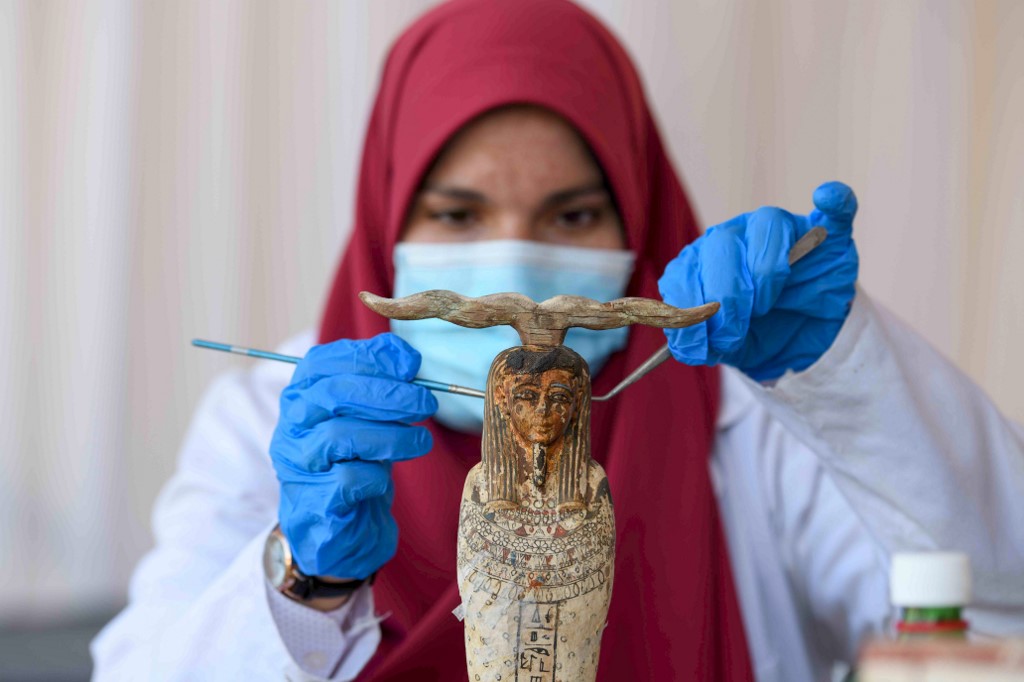 
Egypt announced on Saturday that it had discovered more than 100 intact sarcophagi dating back more than 2,500 years, making it the largest find of its kind in 2020.

The sealed wooden coffins were found in three burial shafts 12 metres underground at the Saqqara necropolis, just south of Cairo.

The sarcophagi, unveiled amid much fanfare, belonged to top officials of the Late and Ptolemaic periods (712-323 BCE and 305-30 BCE respectively) of ancient Egypt.

Archaeologists opened one coffin to reveal a mummy wrapped in a burial shroud adorned with brightly coloured hieroglyphs, the ancient Egyptian pictorial form of writing.

Saqqara, home to more than a dozen pyramids, ancient monasteries and animal burial sites, is a vast necropolis of the ancient Egyptian capital of Memphis, a Unesco World Heritage Site.

“Saqqara has yet to reveal all of its contents. It is a treasure,” Antiquities and Tourism Minister Khaled al-Anani said at the unveiling ceremony.

“Excavations are still underway. Whenever we empty a burial shaft of sarcophagi, we find an entrance to another.”

The latest find came just over a month after archaeologists in the area found 59 other well preserved and sealed wooden coffins, also dating back more than 2,500 years.

The government is hoping that such discoveries will boost the country’s tourism business, which has been hit hard this year by travel restrictions related to the coronavirus pandemic.

Anani noted how archaeologists had found more than 40 statues of ancient Egyptian deities and funerary masks.

Another two wooden statues were found in the tomb belonging to an ancient judge of the 6th dynasty, according to Mostafa Waziri, secretary-general of Egypt’s Supreme Council of Antiquities.

It was not immediately clear if the statues depicted any of the judge’s family members, but one statue is believed to depict an individual by the name Heteb Ka, who was “venerated by the king,” Waziri said.

“The beauty of the statue… is seen in the intricacy of its eyebrows, moustache, and eyelashes. It is absolutely beautiful and wonderful,” he said.

The sarcophagi will be distributed among several museums in Egypt, including the yet-to-opened Grand Egyptian Museum at the Giza plateau, on the outskirts of Cairo.

In the conservative Qatari society of Ameera AlAji’s youth, where she says expressing emotions was discouraged or even condemned, she found a liberating...
Read more
Travel

US generals head to Tunisia ahead of major military exercise

by Niranjan Jose Fireworks over Al-Janoub Stadium, newly built to host matches for the 2022 World Cup in Qatar. Source: Qatar 2022Sport has been...
Read more