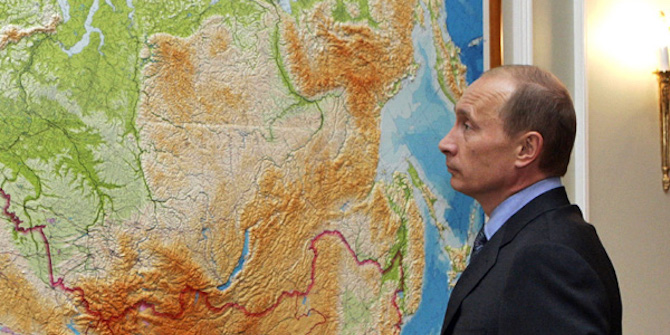 This piece applies Nicholas Kitchen’s model of grand strategy formation, based on neoclassical realist foundations, to examine Russia’s policy in the Middle East. The key difference between neoclassical and other forms of realism, is that the former draws its theoretical foundations from Innenpolitik (domestic policy) theories, which emphasise domestic factors’ influence on foreign policy. Indeed, when looking at Russia’s policies in the Middle East, domestic factors are important to consider, particularly the role of leadership, as neoclassical realists hold that foreign policy is predominantly driven by political elites and leaders. Furthermore, due to Russia’s religious diversity and multi-ethnic composition, its minorities share socio-religious identities with people across the Middle East, and particularly with Muslim communities. These domestic factors can be leveraged to support Russia’s goals in the region.

The first task of grand strategy formation involves identifying the state’s security threats. To do so, it is important to understand the Russian leadership’s position. In 2005, Putin referred to the collapse of the Soviet Union as ‘the greatest geopolitical catastrophe’ of the twentieth century. This arguably reflects a core aspect of his perspective, and the country’s course, which he expressed in his famous speech at the Munich Conference on Security Policy in 2007, stressing the importance of a multipolar international world system. Dmitri Trenin reflects this vision in 2016, and uses it to explain one of Russia’s most significant threat perceptions: ‘Russia’s policy in the Middle East is generally aimed to restore its historical presence in the world, and expansion of influence over other external powers, especially the existing unipolarity under US hegemony, which have been challenging Moscow’s security’.

Nicolas Kitchen also identifies another element of grand strategy, known as auxiliary goals, which cover strategy beyond the national interest (these may be territorially or economically expansionist, under the premise of serving ‘global’ interests or preserving cultural and historical ties in other states). The Russian Foreign Policy Concept of 2016 highlights the direct impact of political instability in the Middle East on Russia. The document includes security objectives (the containment and weakening of Islamic extremism and radicalism); political objectives (the creation of a system of long-term political alliances); and economic objectives (the expansion of Russian presence in the regional markets for arms, nuclear fuel, oil and gas, food; attracting foreign investment; and maintaining energy prices).

Another element in the formation of grand strategy, Kitchen argues, lies in the state’s selection of means available to address identified threats. For instance, Russia has arguably used smart power to achieve its objectives. Smart power is the ability to combine hard and soft power resources into well-defined strategies under skilful leadership. The latter speaks to neo-classical realism, which recognises the importance of domestic factors.

To deal with security threats and reach Russia’s auxiliary goals in the region, hard power – military power – was essential. Russia justified its presence in Syria by stating that it is fighting against the Islamic State and other extremist groups. This itself is connected to domestic concerns, namely Moscow’s fear of the radicalisation of minorities across Russia, and by extension, the post-Soviet space. Geopolitically, Syria was crucial to Russia’s return as a great power, at least on the basis of military influence. Similarly, Russia’s fallout from the Libyan civil war helped cement its position in the region. In Libya, Russia militarily supported General Khalifa Haftar, who is head of the Libyan National Army (LNA). At the same time, Moscow brokered the 2020 talks between the two factions of the civil war – the National Accord (GNA) of Fayez al-Sarraj and the LNA. Russia’s decision to do so was not random, and was instead part of a deliberate strategy of balancing relations with all sides, including between adversaries.

Another element of hard power is economic power. Indeed, Russia’s economic power has limitations, so in order to achieve its aforementioned auxiliary economic goals, relations with Middle Eastern partners are crucial, especially in the energy and weapons markets. Despite geopolitical tensions, Moscow has tried to achieve mutually beneficial forms of cooperation with states across the region, and in various economic sectors. For instance, despite the direct clash between Russia and Turkey in 2015, when a Turkish fighter jet shot down a Russian Su-24 ground attack aircraft, trade between the two countries (which plummeted in 2016 as a result) is steadily on the rise again. In Iraq, energy remains the Kremlin’s key sector of influence. The Gulf states investments are also important for Russia’s economy. Trade percentage indicators with Gulf states have generally increased; for example, 2020 saw an upturn of 78 per cent turnover in comparison to 2019 with the United Arab Emirates (UAE). Russia’s share of the Middle East defence market has doubled since 2016, with Saudi Arabia, the UAE and Qatar as the top buyers in 2019. Also, the Gulf Cooperation Council (GCC) states are central to the stability of Russia’s energy market and its integration into the global market.

In tandem with these measures that reflect hard power, Russia has deployed soft power as part of its strategic objectives. Indeed, its population of 25 million Muslims provides a source of religious soft power in the Middle East, and especially the Gulf states, given the latter’s special status in the Islamic world (e.g. the significance of Mecca and Medina in Islam, as well as the Gulf’s reputation as an established hub for Islamic banking and finance). Moreover, a shared Islamic heritage supports people-to-people diplomacy, particularly considering the personal links that heads of Russian regions or republics have established with the GCC. For example, the head of Chechnya, Ramzan Kadyrov, the former head of Ingushetia, Yunus-bek Evkurov, and the President of Tatarstan, Rustam Minnikhanov have each entered the holy Muslim site of al-Kaaba, during the hajj or umrah pilgrimages in Saudi Arabia. These links were crucial for building personal relations with Gulf leaders, which in turn eased the way for GCC investments in Russian regions -particularly ones with significant Muslim populations. Another example is the Tatar-Turkish cooperation. Both the Kazan Tatars and Turkish people are predominantly Muslim, Turkic nations, with cultural and linguistic similarities, as well as shared traditions. Perhaps it is not surprising that the Turks are the biggest investors in Tatarstan’s economy.

Russia’s grand strategy is based on a neoclassical realist view that stresses the importance of security threat perception in determining the country’s alliances. In this case, Iran remains an important strategic partner for Russia, largely due to both states’ shared perception of a Western threat. This partnership is possible despite the complex historical relations between Iran and Russia, namely Soviet support for Iraq during the Iran-Iraq War, or the fact that before the 1979 Islamic Revolution, Iran was a United States ally, and both Tehran and Washington considered Moscow as a threat. However, as indicated above, Russia’s relations with other states across the Middle East are important for its grand strategy in the region. Using different means of power, it tries to balance its relations with Turkey and Israel, while supporting al-Assad’s regime in Syria, and maintaining economic and diplomatic relations with Gulf states.

This is part of a series on the challenges and opportunities facing the Russian-Iranian partnership in the Middle East, based on contributions from participants in a closed LSE workshop in April 2021. Read the introduction here, and see the other pieces below.

Towards More Sustainable and Inclusive Tourism in Morocco?

Book Review – Kuwait and Al-Sabah: Tribal Politics and Power in an Oil State