Dissenting MPs in Egypt: A New Parliament Without Opposition? 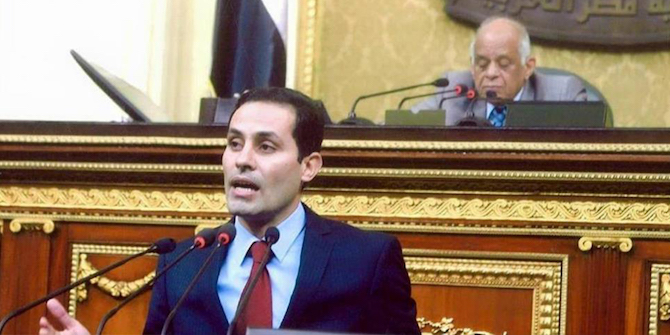 This January, the Egyptian parliament held its first session without the presence of the Egyptian opposition MP, Ahmed Tantawi, after his loss was announced in a run-off round in his home district of Qillin, in Kafr El-Sheikh governorate, despite Tantawi’s insistence that he had won. He lodged a judicial appeal over this, offering evidence of his vote lead over his competitors in the district, but without success, in a clear indication of the judiciary’s intent to form a new parliament without opposition voices, especially those of the 25-30 Alliance.

What were the prominent opposition stances Tantawi took in the last parliament, and did they lead to the government conspiring to fix the run-off election against him? What methods has Tantawi already begun to adopt to adapt to opposition from outside the parliament? What prospect of success can he expect, given the Egyptian regime’s determination to extinguish any opposing voices inside or outside parliament?

Tantawi from Inside and Outside the Parliament

On 25 December 2020, the Al-Karamah Party announced the election of Ahmed Tantawi as its Chairman, to succeed Muhammad Sami. Tantawi began by announcing his acceptance of his loss in the parliamentary elections, and the start of a reformist political movement to monitor the government and its decisions. This announcement led to great anticipation for the new political project among the existing political and media actors throughout Egypt.

As a result, Tantawi conducted several live broadcasts on Facebook to clarify the features of the new political landscape for him personally and for Al-Karamah, in addition to being hosted by BBC Arabic twice (on the programmes ‘Btawqet Maser/Egypt Time’ and ‘Bla Quiood/Without Restrictions’) to speak on what he intends to do in the coming period.

Tantawi’s appearances tended to be marked by a tactful, balanced and confident demeanour in talking about his loss in the elections and his political future, and his words are carefully chosen when making any references to the authorities. He thus avoids accusing the current government of fraud, oppression or authoritarianism – politically intelligent, Tantawi is well aware that he could be arrested at any moment, especially after losing his parliamentary immunity.

As for the political project, Tantawi has not included any political roadmap that opposes the current authorities in his statements. The party and movement are to act as observers of the current government’s legislation and decisions. Tantawi is ideologically a Nasserite, but with a more progressive outlook than the older generation of Nasserists. The youthful movement of which he is a part is concerned with women’s rights, civil and individual freedoms, non-social, political and human rights discrimination on the basis of sex and gender. It calls for social justice, fighting against poverty and hunger, and opposes neoliberal policies that harm citizens on behalf of the private and foreign economic sectors.

After Tantawi’s loss, some rumours circulated that he might intend to travel abroad for fear of arrest, but he denied this, stressing his intent to remain and provide opposition to the authorities from within Egypt. He said, ‘there is nothing that prevents me from opposing at home, with [my] full respect for those who decide to oppose from outside.’ Tantawi does not want to follow the path of the opposition outside Egypt, especially those now based in Qatar and Turkey, as he has emphasised his distance from the ideology of the Muslim Brotherhood. In recent years, Tantawi has avoided interviews on channels affiliated with the foreign-based opposition, such as Mekameleen, Al-Sharq and Al-Jazeera. Tantawi has accurately calculated that such appearances would lead to the Egyptian public identifying him as associated with these circles.

The Authority Tolerates No Opposition

The election loss resulted in intense dissatisfaction among Tantawi and his supporters due to reports of multiple irregularities, including bribes offered to voters by the government-aligned Nation’s Future Party, doubts about the counting of votes and the weighting of the results in favour of candidates loyal to the regime. The Nation’s Future Party commands close to 52 percent of the seats in parliament (539 elected + 28 appointed by the president, for a total of 568 seats) while the Support Egypt Coalition won 56% of the seats in the 2015 parliament, meaning that more than half of the seats in the last two rounds of voting have ended up in the hands of the party associated with the Egyptian state. However, the current parliament has now excluded a prominent opposition voice in the 25-30 Alliance.

There now remains a state of suspense between the political/security apparatus in Egypt and the political opposition personified by Ahmed Tantawi. The political authorities may wait for some time before arresting him, may try to entangle him in legal cases on charges of insulting the Egyptian state, its symbols and its judiciary, or may try in one way or another to restrict his media appearances if they continue or deviate from prescribed norms. For his part, Tantawi is keen not to extend his criticism to describing the oppression that the government exercises against political detainees, the restriction of the freedoms of citizens, or the regime’s brutal economic measures that have increased poverty and hunger among Egyptians. He instead prefers to talk about Al-Karamah’s continued mission to monitor government decisions that violate the constitution and the general interest of Egyptian citizens.

At the end of the last parliament’s term, another opposition MP, the Wafd Party’s Mohamed Abdel Alim Dawood, was expelled by the Speaker for insulting the Nation’s Future Party. The head of the Wafd Party, Bahaa al-Din Abu Shaqqa, promptly dismissed Dawood from the party, leading to his ejection from parliament, as the law states that MPs who have lost the confidence of their parties may be removed upon a two-thirds majority vote in favour. It appears the Wafd’s move (in tandem with the current representative of the senate, considered close to the state) to separate Dawood from the party, as a prelude to his removal from parliament, is evidence of the intention of the current regime to create a parliament without opposition.

COVID-19 and Female Labor in the MENA Region