Could a Job Guarantee Programme Save Jordan’s Economy? 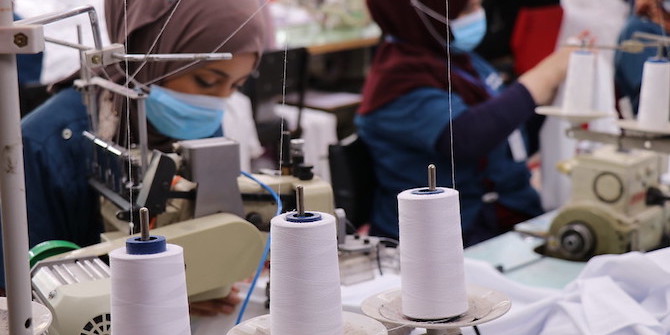 Jordan, a relatively young constitutional monarchy in the Middle East, continues to be impaired by its weak economy and high unemployment rates. The government could combat these systemic economic issues by instituting a job guarantee programme – providing stable employment for anyone who desires to work.

What is a Job Guarantee?

A job guarantee programme is a ‘a public policy that provides an employment opportunity on standby to anyone looking for work, no matter their personal circumstances or the state of the economy.’ These programmes combat economic downturns and chronic unemployment by providing steady work at a living wage. By providing stable employment, the demand for expensive support services such as unemployment subsidies or food aid would decrease as people become available to provide for themselves.

One way to implement these programmes is through a ‘bottom up’ approach which allows people to aid in job creation in their communities. This system creates jobs related to local needs such as public services and constructing community goods as necessary and recommended by the local community. These programs bolster development of infrastructure and services and strengthen the national economy by decreasing unemployment and allowing individuals to learn skills which they can use to obtain long-term employment.

Jordan’s development is hindered by its weak economy, which is heavily dependent on foreign aid and investment. Though the economy never experienced significant growth, its current economic rut stems from the combined impact of the 2008 global financial crisis, the 2011 Arab Spring uprisings, and the influx of Syrian refugees, and its economy has yet to recover. Since then, the deficit and unemployment rates continue to increase to the detriment of the Jordanian people.

Trade, finance, tourism, and services are the largest sectors of Jordan’s economy and gross domestic product. The service sector is the largest by far, making up 70% of GDP and 80% of jobs. Nearly half of all workers are employed by the government, most of whom work in services such as construction.

The biggest economic issue is the country’s chronic high unemployment, which reached a historic high in 2020 at approximately 25%. Though the economic effects of the coronavirus pandemic significantly contributed to this spike, unemployment has been increasing for over a decade, and in the last twenty years only dropped to 11.9% at its lowest point. Women, youth and refugees are particularly impacted by the insufficient job market. Though more women are entering into the workforce than ever before, they face more difficulties than men in finding employment. The Jordanian education system is among the best in the Arab world, but its graduates struggle to find appropriate job opportunities and are reluctant to take positions they feel are ‘beneath them’. Additionally, the growing population of Syrian refugees in the country does impact the job market, but these individuals cannot work without appropriate permits, which have only been granted to roughly 100,000 of the approximately 650,000 Syrian refugees.

A main factor contributing to the high unemployment rate is the mismatch between skills and demand, wherein Jordanian workers are more skilled than necessary for the majority of the open opportunities, which are primarily in the informal service sector. Jordanians are not interested in these menial labour jobs, which are instead taken on by the migrant population. For this reason, a large number of Jordanians work and live abroad where they can find positions which fit their skillset.

A Job Guarantee in Jordan

Some economists and theorists speculate that job guarantees cannot work in developing countries whose economic balance could be thrown off by the sudden rise in consumer spending and demand for foreign goods. Given that developing countries tend to have relatively small formal sectors and may only produce a limited range of goods, a rapid change in GDP can put pressure on the exchange rate. Countries which peg their currency to another, as Jordan does, are at greater risk of experiencing these problems. That said, it is not impossible for job guarantees to succeed in developing countries. The government can prevent these issues by carefully implementing their job guarantee such that the minimum wage starts close to the average amount paid in the informal sector, and by employing workers on projects which support domestic good production.

To combat its persistent unemployment and ongoing recession, the Jordanian government should implement a job guarantee program. In Jordan’s case, it may be better to add job guarantee positions which support more high-skilled parts of the economy. There is significant room for development and job creation in the energy, information technology and tourism industries, which could be staffed through the job guarantee. Given that Jordan is most lacking in job opportunities for skilled and educated people, it would benefit most from job creation in industries which incorporate more advanced skills, even if these skills are not necessary for the low-level and service jobs created in these sectors through the program.

To prevent the aforementioned economic shock caused by rapidly increasing consumer purchasing power and the amount of money in circulation, the Jordanian government should start small, focusing on one sector or city at a time, and gradually grow the programme’s capacity. This method saw success in Argentina, where the government implemented a job guarantee following its economic recession in 2001. The Argentinian program was limited in scope to heads of households and created two million jobs in two years. The program played a key role in the recovery of the Argentinian economy, which slowly moved out of its deep recession. Though Jordan is not in an economic crisis as deep as Argentina’s, the success of that programme suggests that such slow, targeted implementation of a job guarantee can successfully bolster the economy of a developing nation.