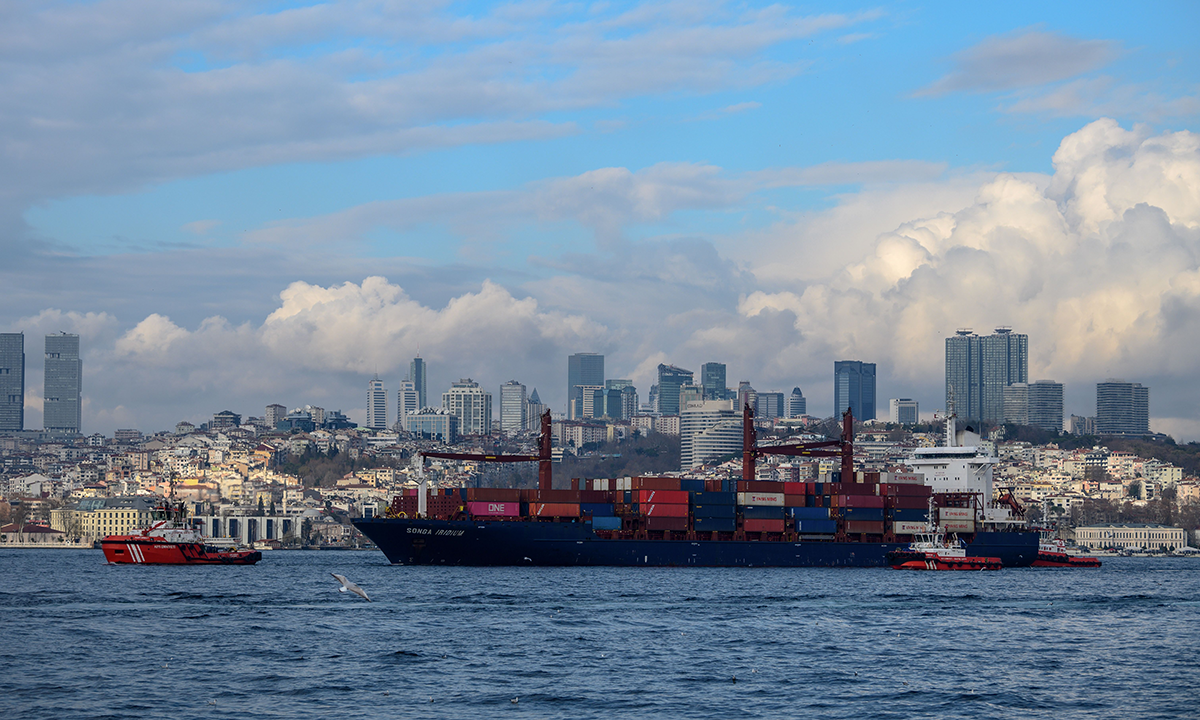 
The Turkish government recently confirmed that the country has approved development plans to carve a new passage between the Black Sea and the Sea of Marmara. Cutting through forests and farmland, the new Canal Istanbul would run parallel to the Bosphorus for a total of 45 km (28 miles) with a depth of 20.75 meters (68 feet) and a width of 275-350 meters (900 to 1150 feet).

Ground-breaking for the first bridge over the proposed canal is scheduled to take place on June 26. However, this will be a ceremony for domestic political consumption and by no means indicates that construction is really starting. Financing the massive project might prove impossible due to the environmental concerns and investment risks hanging over it. Even the Turkish banks that might come under political pressure to get involved have said that the global sustainability pact that six of Turkey’s top banks have signed is a barrier to funding Canal Istanbul. Additionally the questionable private-public partnerships (PPP) that the government has used to build new hospitals, bridges, and airports have entailed a growing cost to the public purse. The government drastically over-estimated revenues, which it guaranteed (in dollars). As a result, over the past two years alone billions of dollars in public funds have gone to covering shortfalls in revenue guaranteed for transportation and other concessions,1 even as the value of the Turkish lira continues to fall.

Traffic in the strait has increased enormously since the signing of the Montreux Convention in 1936. The convention introduced certain restrictions to manage the maritime traffic through the strait. It provides for the right of free passage for merchant vessels, while the transit of warships is subject to restrictions. Turkey does not issue transit “permits” and cannot charge hefty fees for passage like the Suez Canal, but oversees the implementation of the treaty rules about the tonnage and type of ships that can enter the Black Sea, unless Turkey is officially at war.

The Turkish Straits have a particular importance in terms of global energy security, as approximately 3% of global oil demand is transported through them. The number of tankers passing through the strait has been decreasing since 2002 in part because of the Turkish government’s successful promotion of oil and gas pipelines. Aiming to be a regional energy transit and trade hub, Turkey has undertaken several important natural gas2 and oil3 pipeline projects. It’s unclear whether Turkey’s new gas finds will be commercially attractive and add additional tanker traffic, but for the first time Turkey shared the data on its Black Sea discovery with Chevron and Exxon.

Bold claims and plenty of risks

Proponents of the Canal Istanbul project claim it will allow for increased ship traffic through the strait; provide safer transit conditions for dangerous ship traffic, away from densely populated areas of Istanbul; reduce waiting times for entry; and provide generous transit fees to Turkey. It was also suggested that the canal might create a workaround to the Montreux treaty’s limits on access to the Black Sea for non-Black Sea countries’ naval forces.

However, the need for a new canal has not been demonstrated. Shipping companies are not demanding a new route and the data don’t support the idea: While tonnage is increasing slightly, the number of ships is actually declining. Although there have been occasional mishaps and accidents on the Bosphorus, no major accident has occurred for over 40 years, due to traffic management improvements introduced by the Turkish government. Further improving transit safety does not require new construction. It can be achieved faster, cheaper, and easier by investing in coastal safety staff, state-of-the-art maritime tugs, and navigational equipment.

There are also significant potential environmental risks. The new canal would destroy two of Istanbul’s water reservoirs and risk contaminating all of the groundwater reserves of Istanbul and the Thrace region4 — an irreversible process.

Although global attention is focused on the canal, which could cost somewhere around $20 billion once the value of new and displaced infrastructure is factored in, the entire project’s construction contract value translates into a $250 billion spending spree to the end of decade. All of Istanbul’s highways, roads, water pipes, power lines, gas lines, and entire neighborhoods would have to be displaced and rebuilt. In this mother of all construction projects, the opportunities for corruption and cronyism are legion. Early investors, among them government ministers and the Qatari emir’s mother, Sheikha Moza bint Nasser, already made hefty profits from land speculations on the route of the canal.

Russia presents another problem. Knowing Turkey well, Russia views the canal project as a domestic political maneuver. That is why they have been keeping quiet. They don’t believe the project will actually go ahead. However, if Turkey were to signal any changes to Montreux, Ankara would have to expect a more robust reaction. After Foreign Minister Sergey Lavrov and the Russian ambassador said they won’t renegotiate Montreux, Turkey even edited the canal project’s environmental impact report to specify that all Montreux conditions would apply to the new canal, and the Bosphorus would remain open to traffic.

The average wait time to enter the Bosphorus is 13.7 hours,5 as measured over the past 13 years. This is partially due to weather conditions like high winds and fog, and partially due to the lack of coastal safety equipment like tugs and firefighting boats that accompany tankers. The catch is that the new canal would be affected as much as or more than the Bosphorus is by wind, fog, weather, and currents. Istanbul’s Black Sea coast is famous for its strong winds, which could easily cause an Ever Given-like blockage in the proposed canal. For a fraction of the cost of a new canal, it would be possible to increase coastal safety staff and provide new and more modern tugs and navigational equipment.

Furthermore, the assumption that passage through the proposed canal would be safer than the Bosphorus is wrong. Narrow and shallow canals are so much more difficult and dangerous to navigate, as the entire world witnessed recently with the container ship Ever Given in the Suez Canal. Strong wind, current, any mechanical or engine failure, or human error could cause ships to veer off course and block the entire canal. In fact, most of the ship captains talking to the DW Turkish service said that they would prefer the Bosphorus to the canal.

A major question about the proposed canal is whether it could bypass the Montreux treaty, thus allowing unlimited access to the Black Sea for non-Black Sea countries‘ naval forces. This is the wrong question. Montreux is not preventing a meaningful NATO-flag naval presence in the Black Sea, because in an average year, NATO ships use less than 20% of the quota that Montreux allows for non-Black Sea naval ships. And from a legal standpoint, Montreux covers the Turkish Straits, Bosphorus, and Dardanelles as one single system, a 164-mile maritime transit route from the Aegean to the Black Sea. There is no legal basis for bypassing Montreux unless separate canals were to be constructed to bypass both the Bosphorus and the Dardanelles. The relevant questions are how to provide maritime security in the Black Sea, limit Russia’s territorial incursions toward NATO partner countries like Ukraine and Georgia, and perhaps how to counter Russian meddling in Turkey’s new energy projects in the Black Sea. What’s needed is a permanent NATO group, consisted of rotating ships in line with the Montreux treaty’s time limitations.

Canal Istanbul has been undertaken to pump money toward companies friendly to the government and as a real estate scheme. The project is not needed for commercial or naval maritime purposes.

Yörük Işık is a geopolitical analyst based in Istanbul, where he runs the Bosphorus Observer, a consultancy analyzing maritime activity on the Turkish Straits. He is also a non-resident scholar with MEI’s Turkey Program. The opinions expressed in this article are his own.