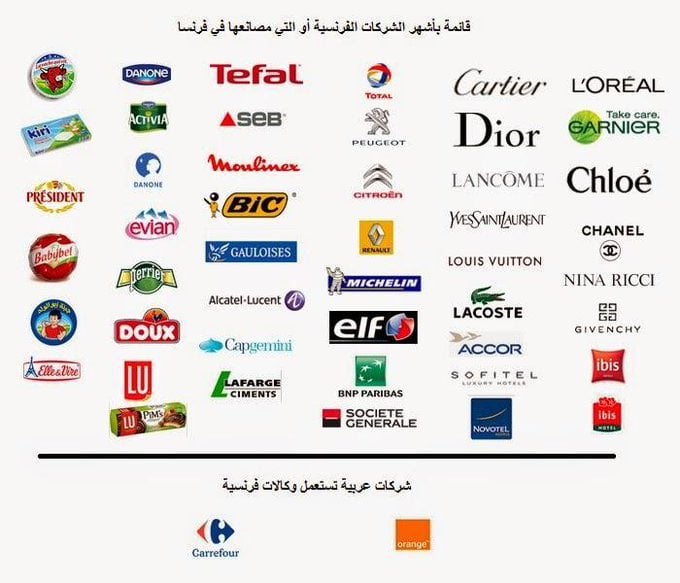 
A social media campaign has been launched calling for the boycott of French products from supermarkets across the Middle East and North Africa in protest at President Emmanuel Macron’s recent comments on Islam and his backing of satirical outlets publishing caricatures of the Prophet Muhammad.

Earlier this month, Macron said Islam is a religion “in crisis all over the world today”, and pledged to fight “Islamist separatism” that is a threat to some Muslim communities around France. He also voiced his support of satirical magazine Charlie Hebdo’s right to print cartoons of the prophet, which has drawn widespread anger and outrage across the Muslim world.

Activists and several Arab trade groups have since announced their boycott of French products, launching a number of social media campaigns using viral hashtags like #BoycottFrance #Boycott_French_Products and #ProphetMuhammad.

As the French government and elites continue to treat Muslims like second-class citizens who can be demonized for political points, consider speaking against them with your money by boycotting French products. #BoycottFrance pic.twitter.com/6N8sdiLc8x

If you think #BoycottFrance will have no effect,you’re truly mistaken

Better yet national economic policies (which we should lobby our countries to implement) will create tremendous impact pic.twitter.com/SvvulaUWVQ

A list of French brands to boycott was circulated on Twitter with users encouraged to avoid buying products like Lancôme, Yves Saint Laurent, Louis Vuitton, Chanel and Givenchy.

Since Friday, French products have been removed from supermarket shelves in Qatar, where Qatar University also cancelled its French Cultural Week event, Palestine and Jordan, where the head of the Amman Chamber of Commerce, Khalil Haj Tawfeeq, wrote to the French ambassador to Jordan to apologise for the French product removal.

In Kuwait, the chairman and members of the board of directors of the Al-Naeem Cooperative Society declared their boycott of all French products and their intention to remove them from supermarket shelves.

Similar calls were also made in Algeria, Tunisia, Egypt, Iran and Morocco. In 2019, French-owned Danone lost more than 50 percent of its market share in milk in Morocco after Moroccan activists launched a consumer boycott campaign against major suppliers of petrol, milk and water in protest of rising prices.

Calls for protests were also made in the Gaza Strip on Monday and in Amman on Tuesday, which follows rallies that were held in Tunisia and parts of Syria over the weekend.

Macron responded to the boycott campaign with a tweet in Arabic in which he stated: “Nothing makes us hold back, ever. We respect all differences in the spirit of peace. We do not accept hate speech and defend reasonable debate. We will always stand by human dignity and universal values.”

Macron’s comments on Islam came in response to the beheading of teacher Samuel Paty outside his school in a suburb outside Paris earlier this month after he showed cartoons of the Prophet Muhammad during a class on free speech. France has since adopted a number of reactionary policies in a bid to curb “extremism” in the country, by seeking to strengthen a 1905 law that separates church and state, arresting a number of foreign nationals and targeting Muslim organisations.

French Culture Minister Roselyne Bachelot has called for “appeasement”, reaffirming that France is not fighting “against French Muslims” but against “Islamism and terrorism”. The comments came a day prior to those made by the French Foreign Ministry declaring that “calls for a boycott are baseless and must stop immediately, as must all attacks against our country, exploited by a radical minority.”

However, not all French Muslims have voiced their support of the boycott.

The boycott against France is stupid,
The French government and Macron are stupid,
And the reason why I am making both of these statements have nothing to do with caricatures and everything to do with the wrong motives and arguments of both sides.

The head of the Grand Mosque of Paris Chems-Eddine Hafiz also condemned the boycott calls, accusing it of being rooted in “those who have always used Islam for political purposes”. Hafiz also called for “vigilance of all Muslims in the face of this false propaganda aimed at discrediting our country, France”.

Shortly after the beheading, French imams visited the school where Paty had taught to pay their respects, and called on Muslims to rally behind freedom of expression.

Hassen Chalghoumi, an imam at Drancy mosque, described the victim as a “martyr” and “wise man” who “taught about tolerance, about civilisation and the respect of others” and spoke of his desire to see Muslims organise together to mourn the teacher with candles.

In addition to the online campaign, a number of heads of states have been quick to condemn Macron and the increasing hostile environment in France. Turkish President Recep Tayyip Erdogan, whose relationship with Paris has been rocky over the last couple of years, called on Turks to boycott French products on Monday.

France’s ‘crisis’ with Islam: A legacy of 200 years of colonial brutality

On Friday, the 57-nation Organisation of Islamic Cooperation condemned what it said was France’s continued attack against Muslims by insulting religious symbols. Saudi Arabia’s Council of Senior Scholars also released a statement stressing how offending the prophet and other Islamic figures will not harm  them but will serve “those who want to spread the atmosphere of hatred among human societies”.

“He made false accusations against Islam, that have nothing to do with the true essence of this religion,” Al-Azhar’s Islamic Research Academy said in statement late Saturday.

Defenders of the caricatures have portrayed the issue as a matter of freedom of speech, but critics have pointed out how it has been used to stir anti-Islamic sentiment in France and its weaponisation against the country’s Muslim population which constitute around 6 million.

Last week, two veiled Muslim women were stabbed in Paris near the Eiffel Tower by two women reportedly calling them “dirty Arabs”. A few days later, two Jordanian students were attacked in the West of France after they reportedly were overheard speaking Arabic, which has fueled fears of increasing Islamophobia and racism in the country, buoyed by far-right scaremongering and threats.

The attacks come on the same week as criticism from French Interior Minister Gérald Darmanin of halal and kosher food aisles in supermarkets contributing to separatism and radicalisation, and accusations from the finance minister that mayors who allow women-only hours at local swimming pools are giving in to “political Islam”, which he believes is the root of terrorism.

Today, more than 170 Black and Jewish leaders from the entertainment industry released a unity statement to launch the Black-Jewish Entertainment Alliance, a...
Read more
Magazine

Some of Egypt’s Top Female Leading Ladies of the Silver Screen: Then and Now

Some of Egypt’s Top Female Leading Ladies of the Silver Screen: Then and Now There are some names that are absolutely never forgotten; some...
Read more

What Biden’s election means for Hezbollah