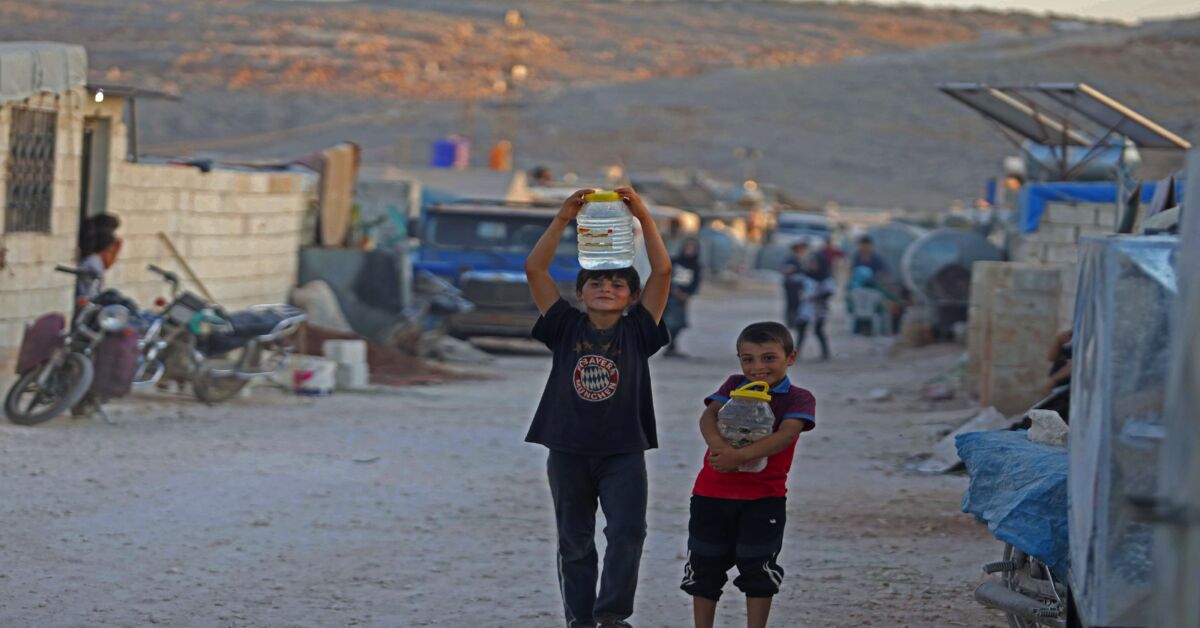 
IDLIB — Over 1 million displaced people in northwestern Syria live in over 1,270 camps, according to the Syria Response Coordination Group.

These camps lack infrastructure, including sanitation and water networks, and their residents depend on unsterilized water tankers, making them vulnerable to infectious diseases.

According to a previous United Nations report from March 2020, “Throughout the country, 15.5 million Syrians lack adequate access to clean water. Northeastern Syria is the area most affected by the water crisis: 27% of households spend as much as one-fifth of their income on water from tankers.”

The report added, “Contamination of water sources, caused by deteriorating infrastructure and wastewater flooding, directly and deeply affects the health of Syria’s citizens.”

The water sold by street vendors is from unknown sources and unhealthy since it lacks all safety standards. It is brought from places that store water in large ponds, which increases its contamination since it is exposed to dirt and dust and birds drink from it. The water is then transported by cars with a tank of between 20 and 25 barrels. Every five barrels are sold for about $2, which further burdens camp residents who are already unemployed.

Amer Msaher, a coordinator of water projects at Maram Foundation covering some camps in Idlib countryside, told Al-Monitor, “The biggest problem that the camps face is the shortage of water, the high price of water tankers, and the inability of a large segment of the population to secure water, especially those who do not have a water tank. Some organizations would provide water supply services to a large number of camp residents with at least 25 liters per person per day, as part of their water and sanitation programs. They would make sure the water is placed in sterilized tankers to reduce contamination and thus limit the risks of health issues that can result from drinking this water. However, these organizations have generally stopped supporting the water sector, and many projects that provided water for the population have been suspended.”

Msaher added, “As the population increases in northwestern Syria due to the displacement of hundreds of thousands from their areas that were controlled by the Syrian regime, wells are being randomly drilled, and this also led to a decline in the groundwater reserves. Over time, this may lead to water scarcity in the area, especially with climate change, high temperatures and lack of rainwater. Some humanitarian organizations resort to solving the water problem or reducing it by digging artesian wells to supply the camps with their needs of water, but despite these efforts, it is not possible to cover all camps.”

Ahmed Abu Yazan, director of Ataa camp in the northwestern countryside of Idlib, told Al-Monitor, “Our camp is inhabited by 30 families and has no water service. Everyone here buys water from unknown sources, and this increases health risks and burdens families financially. We submitted several requests to the Syrian Salvation Government (affiliated with Hayat Tahrir al-Sham), but no one responded to us. We knocked on the doors of several organizations and failed to get help to provide water for our camp. Some organizations provide camps with their needs of water and sterilize it, but do not sterilize the water that we buy from unreliable sources, causing major health problems for a number of families, especially children. Last year, dozens of children and adults suffered from enteritis due to contaminated drinking water.”

Mohammed Abu Omar, a resident of Bassamis camp in the northern countryside of Idlib, told Al-Monitor, “We suffer from a lack of drinking water and we were unable to get any party to secure water for us, neither a government agency nor a humanitarian organization. We buy water that is not suitable for drinking naturally and is unhealthy. It is not even suitable for preparing tea or coffee; it is so contaminated that it does not even boil right. Due to the lack of water, we shower less. In winter, the roads are blocked and water tanks cannot reach our camp. Since the water we do get is contaminated, many camp residents suffer from kidney problems such as kidney stones and gallbladder [problems].”

The scarcity of water and the lack of abundant sources also impede the work of the Civil Defense (known as the White Helmets) volunteers in northern Syria, as it takes them a long time to secure water before they can put out a fire. The White Helmets rely on springs and private wells to supply the tanks for firefighting.

The problems of water scarcity and its contamination are not limited to the camp population only, but also includes all parts of Syria in general. The UNDP estimates that “70% of the Syrian population is without regular access to safe drinking water because of water cuts and destruction of basic infrastructure.”

The UNDP noted that “ensuring universal access to safe and affordable drinking water for all by 2030 requires that we invest in adequate infrastructure, provide sanitation facilities, and encourage hygiene at every level.”

According to UN data, about 15 million people across Syria need assistance to obtain water, as families spend up to 25% of their income to meet their daily water needs.

The Middle East – a conflict zone between China and Russia?